As Uvalde mourns 21 school shooting victims, church members show ‘the love that Christ put in all of us.’

The fourth-grader received two accolades at Robb Elementary School that Tuesday morning, May 24: A/B Honor Roll and Library Citizenship. Her father, Britt, picked her up early since her classwork for the day had concluded.

He entered the same hallway Emmaline, 10, had just walked through, passed her classroom and killed 19 of her classmates and two of her teachers.

Across the campus, the ensuing lockdown trapped Emmaline’s second-grade cousin Arianna inside the school.

It would be hours before city officials reunited Arianna safely with her parents at the city’s civic center, and even longer before Emmaline saw her mother, Janna Whyrick. 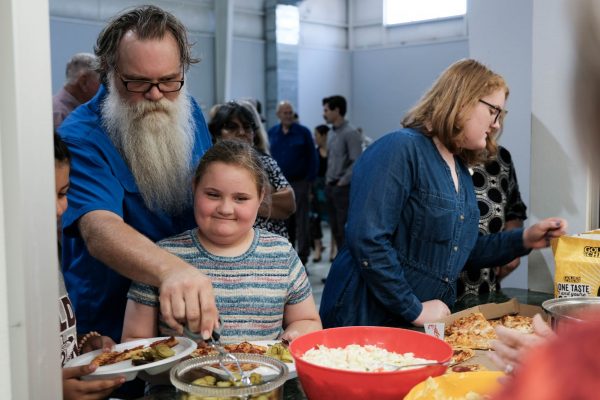 Emmaline and her father, Britt, enjoy a fellowship meal at the Getty Street Church of Christ the Sunday after the school shooting.

Whyrick, a radiographer at Uvalde Memorial Hospital, was working when the ambulances and buses began arriving with shooting victims. Knowing her own daughter was safe, the Getty Street Church of Christ member focused on trying to save others’ children.

It is a day Whyrick, who declined an interview request, can’t recount without breaking down.

“She saw things that nobody should ever see,” Whyrick’s mother, Renee Potter, said while choking back tears. “And she couldn’t hug her child because she was in work mode trying to save others.”

‘A man who cried’

Across town, Whyrick’s father, Chris Potter, headed to Uvalde’s civic center. As the minister for the Concan Church of Christ about 20 miles north of Uvalde and a retired member of law enforcement, Potter knew the waiting families would be in spiritual need.

He had placed Isaiah 41:10 on the Concan church’s marquee only hours before:

“So do not fear, for I am with you; do not be dismayed, for I am your God.

I will strengthen you and help you; I will uphold you with my righteous right hand.” 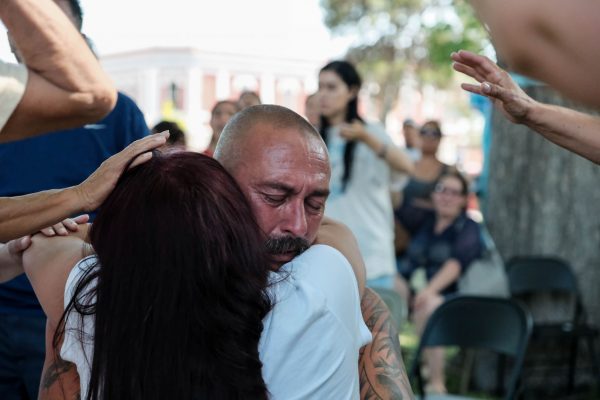 Two people in tears embrace in front of the memorial crosses as others around them pray.

He joined ministers from many denominations, all offering prayers and spiritual guidance.

As confirmations of death arrived from the hospital and authorities notified the families, Potter and other ministers stood vigil nearby. They did what little they could to offer comfort during an inconsolable time.

“The wailing, the crying,” Potter said, recalling when families received tragic news. “It was pretty heart-rending.

“If you look at the example of Jesus, you see a man who cried, who wept. When Mary was wailing, this was not just softly crying. This is wailing, weeping, heartfelt grief. This is what this town is feeling.”

“If you look at the example of Jesus, you see a man who cried, who wept. When Mary was wailing, this was not just softly crying. This is wailing, weeping, heartfelt grief. This is what this town is feeling.”

Joe Perez has done his own fair share of crying during the past eight days.

As the Spanish minister for the Getty Street church, he is closely connected to the predominantly Hispanic community of Uvalde. Almost 90 percent of the student body at Robb Elementary is Latino. The small town is about halfway between San Antonio and the U.S.-Mexico border.

He heard the sirens that day from his church office less than a mile from the school. He didn’t think much of it, until the sirens didn’t stop.

At home that evening, Perez and his wife, Yolanda, cried for hours, mourning the dead children and teachers, aching for the families who had lost them.

They wept again when they visited with two of the grandfathers whose families lost children.

“One of them, he had already shed too many tears, so I shed one for him,” Perez said. “The other grandfather … he said simply, ‘I guess God needed more angels, so he took these children here.’ And I agree.” 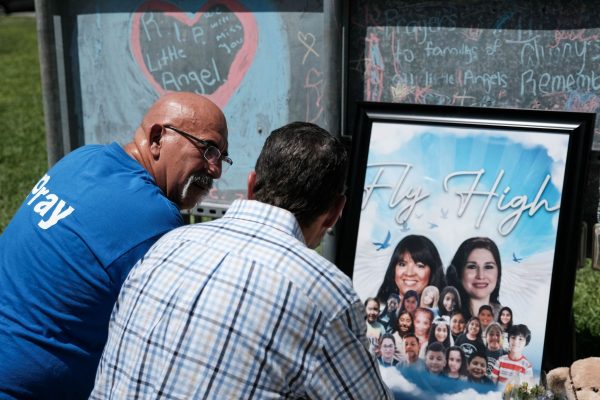 Two men kneel in front of a framed picture showing all the victims.

Since that tragic Tuesday, Perez has stood watch at the Getty Street church for 12 hours every day, sitting out front in the lobby, just in case someone knocks on the door.

Three ministers with Churches of Christ arrived at the Getty Street building the day after the shooting to offer the community free counseling services and spiritual guidance.

The phone rings constantly with calls: ministers from all denominations, members of Churches of Christ from across the nation, people from the community. Many ask what they can do to help and where to send donations. Others just want to talk. Some cry.

“Directly affected or not, people from all over the United States have come to mourn,” Perez said. “And they shed tears. Even though they knew no one, they still shed tears. And that’s love, it’s the love that Christ put in all of us.”

In the community of 16,000, everybody knows someone who was directly affected. 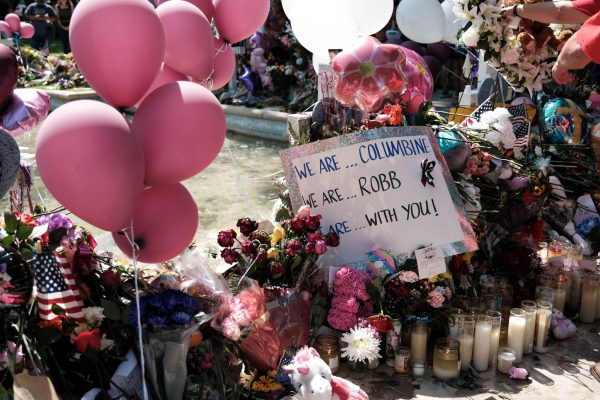 A sign left by Columbine shooting survivors at the courthouse memorial shows solidarity.

The Potters’ postman delivers mail to four families who lost children. The custodian of the Getty Street church lost two cousins. A church elder’s assistant manager lost his son and niece; another coworker lost their child.

But as the town collectively grieves, residents’ ties to each other only strengthen.

On Wednesday, May 25, mourners from across South Texas packed into the dirt arena and stands of the Uvalde County Fairplex, many wearing maroon, Uvalde High School’s color. Over 1,000 attendees shared prayers, hymns and tears throughout the evening. 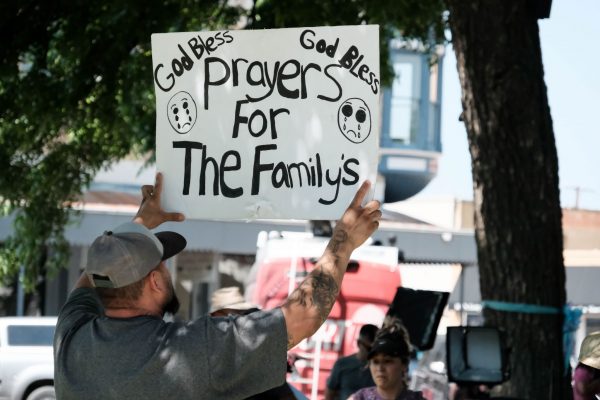 Alex Covarrubias holds a sign asking for prayers for the victims’ families in front of the courthouse on May 28. Covarrubias, who does not have a job, has stood at the memorial every day since May 25.

Emmaline, in attendance with her family, ran to hug her friends. Her early departure from school meant she didn’t know which of her friends had survived the deadly attack.

Members of the Uvalde Ministerial Alliance, formed by community ministers — including Potter — of assorted denominations, led a prayer during the vigil, which ended with a rendition of “Amazing Grace.”

“We are unified despite our differences,” Potter said. “Disagreements, we’ve put them aside. We’re here to heal, mend. It’s an active time that we have to be a part of, and I think God is calling us to the forefront.”

That’s evident as his family — at least three generations — gathers on the lawn in front of the Uvalde County Courthouse, where community members have set up crosses and memorials to the victims. The Potters stand next to their granddaughter, Emmaline, and her parents, Britt and Janna, holding signs that offer free hugs to those in need.

There is rarely a pause in between hugs.

“When everybody’s gone, when the media is gone, and people have had time to kind of heal … we will be there,” Renee Potter said. “This town will be there for each other. We’ll get through it.” 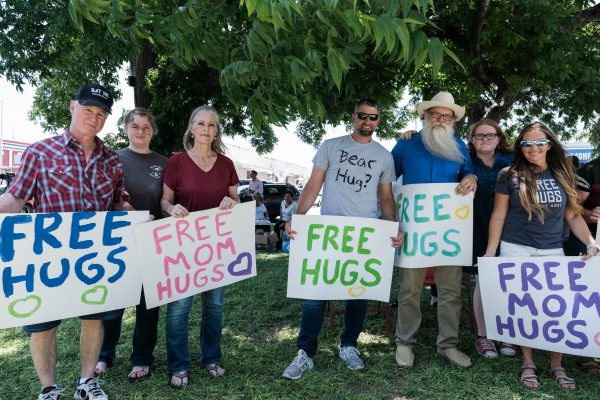 The Potters, on the left, join other family and friends at the courthouse memorial with signs offering free hugs on May 29.

An account has been opened at First State Bank of Uvalde for the families of Robb Elementary. If you would like to donate to the Robb Elementary Memorial Fund, you can do so at any FSB branch. Make all checks payable to the “Robb School Memorial Fund” and mail to:

Online donations can be made at https://onestarfoundation.org/uvalde/.

Funds can also be donated for ministry work to the Getty Street Church of Christ via checks earmarked for the Uvalde crisis or online through the Givelify link at www.uvaldechurch.com.