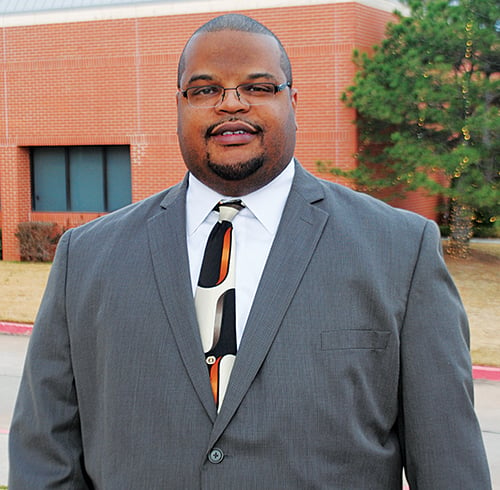 ‘This is not a race issue, it is a humanity issue’

Lynn McMillon
President Emeritus
In the midst of violence and turmoil, Conley Gibbs Jr. seeks to be a voice of reason and compassion.

He serves as minister for the Ferguson Heights Church of Christ in Missouri, a 200-member congregation near the epicenter of clashes between protesters, rioters and police after the Aug. 9 shooting death of Michael Brown, an 18-year-old black man, by Darren Wilson, a white Ferguson police officer. In recent weeks, church members have helped people in their community, providing for the needs of those who have found their access to shopping blocked by police or the National Guard.
Conley preached his first sermon at age 12, under the guidance of minister David C. Penn, at the Robbins Church of Christ, near Chicago. He earned a bachelor’s in human development from Amridge University in Alabama and a master’s in organizational leadership from St. Ambrose University in Iowa. He worked in student services at Robert Morris University in Chicago and transitioned to full-time ministry.
He served Churches of Christ in Illinois, Indiana and Michigan before moving to Ferguson Heights two years ago. He serves on committees including the advisory board of the National Lectureship, the largest gathering of predominantly black Churches of Christ in the nation.
He has published a book on marriage: “A Symphony: Creating the Sound of Marital Harmony

.” He and his wife have a son, a student at Oklahoma Christian University in Oklahoma City, and a daughter who attends college in St. Louis.
In recent months, “Ferguson” has become a synonym for racial tension. How do you and members of the Ferguson Heights church feel about that?

In reality, this is not a race issue. It is a humanity issue.
We want to make sure that human dignity, respect and concern trump any efforts to minimize this to an issue simply of race.
If race is indeed the issue to be addressed, then it should be addressed within the context of the bigger issue — a heart issue — that results from the corruption from sin.

We’ve seen images of violence in Ferguson on our TV sets. What are the cameras not showing?


The media gives the impression that this issue has polarized race relations. I do not believe all African-Americans have the same view. Neither do I believe that about all Caucasians.
In fact, the news would have you believe all the protesters are African-American and that all the Caucasians are outraged about the protests. There is a vast, considerable number of Caucasians of all ages who participated in the protests. Many Caucasians share the concern about excessive policing, economic disparity and the injustice they witness in the treatment of others.
If people think that only the African-American community is outraged by what happened, I invite them to come and see for themselves that this is not just an issue being addressed by one race of people.
As the Queen of Sheba states after she witnesses firsthand the splendor of King Solomon, half of the story has not been told.

Tell us about the Ferguson Heights church and its connection to the community.


We are blessed to have a well-blended demographic of individuals by way of age, profession and background. We really do have a great blend — younger and older people, blue-collar workers and high-level professionals.
Also, we have a lot of people who grew up in the Churches of Christ and a great number who were converted from denominations. This allows us to operate with a greater sense of balance in how we view matters.
Even though most of our members do not live in Ferguson, we do feel connected to the plight of this community. After all, we not only worship in Ferguson, but we also share concern with the brokenness experienced by those around us.
This case has brought about a greater visibility for the church because of our geographical proximity to the incident. We have been asked by a number of organizations and community interests to be a resource for social improvement. This has allowed us to access resources, contacts and opportunities like never before.
I have reminded the congregation of Mordecai’s words to Queen Esther in the Old Testament, believing that God has called us to the Kingdom for a time such as this.
We do not consider our role “special” in the sense of our significance, but we do consider it special in that we have to fulfill God’s purpose by serving those around us.

Tell us about the recent prayer service hosted by Ferguson Heights.


In the wake of this unfortunate tragedy, the hearts of African-American and Caucasian members have been awakened to the need for spiritual healing and renewal.
We held a multiracial prayer service that brought hundreds of members from churches all around the area. Now we are doing more together than we have in the immediate past.

How have you seen these events impact the church’s members?

I see our members eager to help and wanting to be involved in real solutions — not just the rhetoric.
Whenever an opportunity to help has presented itself, we’ve had a tremendous response from our members. That shows they care beyond mere words.