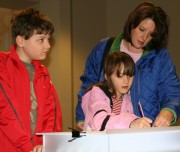 This Bible will have personal touch

Kay Campbell
HUNTSVILLE, Ala. — When Kayleigh Maroney, 8, leaned over the table on Dec. 4 at Mayfair Church of Christ to write a verse of the Bible, her face was beaming.
Part of the glow came from the paper itself, taped onto a light box so she could see the lines and keep her careful letters straight. And part of the light came from her pride in being part of a nationwide trail of 31,173 people who will each copy one verse of the Bible to make a handwritten edition for publication next year.
The project, Bible Across America, celebrates Zondervan publishing house’s 30th anniversary of the New International Version of the Bible, one of the country’s most popular modern translations.
“I didn’t make a mistake,” Kayleigh said after she’d copied her verse, a fearsome one in I Kings 16 about the treacherous Zimri usurping the throne of Israel by killing the drunken King Elah and all of Elah’s cousins.
Kayleigh couldn’t exactly say why God wanted this episode recorded in a holy book.
Luckily, her brother, Nathan, had an explanation: “For punishment. And warning.”
NASA workers stopped by on their lunch break. Grandparents brought their grandchildren. Moms came with their homeschooled children. Teenagers dropped by after school. Husbands arrived, then waited so their wives could join them.
“They want their verses to be together, almost like they can have their writing touch,” said Susan LaCaze, a member of Mayfair who was filing the names of the afternoon scribes. The roll of writers will be printed in the Bible’s index.
The project emphasizes the importance of each word in even obscure verses like Kayleigh’s, LaCaze said. Writers labored over their words, repeatedly glancing from the card on which their verse was printed to their own writing to make sure nothing was missing.
Mistakes have been surprisingly few, said Jon Helton, who, with his wife, Mandy, is accompanying the tour cross-country in a 42-foot RV. And for the worst of the blotches, well, there’s forgiveness – “and Wite-Out,” Helton said.
The tour, which began Sept. 30 in Grand Rapids, Mich., will end March 14. The stop in Huntsville happened on short notice when some mechanical problems in South Carolina forced a rerouting of the announced trail, said Tara Powers, a spokeswoman for Zondervan. The RV was scheduled to be in Memphis next.
When Joe Essner, minister for adult education at Mayfair, learned of the reroute down I-65, he invited the nondenominational tour to Huntsville. Then he sent out an alert on the e-mail contact list of other congregational leaders he had developed during the days of Hurricane Katrina, when Huntsville’s religious community rose up with relief as strong as the storm had been.
“This is good for the community,” Essner said as he snapped pictures of his mother, Margaret Essner, 84, copying her verse.
Essner pointed out that no one checked anyone’s doctrinal orientation, church membership, politics or personal godliness at the door. The Bible project attracted scribes whose words slanted as many ways as there are personalities, he said.
“With all the things this country is divided on,” Essner said, “this is one thing people from every walk of life can come together for: one handwritten Word.”
(Story used with permission.)