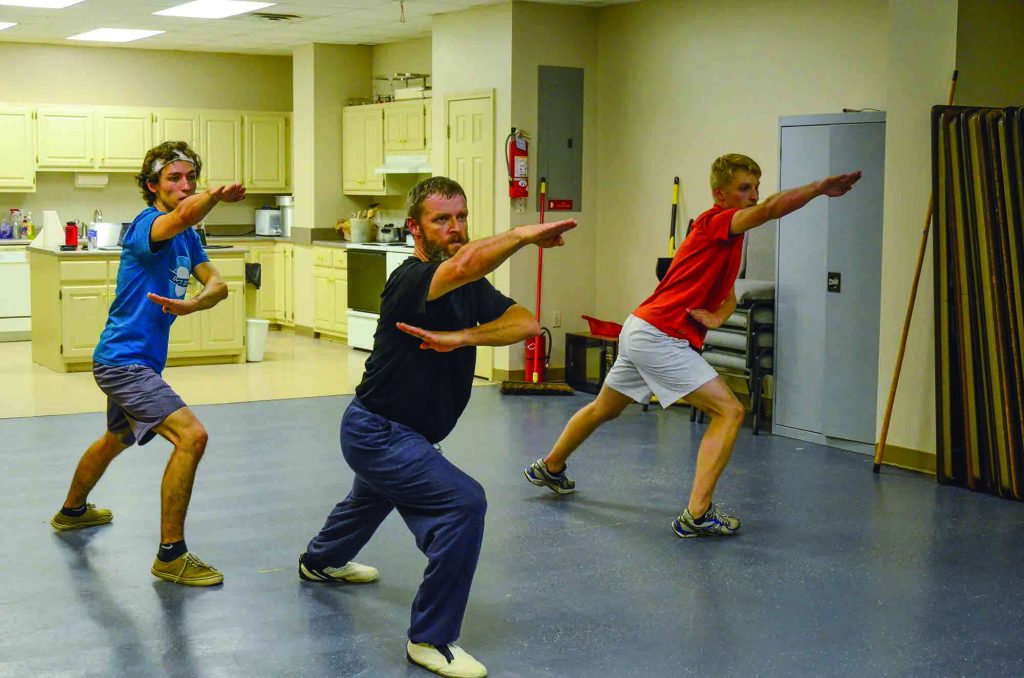 The spiritual discipline of kung fu

Harding Bible professor uses Chinese martial art to teach students focus, peace and integrity.
Joshua Johnson
SEARCY, Ark. — The room is dimly lit and quiet. Half of the overhead lights are on, throwing flickering shadows against the back wall.

The teacher watches from a low stance, legs spread wide, arms crossed. Opposite him are two students, palms outstretched, eyes narrowed to slits.
“Remember to breathe,” the teacher says. The students exhale, audibly, as one, and then straighten, allowing their arms to float up, hands becoming fists, heads tilting back. They raise their right knees in a concurrent motion. The pose is bird-like.

“Now we turn, make a crane beak, and then out,” the teacher says.

“This is making my hip sore,” one of the students says between breaths.

The teacher, Kevin Youngblood, shares the Gospel with his students by day as an associate professor of Bible and ministry for Harding University, a nearly 6,000-student school associated with Churches of Christ.

By late afternoon, he teaches kung fu — a Chinese martial art that emphasizes patience and energy — at Impact 360, a Searcy nonprofit that offers training in martial arts, tutoring and mentoring for the community.

Youngblood was nine when he was introduced to kung fu. Growing up in Tampa, Fla., he lacked the athleticism of his peers in fourth grade, so his father — concerned for his son’s wellbeing and safety — enrolled him in a judo class at a community center.

It wasn’t his forte. At age ten, he moved to a slightly smaller room across the hall, where a man named Mr. Geary taught kung fu. Unlike judo, which focuses on holds and throws, kung fu offered a broad spectrum of self-defense, Youngblood said. 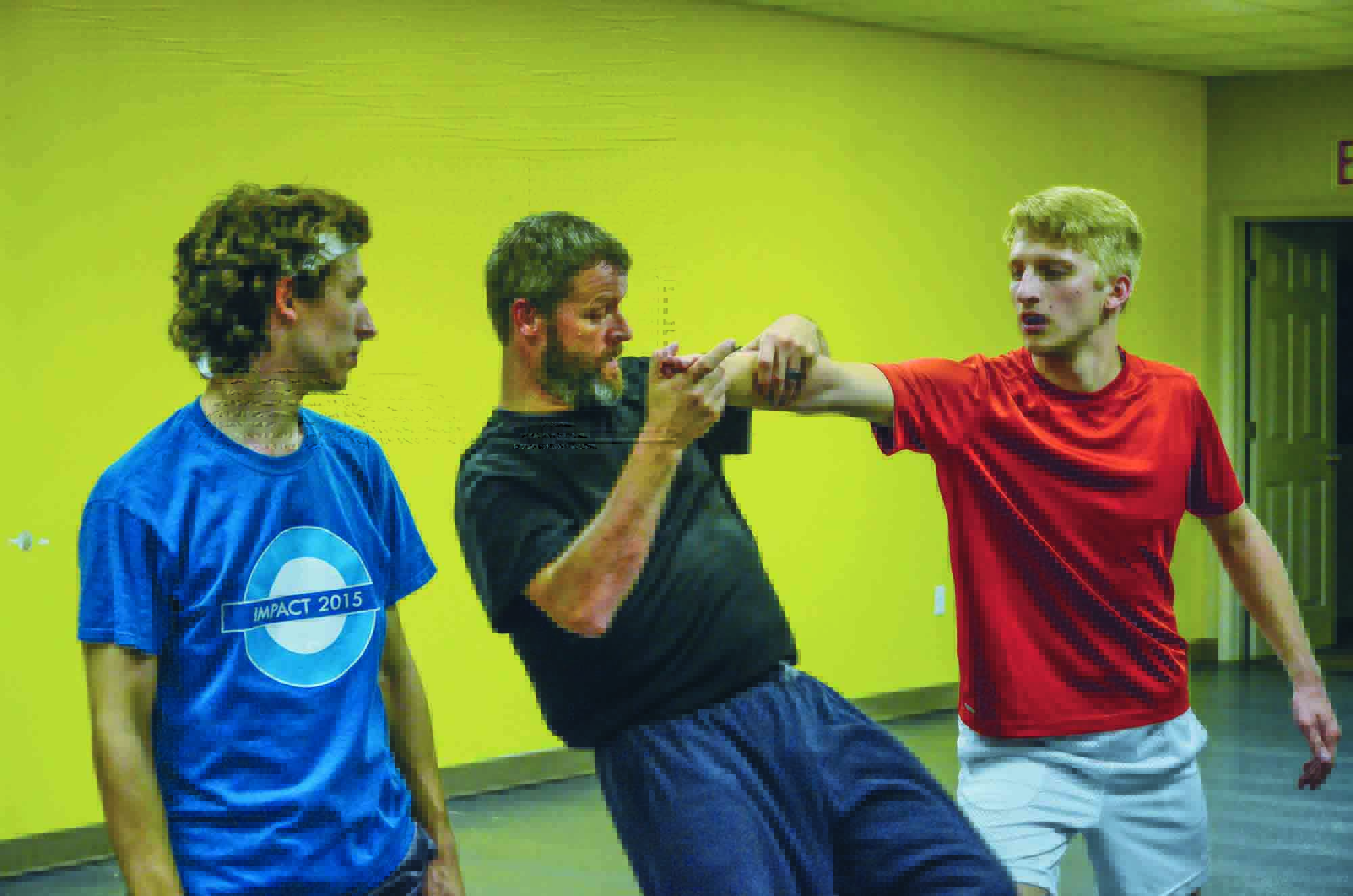 Kevin Youngblood helps Matt Wilcox with proper kung fu technique. One of the students, Matt Wilcox, turns sharply and scoops his hand close to the ground, then plants and kicks from the hip. His tennis shoes squeak on the linoleum floor. The second student, Graeme Gastineau, does likewise a few seconds later.

It is a gong li quan form, or “power fist,” involving a sequence of strong attacks primarily from the upper body.

“Is the fist in the chamber at this point?” Wilcox asks. His teacher nods and moves a bit closer, deftly demonstrating the transitional hand placements from a mabu stance to gumbo. Gastineau, meanwhile, turns and attacks with an outward-facing palm strike — accidentally striking the teacher above the elbow.

‘I guess this has always been my nature, but when I get into something like this, I really study it,” Youngblood said. “So I read. I read everything I could get my hands on — the origins of kung fu, the different styles of kung fu. I was trying to figure out exactly what I was being taught. But it was just never clear to me. It looked like what I was learning … was not a pure, traditional style of kung fu.”

He later enrolled at the Wah Lum Kung Fu Temple in Orlando, Fla. He became a student of Pui Chan — the kung fu grandmaster who started the Wah Lum program. Chan has been featured on the Discovery Channel and in martial arts magazines.

“He was the real deal,” Youngblood said.

Youngblood continued practicing kung fu while he attended Lipscomb University in Nashville, Tenn., from 1987 to 1991. He earned bachelor’s and graduate degrees in Old Testament theology and doctrinal interpretation. He married his wife, Becky, in 1994 and had his first child, Karissa, in 1996. He earned a doctorate from Southern Baptist Theological Seminary in 2004.

While kung fu has roots in Eastern faith, many Americans regard it as an athletic pastime, Youngblood said. But it has a mental component that students can witness — and experience — as spiritual in nature.

Some Christians may see this as a conflict of interests, but Youngblood seeks to ground his instruction of kung fu in ways that complement the teachings of Jesus, with emphasis on biblical virtues such as focus, peace and integrity.

“To participate in anything cultural … we have to be thoughtful and critical about how we do it, so that we do it in a way that is true to our Christian convictions,” Youngblood said. “And I approach kung fu the same way I approach going to the movies. I am very selective about what I see, for my own sake and for the sake of my children. But, I don’t feel like I should avoid the movie theater altogether simply because they show some bad movies.”

When Youngblood teaches students at Harding, he places a strong emphasis on mental discipline — similar to the meditative state that permeates much of Chinese and Japanese culture.

One fundamental difference between Western and Eastern medicine, Youngblood said, is that one’s mental state and one’s physical state are intimately interconnected.

“I think the Bible teaches this,” Youngblood said. “Think of the psalmist who said that when he did not confess his sins, his body wasted away.” (Psalm 32:3)

Youngblood’s students, Gastineau and Wilcox, are both Bible and ministry majors at Harding. Wilcox said he knew little to nothing about kung fu before enrolling in Youngblood’s lessons. Gastineau’s father went to Lipscomb University with Youngblood, and the two men studied kung fu together.

“I guess I wanted to live through the legacy,” Gastineau said with a laugh.

Both students, sweaty and breathless, relax into an upright stance, hands slowly falling to their sides.

Gastineau wipes the sweat from his forehead. “Tough one today,” he says, forcing himself to take deep breaths.

“We practice these forms and learn these moves so that, when danger arises, it is second nature to do what we’ve been doing,” Gastineau said. “It should be the same with our Christian walk.”

Youngblood said that, ultimately, kung fu was founded and practiced as a tool to maintain health, in the service of rigorous meditation.

“By balancing physical and spiritual health and by recognizing the connection between the two, you will attain health benefits, and you will discover a sense of control over your own body and mind,” Youngblood said.

“After that, it is up to you to decide what to do with that. Whether that enhanced control is used for Buddhist virtues or Christian virtues, or to hurt someone, or to plow a field — that is up to you.”