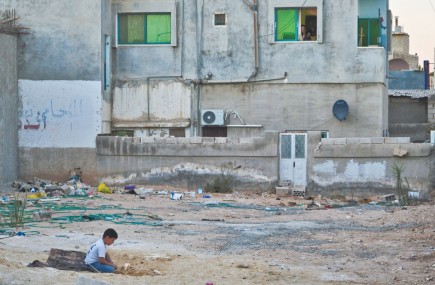 The road from Damascus

Erik Tryggestad
CHRISTIANS AID REFUGEES of Syria’s civil war and hear their harrowing stories of survival.
For Christians in America, it’s time to engage in the Syrian conflict, says Danny Sims.
The bloody civil war in the Middle Eastern nation — whose capital, Damascus, was the site of the apostle Paul’s baptism — has claimed more than 30,000 lives in the past 18 months, according to news reports.
Sims, executive director of Global Samaritan Resources, traveled to neighboring Jordan recently to listen to refugees from the war. “Hands-on love and peace” are needed desperately, he said.
So are blankets.

Sims visited the city of Mafraq, about 10 miles south of the Syrian border, on behalf of the Christian humanitarian nonprofit, which receives support from members of Churches of Christ. The longtime minister became executive director of the Abilene, Texas-based nonprofit in March.
Refugees have flooded Syria’s neighbors since the “Arab Spring” of 2011 when Syrians began demonstrations against President Bashar al-Assad. In Mafraq, a United Nations camp houses 33,000 refugees — nearly half under age 18.
Other Syrian families live in borrowed houses, Sims said. In the courtyard of one such home, he spoke with a refugee named Hussein, who lived in the city of Homs, the focal point of the conflict between the Syrian government and anti-government fighters.
In Homs, soldiers went from door to door, threatening or killing anyone believed to support their enemies, Hussein told the minister. As the family prepared to flee, Hussein’s 70-year-old father distracted the soldiers while they hid.
“When the family … came out of their hiding spot, they found their father dead,” Sims said. “The army had decapitated him.”
Now Hussein and the surviving members of his family huddle in a small house with rusted pipes and a leaky roof. For them, “it will be a long, cold winter,” Sims said.
The family’s needs extend far beyond the physical. As Hussein told the minister his story, the Syrian’s steely blue eyes held “no tears, but a hollow vacuum.”
“There was a look of desperation and hate,” Sims said. “Right now, there’s not a lot of forgiveness going on.”
CHRISTIANS ‘STAND IN THE BREACH’
Many outsiders view the Syrian conflict as one that pits Muslims against Muslims, Sims said. About three-fourths of the country’s 22.5 million people are Sunni Muslims. Just under 3 million Syrians are Alawite Muslims, a minority group that has controlled the country politically for 40 years. About 10 percent of the population claims Christianity as its faith.
About 6 percent of Jordan’s population is Christian. During his fact-finding trip to Mafraq, Sims worked alongside a Jordanian pastor and met volunteers from around the globe who work with ministries and nonprofits assisting the refugees.
The group included Coptic Christians from Egypt and evangelicals from New Zealand and Europe. Every day they met and prayed together.
Though their beliefs differ, the volunteers “are not spending much time arguing over their disagreements,” Sims said. “In a Muslim-dominated culture, the differences we have quickly fall aside in favor of what we have in common.”
In addition, he said, Christians in Jordan “have a genuine sense that they are standing in the breach between life and death, hope and despair.”
FAITH-BASED DIPLOMACY
While Sims lends his support to Syrian refugees, other church members are working with the people of the Middle East in pursuit of faith-based reconciliation for the country.
In May and July, representatives of religious and political groups within Syria met in Cairo to discuss a “Healing and Reconciliation Process” that will prevent civil war after the current conflict ends. Participants included Muslims, Christians and Druze (another minority faith group in Syria) as well as secular leaders and Bedouin tribal chiefs.
Two representatives of Pepperdine University also participated — Brian Cox and Timothy Pownall, directors of the PACIS Project in Faith-Based Diplomacy at the Malibu, Calif., university. Cox developed a model of conflict resolution based on Matthew 18:15, in which Jesus urges his followers to settle their disputes in a respectful, loving manner.
“It’s a unique process that is not interfaith dialogue, not traditional conflict resolution,” Cox told Christianity Today . “It focuses on softening hearts as the first step toward constructive, joint problem-solving.”
The goal of the meetings was to encourage Syrians to create a protocol “that will help them responsibly envision a national future together, post-Assad, under the sovereignty of God,” said Pownall, an elder of the Conejo Valley Church of Christ in Thousand Oaks, Calif. The participants are organizing future talks.
GIVING AID, PRAYING FOR PEACE
Meanwhile, Global Samaritan is collecting funds for blankets and other necessities for the Syrian refugees in Jordan. Rather than send containers of supplies, the nonprofit will use donations to buy relief items locally, helping the Jordanian economy, Sims said.
The nonprofit also seeks ways to provide the refugees with safe drinking water. During the trip, Sims said, “I saw a lot of sick children drinking impure water.” Global Samaritan wants to help, but “we’ve got to do it in a way that’s sustainable.”
Sims encouraged American Christians to seize the opportunity to help the people of Syria — by giving what they can and praying for peace.
“Peacemaking is more difficult than war-making,” he said. “But it costs less and pays much better dividends.”
MORE INFORMATION: globalsamaritan.org.