Audrey Jackson will serve as The Christian Chronicle's associate editor for print and digital.

She produced a one-page, handwritten “newspaper” about happenings in her family’s neighborhood.

“The world is full of untold stories, and I like to live my life between the written lines.”

A decade later, when Jackson enrolled at Harding University in Searcy, Ark., she majored in art.

The pull of storytelling — through words and images — was too strong. She changed her major to print journalism.

“The world is full of untold stories, and I like to live my life between the written lines,” says Audrey, 22.

I’m thrilled to introduce Audrey, who graduated from Harding in May, as The Christian Chronicle’s newest staff member. Starting Aug. 2, she’ll serve as associate editor for print and digital. 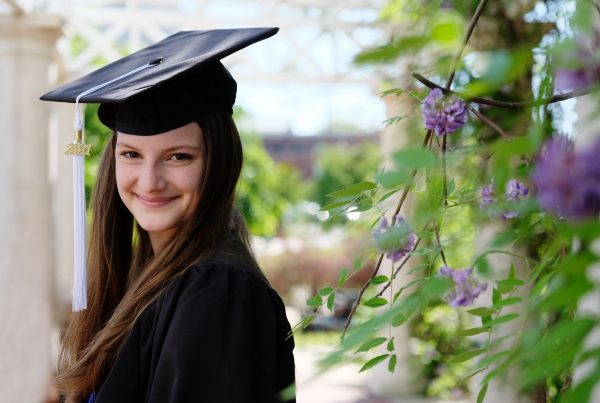 Audrey Jackson is a 2021 graduate of Harding University in Searcy, Ark.

Besides being a talented writer, Audrey — who was finishing first grade when I joined the Chronicle staff in 2005 — brings strong photography and newspaper design skills.

“Audrey is a very skilled, versatile journalist and photojournalist. She can tackle investigative assignments, and she is also gifted as a storyteller,” said April Fatula, Harding’s student publications adviser. “She has a natural curiosity about the world around her.”

“As a person, she is that friend that intentionally sets reminders to call someone she hasn’t talked to in a few weeks just to check on them,” Darnell said. “She is intentional with everything she does.”

The Arkansas native’s parents, Chris and Carol Jackson, are Harding alumni. The family owned an Ozark Mountains resort for many years. Audrey grew up working hard and interacting with a variety of people.

In her application, she cited a desire to work in a Christ-focused atmosphere.

“As a person, she is that friend that intentionally sets reminders to call someone she hasn’t talked to in a few weeks just to check on them.”

She has deep roots in Churches of Christ. Her late grandmother Macie Jackson was a beloved Oklahoma Christian University volunteer. Her uncle Keith Lape is a domestic missionary who serves the River City Church of Christ, a North Little Rock, Ark., congregation closely tied to a homeless ministry. She attended the Downtown and Cloverdale congregations while at Harding.

During a four-day tryout at our office on the Oklahoma Christian campus, Audrey interviewed all of us — when we weren’t interviewing her — and produced an insightful feature story on the Chronicle and its mission.

I liked that she quoted the Chronicle’s founding editor, the late Olan L. Hicks, in her story.

“Christian Chronicle is to be built on character,” Hicks wrote in 1943. “It means to stand for right and truth, for fairness and impartiality, for zeal according to knowledge. It is a newspaper and is to be conducted on the principles of news reporting. We mean to maintain not only the highest ethics of the newspaper profession, but also of Christianity.”

“Christian Chronicle is to be built on character. It means to stand for right and truth, for fairness and impartiality, for zeal according to knowledge.”

Chronicle President and CEO Erik Tryggestad has a clipping of that old column taped to his computer monitor. Audrey — a journalist with an attention to detail — noticed it.

I heard nothing but positive reports.

“I look forward to the youthful energy and skills she will bring to the Chronicle team,” Lynda said.

We prayed that God would lead us to the right person to join the Chronicle staff.

We believe Audrey is that person.