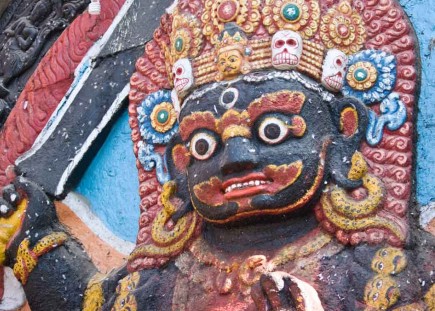 The (other) kingdom in Kathmandu

Erik Tryggestad
A MONARCHY NO MORE, the mountainous nation of Nepal wrestles with its future as a small Church of Christ struggles to serve.

KATHMANDU, Nepal – Krishna Gopal steps out in faith — every time he crosses the street.

On a Wednesday afternoon, the minister wades into a dusty road near his home in this Asian capital, choked with fast-moving mopeds, rickshaws and the occasional cow.

He passes a merchant selling tiny tomatoes from a basket on his bicycle. Across the street, at the multi-story Citycentre mall, movie posters boast the latest Bollywood imports from neighboring India — plus James Cameron’s “Avatar” in 3D.

Gopal, 63, dodges his way through the dizzying mix of antique and modern, fast and slow, and arrives at a red-brick hospital. A member of the congregation he shepherds, the Kamal Pokhari Church of Christ, is in the intensive care unit after a drug overdose. He talks with a nurse to make sure the patient is improving.

For 41 years, Gopal has preached, conducted Biblestudies at kitchen tables and sat at the bedsides of the sick in this nation of29.8 million souls, home to the world’s highest peak, Mount Everest. He and hiscoworkers have planted dozens of churches across Nepal — in Kathmandu and theremote villages in the Himalayas.

“My two passions are trekking and preaching,” he says.

An ethnic Newar — an indigenous people of the Kathmandu valley — he grewup like most of his people, worshiping the god Taleju.

Walking through the city’s historic Durbar Square, hepoints to a large pagoda with elaborate carvings of the multi-armed goddess. Heused to sleep in the temple as his parents participated in weeklong ceremoniesdedicated to Taleju, known as Durga in India.

Much has changed since the days when Nepal’s king livedin a grand palace near the pagoda.

Today the palace is a museum and the 239-year-oldmonarchy is history, swept away in 2008 after a decade-long insurrection byMaoist rebels. The Maoists, bearing the iconic hammer and sickle of the SovietUnion, are part of the country’s new government, which struggles to write a newconstitution.

Gopal’s life also has changed since the days when heslept in the temple near the royal palace. As a young man, he found a pamphletthat told him about a different, eternal kingdom.

“I was worshiping a dead god,” he realized after reading it. “I need aliving God.”

He searched for a Bible and found only one shop in Kathmandu that carriedthem. He swept the floors of the shop for a month to earn enough money to buy aNew Testament in his language.

“I read it and was really touched by the message,” he says.

He shared the message with any who would listen. Thatgot him in trouble with Nepali authorities, then opposed to public evangelismby “that cow-eating religion” from the West.

He spent three years in a jail near the pagoda where he once worshipedTaleju. In 1971 he was released, undeterred. Soon he met missionaries fromChurches of Christ and was baptized.

It’s not that Nepalis are opposed to Christianity, says one of Gopal’s relatives, who asked that her name be withheld

“On Dec. 25, all the malls of Kathmandu are lined withChristmas trees,” she says. But during a Hindu holy month, celebrated withanimal sacrifices, “the streets are awash in blood.”

Outsiders mistakenly think of Nepalis as Hindu or Buddhist, she says.Most are both — incorporating elements of the two faiths — and have no problemincluding Christian principles into their pantheon of belief.

“Really living like a Christian — that’s a problem,” she says.

Believers don’t participate in the rituals or eat meat sacrificed toidols. They must exclude themselves from their people’s culture — often asource of friction in Nepal’s tight-knit families.

When Gopal and his wife, Kamala, became Christians, his father-in-lawrefused to eat in the same room with them. The couple had become “untouchable,”the minister says.

Patiently, Gopal tried to raise his family withChristian beliefs. Eventually, his example bore fruit, and his father-in-lawwas baptized. He took the statues of his former gods and cast them into theriver near his home.

To his father-in-law’s relief, nothing happened. Soonthe whole family was baptized, including Ichabod Shrestha, Gopal’sbrother-in-law.

Shrestha now works with a small Church of Christ in Chakhu, a villagenear Nepal’s border with the Tibet region of China. When asked why he wentagainst his culture and became a Christian 26 years ago, he answers quickly.

“Because I wanted to save my spirit,” he says.

FROM MAO TO CHRIST

Below the family’s living room, the Kamal Pokhari Church of Christgathers for Wednesday night Bible study.

The Christians pour over       2 Timothy 2, in which the apostle Paulurges his apprentice to “join with me in suffering, like a good soldier ofChrist Jesus.”

The 25 souls in the small room, like Gopal and his family, have sufferedfor their faith.

Suraj Bahadur Basnet, who leads the Bible study, grew upin a Hindu family. He knew that leaving the faith would alienate him from hisparents, but as he studied Scripture, “slowly, slowly I accepted that there isa Savior, there is a God,” he says. Now he spends weekends and vacations fromhis job to preach in Nepal’s rural villages.

When she’s not studying the Bible, Bimala Shrestha Ghimire goes fromhouse to house, checking on people who have visited the church and invitingthem back. Her husband is not a Christian but accepts her beliefs.

“The brothers and sisters here, their love makes me stronger,” she says.

Kamal Panta was a Maoist before he met Gopal and studied the Bible.

“I learned the truth and the real life in Christianityand a real God,” says Panta, a taxi driver. Now he and his wife, Sabitri, aremembers of the church.

Their son, Bimal, grew up in the congregation.

“I have spent so much time here since my childhood,” the21-year-old says after leading the closing prayer after the Bible lesson.“Society here is so different from the people I am friends with. Most of myfriends are worldly people. They say, ‘You are my best friend, but don’t try topreach to me.’”

Despite the temptations, young Christians say they remainloyal to the eternal kingdom for which their parents sacrificed.

“Going to another religion is not an option,” says Gopal’s relative. “There is onlyone truth.”