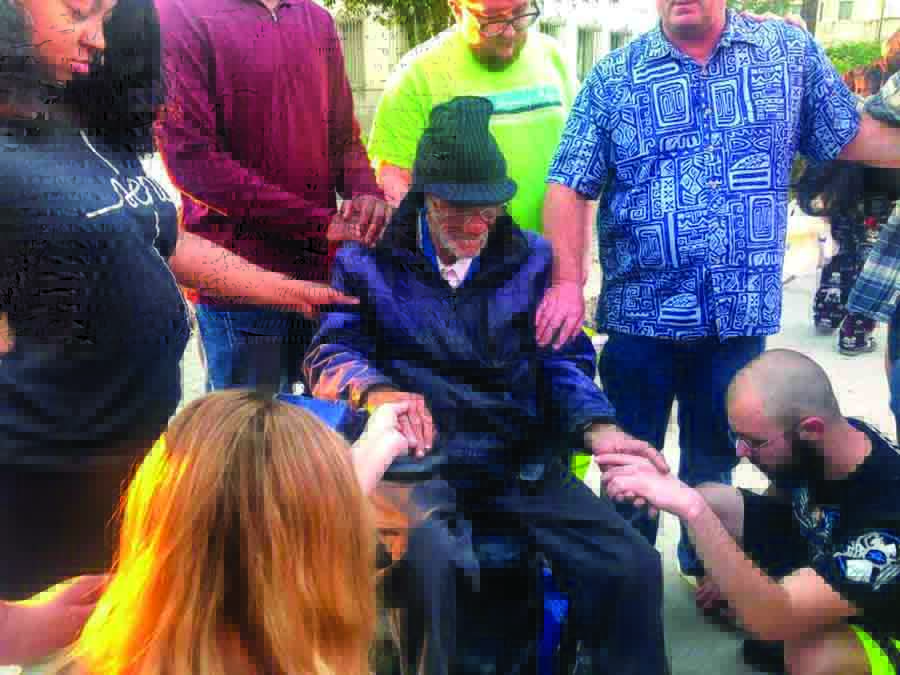 The mission at home

After a dozen years as missionaries in Mexico, a Christian couple ministers in a place too often neglected by Churches of Christ — the inner city of their hometown.

PHOENIX — When Sean and Jeni McClue packed up their lives in Mexico and moved back to their native Arizona to launch an inner-city ministry, they figured they’d be working with immigrants.

They weren’t expecting immigrants from the Congo.

“It’s a bizarre outreach, but it works.”

The McClues, who labored for 12 years as church planters in Cuernavaca and Mexico City, designed Central Phoenix Urban Ministry to make use of their Spanish-language skills as they reached out to their city’s growing Hispanic population. The Northwest Church of Christ in the Phoenix suburb of Glendale sponsors the work.

Since 2011, the McClues have served a host of Latino families from their base of operations in the downtown neighborhood of Garfield. They teach English to their Spanish-speaking neighbors, help them with yard work and share Jesus. 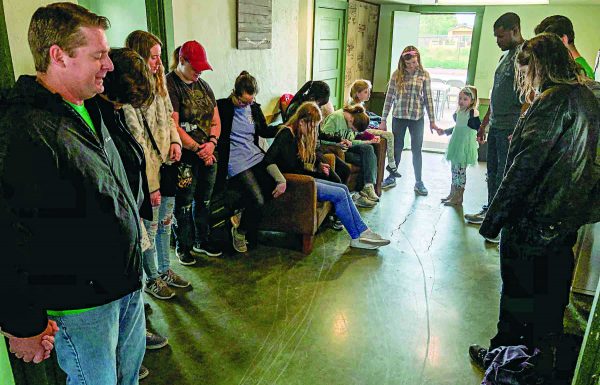 At the Greenhouse, home of Central Phoenix Urban Ministry, Sean McClue, left, leads a prayer for a group of university students during a campus ministry service retreat.

They’ve also encountered a community of about 100 families from the Democratic Republic of Congo, Africa’s second-largest country, mired in conflict and instability for decades.

When the refugees moved into central Phoenix, few of them spoke much English — and certainly no Spanish.

The McClues have taught language lessons for their Congolese neighbors and have sponsored “backpack drives,” encouraging fellow Christians to buy school supplies for more than 400 of the refugees’ kids.

More importantly, the missionaries have become their friends, said Barnabas Mchingwa Mto, a patriarch in the Congolese community.

“Many times Sean McClue has taken my daughters and daughters-in-law and their children to play in the park,” Mto told The Christian Chronicle, referring to a youth program sponsored by the urban ministry. In addition, Sean McClue “has visited with many refugees’ families,” Mto said.

Building bridges across languages and ethnicities is only part of the McClues’ work. In the past eight years they’ve introduced dozens of university students and interns to their community, modeling a relationship-based approach to ministry in America’s burgeoning urban locales — which they believe are too often ignored by Churches of Christ.

“Our vision,” Jeni McClue says, “is to encourage missions in the city.”

‘HERE, WE’RE NOT THE DIFFERENT ONES’

For Sean McClue, urban ministry is close to home. 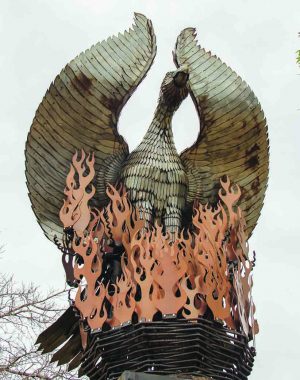 Phoenix’s Garfield neighborhood is a mix of low-income housing and trendy urban redevelopment. The neighborhood also serves as a canvas for local artists.

“I was actually born in that hospital right there,” he says, pointing to a building blocks away, as he sits in the backyard of the Greenhouse. The one-story bungalow, painted forest green, serves as a ministry center and meeting place for a small church. The home was built in 1912, the same year Arizona became the 48th state.

For decades, Garfield was the hub of the community and was home to the state’s largest Church of Christ, Sean McClue says. That congregation held out against a rash of gang violence here in the 1980s but moved north in the mid-1990s.

Van Buren Street, just a few blocks from the Greenhouse, once served as a divider between the city’s white and black communities. Sean McClue remembers being told to stay out of this part of town — where he and his family now live.

One hundred and seven years after statehood, Arizona’s capital is the sixth-largest city in the U.S., boasting a metro population of 4.7 million. That still seems small compared to the McClues’ former residence — Mexico City, which has a metro population in excess of 21 million. 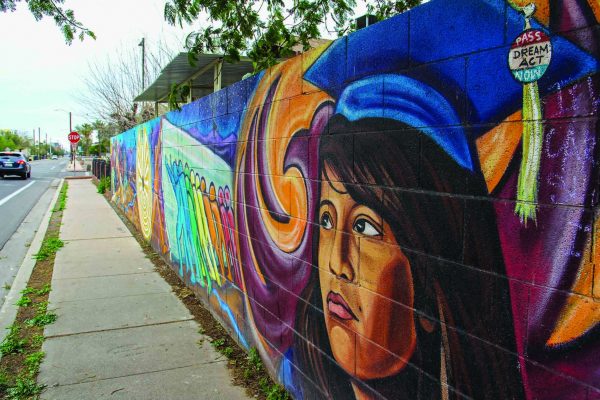 Walls in the Garfield neighborhood feature murals depicting the struggles facing Latinos living in the U.S.

Baptized during his college years at the University of Arizona, Sean McClue met his future bride while working in campus ministry. He graduated with a degree in business marketing before enrolling in Adventures in Missions, or AIM, a program of Sunset International Bible Institute in Lubbock, Texas. As he studied in the program, Jeni completed degrees in chemistry and biochemistry. They married after graduation and moved to Lubbock to study in Sunset’s missions program and serve on the AIM staff.

“If we can make disciples of Jesus in the international neighborhoods in our own city, then maybe one day they can help us reach neighborhoods all over the world.”

They joined a mission team in Cuernavaca, where they perfected their Spanish. They later moved to Mexico City as part of a five-family team of former AIM students. There, they helped plant churches that met across the massive city in small, intimate cell groups. They raised two of their three children in Mexico.

After a dozen years south of the border, returning to Arizona required adjustment.

“Here, we’re not really the different ones,” Jeni McClue says. About 44 percent of the metro population is of Hispanic origin, according to census data.

Also, “I don’t think people are as trusting here as they were in Mexico,” she says.

Phoenix is the birthplace of SB 1070, a state senate bill that, when passed in 2010, was one of the broadest and strictest anti-illegal immigration measures in the nation. Proponents saw it as a means of curbing illegal immigration and drug-related violence and kidnappings. Critics argue that the law encourages racial profiling.

The McClues do their best to stay out of politics, sharing the gospel with their neighbors regardless of their immigration status. They use FriendSpeak, a program developed by Texas-based Let’s Start Talking that helps non-native speakers improve their English using the Bible. 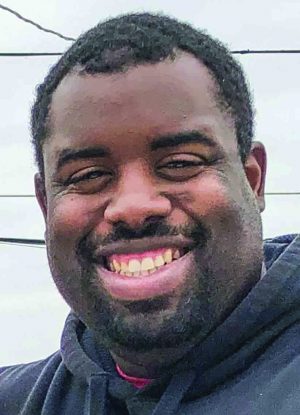 Interns with AIM assist the ministry, and a few have returned after their time in the program to continue helping.

One is Dominyc Turner, a native of Long Beach, Calif., who worked in Houston for 10 years before Hurricane Harvey in 2017 forced him to relocate (something he had planned to do anyway, he says).

Turner, who taught himself Spanish, works for a restaurant in the Phoenix airport and serves with Central Phoenix Urban Ministry.

When it comes to reaching Latinos, “just be calm and let them come as they are,” he advises. Trust takes time. “They expect to owe you something. Giving them something freely is an unknown thing outside of the church.”

Inside the Greenhouse, university students line up to make street tacos al pastor. Twenty-two students, plus some family and campus ministry staff, are here participating in a ministry retreat, a combination of devotionals and service projects.

The students, from the University of Arizona in Tucson and Arizona State in Tempe, spent the morning serving families in the Garfield neighborhood. Several of the students did yard work for “Miss Lupita,” a widow who lives a few blocks from the Greenhouse.

“Seeing everyone working together, no one trying to be the boss” — that’s what Joe Cooper likes best about the experience. The plumber and member of the Mission Valley Church of Christ accompanied one of the college groups to the event.

As for Miss Lupita, “to see happy people are loving her, helping her out, that’s cool,” Cooper says.

After tacos, the retreaters move to a nearby park to host the ministry’s weekly JAM (Jesus And Me) Club for about 30 Latino youths from the community. The college students lead “Father Abraham” and other Vacation Bible School songs and present a skit they wrote about the life of King David.

The students are from diverse locales — from Arizona to New Mexico to Delaware. There are even students from the African nations of Ghana and Zimbabwe. 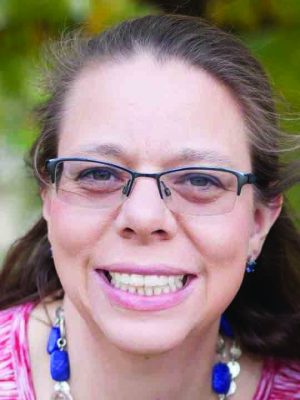 Allen Matsika, an MBA student at Arizona State, came with a group from the Oasis Campus Ministry in Tempe. Matsika, who grew up in the Rusape Road Church of Christ in his home country, says that most of the youth activities there are centered on the church building itself. He says he appreciates Central Phoenix Urban Ministry’s focus on meeting people where they live.

Some of the retreat participants aren’t from Churches of Christ — and likely wouldn’t be interested in a weekend of singing and sermons, says Jessica Knapp, a campus minister for Ambassadors 4 Christ, a ministry supported by Churches of Christ in Tucson. But students have an abiding love of service, she says.

“It’s a bizarre outreach, but it works,” she says of the retreat, adding that a participant once told her, “I guess you’re not too bad — for a church group.”

For the McClues, modeling inner-city ministry meant moving their family into the inner city. They live a few blocks away from the Greenhouse, and Jeni McClue is an administrator in the public school system. It’s quiet here at night, they say, after the commuters return home from their jobs in downtown Phoenix.

“While planting churches in Mexico City, we learned quickly that the only way to impact such a large city was to focus on individual neighborhoods.”

The neighborhood is changing rapidly. Arizona State has a growing downtown campus nearby, accompanied by private parking lots and Starbucks coffee. The Garfield community is becoming a hub for local artists, with modern murals of Hispanic life lining the streets. House-flipping developers have taken interest in the gentrified, low-income homes, envisioning a new, trendy downtown community that caters to hipster millennials.

But for now the immigrant families are here — including the recent arrivals from Congo, some of whom are children born in refugee camps in Africa.

“Now, because of continued unrest in their home country … they are trying rebuild their lives here,” Sean McClue says. One is studying in community college to become a obstetrician.

But the refugees face challenges, he adds, noting that one child had to repeat two years of high school due to a lack of English proficiency.

So the McClues — missionaries who returned home — help those who cannot go home, giving them lessons in English and sharing their love of Christ. 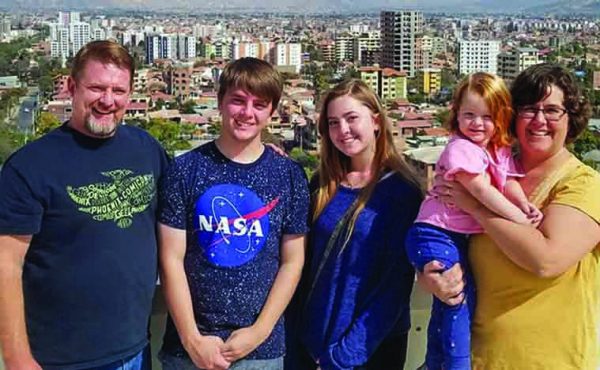 The McClues (Sean, Philip, Sarah, Esther and Jeni) visit Cochabamba, Bolivia, in 2018. Son Philip is a student at Arizona State University’s Polytechnic Campus in Mesa, Ariz. Daughter Sarah just returned to the U.S. after nearly two years of mission work in Cochabamba through Adventures in Missions. She begins studies at the University of Arizona this fall. Esther is 3 years old.

Central Phoenix Urban Ministry also has hosted two backpack drives for the refugee children and other youths in the neighborhood. Area churches provided supplies for 500 backpacks.

Barnabas Mto, the Congolese community leader, envisions a bigger role for Churches of Christ. He’s seen what one ministry can do locally, but thousands of his countrymen remain in refugee camps in Africa.

“If the Churches of Christ could do a big ministry, we could reach 135,000 students in Africa in the refugee camps,” he says. “My community appreciates the help,” he says, “and we ask you to continue.”

That task seems huge, Sean McClue says, but it starts on a small scale.

“If we can make disciples of Jesus in the international neighborhoods in our own city, then maybe one day they can help us reach neighborhoods all over the world,” he says.

“While planting churches in Mexico City, we learned quickly that the only way to impact such a large city was to focus on individual neighborhoods.

“And coming back to Phoenix, we feel the same way.”