As Shannon Wilburn sat next to her critically ill husband’s bed, she didn’t think too much when one of his many alarms started beeping. The sound had become common.

Mitch Wilburn, 52, minister for The Park Church of Christ in Tulsa, Okla., had been in the hospital for 29 days. He was sedated and on a ventilator for the second time as he battled COVID-19. 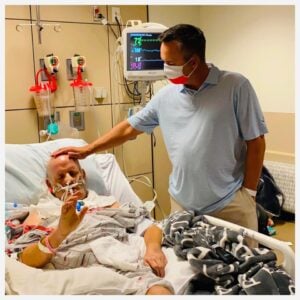 Chris Seidman, lead minister for The Branch Church in Farmers Branch, Texas, prays with Mitch Wilburn, his brother-in-law, during the Oklahoma preacher’s time in the hospital.

But as Shannon and a nearby nurse looked up to check the alarm, his wife’s heart sank.

The next few minutes were a blur. The nurse started calling his name and hitting his chest. She then pushed the code blue button on the wall.

Shannon left the room as medical professionals raced in. She waited anxiously in the hall with the chaplain and a pharmacist, who happens to be a member of their church.

Within minutes, Mitch was back.

“They didn’t have to do any intervention,” she said. “He came back on his own.”

It’s still tough for Shannon to look back on those moments, even though she knows the outcome. 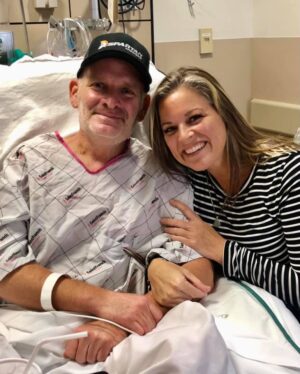 In fact, Mitch is now home.

But it took 48 days from when he was first admitted — nearly seven weeks that are a blur to him.

“It’s like putting a puzzle together,” Mitch said. “You have to meet with loved ones after to put the pieces together.”

Now knowing some of what happened, he considers the lack of memory a blessing.

“It’s sobering,” he said. “It’s not fear that enters, because I know I made it through it, but someone had to tell me I flatlined. That’s just a sobering prospect of the brevity of life.”

That brush with death came just days after The Christian Chronicle first spoke with Shannon.

During that first interview, she had gotten the call that Mitch was extubated, taken off of the ventilator for the first time.

Then two days later, Mitch was moved out of the COVID-19 unit and onto a floor where he could have visitors.

At that point, they had not seen each other in 26 days.

“He looked sick … and he was just skinny,” Shannon said. “I cried all over his chest for just getting to see him. It was just overwhelming.”

Monday, November 9, 3:00pm – Day 26 in the hospitalJournal entry by Shannon Wilburn Hey friends,The Lord is so…

Mitch had come so far, but within days his condition took a dramatic turn. He was put back on a ventilator. What Shannon didn’t know at the time was his body was going into septic shock. It was just hours later when that alarm went off, and Mitch flatlined.

He was fully sedated. Doctors put an external pacemaker on him, hoping to prevent another scare.

“Not everyone has this same happy ending. We’re so grateful and humbled that he got to live another day.”

They then determined that one of his autoimmune disorders, myasthenia gravis, was flaring. So, they began treating that with an IV medication. Shannon believes that was a major turning point.

His breathing began to improve. One by one, the many doctors assigned to his case began signing off. The pacemaker was removed. He was again extubated and fully awake.

“When they took the IV pole that at one point had like nine different things on it out of our room, I said, ‘Thank you, Jesus,’ Shannon said. “It just felt so much better.”

From there he was moved to the hospital’s rehabilitation wing. Six days later, he headed home.

“Not everyone has this same happy ending,” Shannon said. “We’re so grateful and humbled that he got to live another day.” 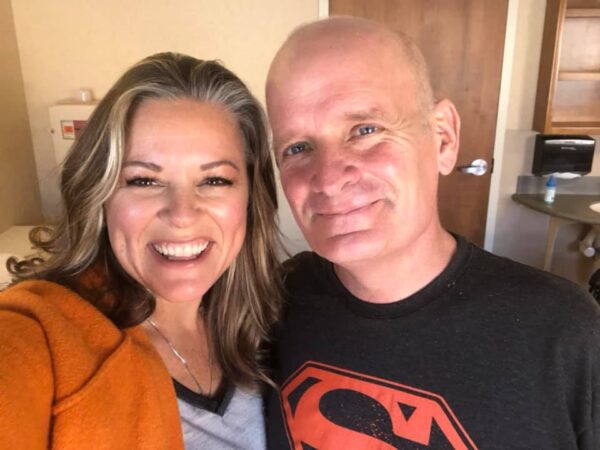 The Wilburns smile for a picture after finding out Mitch could go home.

The Wilburns are especially grateful for the doctors, nurses and other hospital employees who are working long hours during this pandemic.

“They work so hard,” Shannon said. “There is no way they have time to sit down.”

“This man, who was so sick, was wanting to pray for ME. … What a selfless act, an act that God would do as well.”

Mitch does recall one tech who, in his first few days in the hospital, showed him true compassion at 3 in the morning. At the time, Mitch was unable to move due to the tubes keeping him alive.

“He would say, ‘Can I do anything for you?’ The second night I asked if he would wipe my head with a cold rag, and he did,” Mitch said. “He didn’t have to do that.”

Other nurses and techs, he said, would hold his hands. Gestures that meant so much when he was in isolation.

After his release, a nurse who helped Mitch in the early days shared how he had encouraged her on a day when one of her other patients was near death. 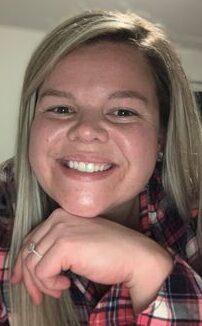 “I felt defeated, scared, unsure of how to care for Mitch’s neighbor,” the nurse, Maddison Walker, said on social media. “I had popped into (Mitch’s) room to check on him … Mitch asked me what he could pray for, for me. I stopped, in awe, not knowing what to say.”

She ended up asking him to pray for her and her coworkers, as they are all anxious about the future.

“When I left his room, I literally wanted to break down right there and cry,” Walker said. “This man, who was so sick, was wanting to pray for ME. … What a selfless act, an act that God would do as well.”

Mitch still has a ways to go before he will be back in the pulpit, preaching. His doctors say he needs to stay away from others for several more weeks to give his body time to heal and regain strength.

However, Mitch trusts God to keep healing and guiding him forward. 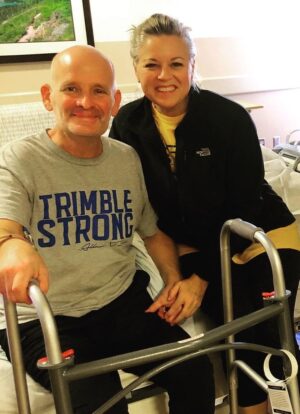 Mitch Wilburn, with his wife Shannon, spent six days in a rehabilitation hospital before getting to go home.

“In the book of Hebrews, it says Christ was perfected through suffering,” Mitch said. “If we’re fixing our eyes on a suffering Savior, what part of our walk in Christ do we believe is not going to join him in that suffering?”

Processing the memories of the last several weeks will take time for Shannon. The experience has been traumatic, but she, too, trusts God.

“I’ve had nightmares every night since we’ve been home, just medical stuff,” she said. “It’s traumatic to go through, but I know the Lord can redeem that, too.”

The one thing she knows for sure is “the Lord is definitely not done with Mitch.” 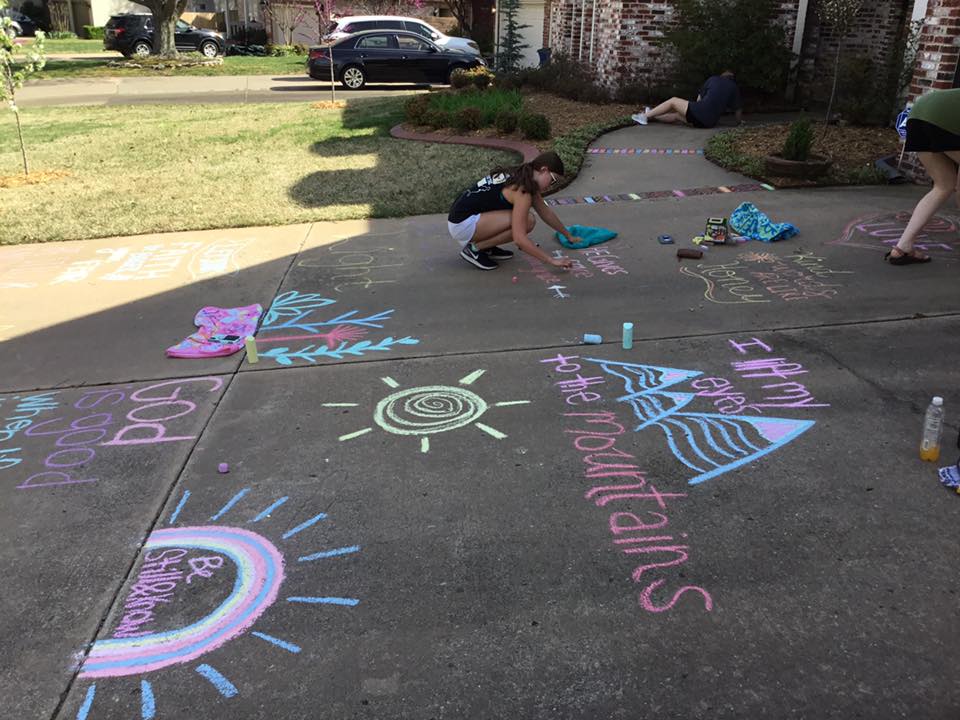 It was the worst, Tim Pyles said, he has ever… 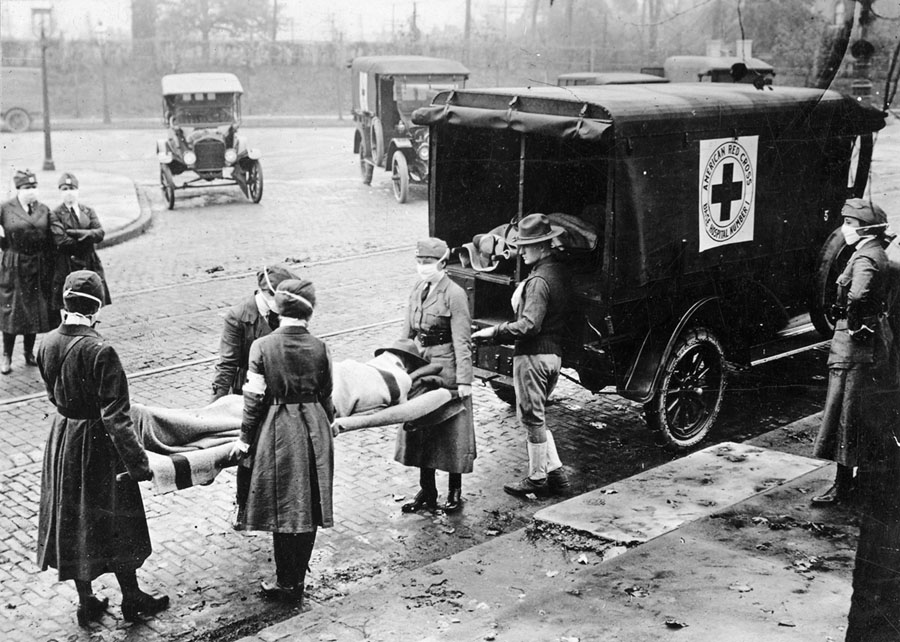 For lessons on closed churches, look at 1918 flu pandemic

I thought I knew a little about my family’s history.…