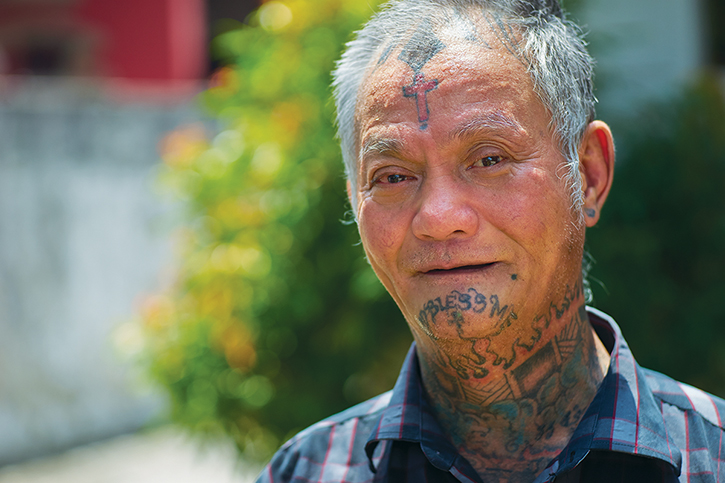 The faith of ‘Tattoo Tan’

Erik Tryggestad
President and CEO
SINGAPORE — His face preaches.
So do his arms, chest and legs. They tell a sermon about pain and loss, sin, a misspent youth, imprisonment and blessed redemption.
His name is Vincent Tan Tiong Leng, but to his fellow Christians he’s just “Tattoo Tan.”
My camera lens found him as I circled the auditorium of the Moulmein Church of Christ. Here in Singapore — a country so fastidious that it once banned the sale of chewing gum to keep vandals from sticking it on train doors — was a guy covered head to toe in spider webs, flames and lotus flowers. At church.
I didn’t have to look for him after worship. He found me. No one, it seems, gets out of the building without a “God bless you” from Tan — and possibly a hug. He asked me for a photo, so I whipped out my phone and “selfied.” (That’s me on the left.) 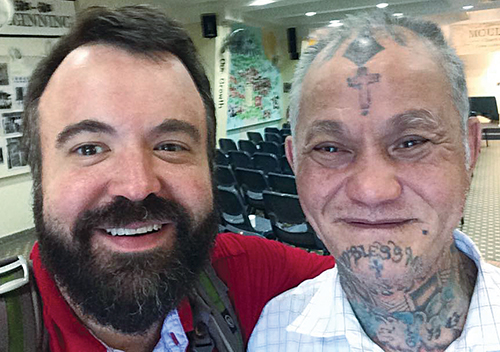 A “selfie” with Vincent Tan (PHOTO BY ERIK TRYGGESTAD)

He told me a smattering of his backstory. Later, two of the church’s members, Jee Kim and Chan Kim Kai, interviewed him and sent me the rest.
Tan’s grandfather was adopted by a rich merchant, but the Japanese wiped out the family’s fortune when they occupied Singapore during World War II. His dad was in a gang before he got married, and lived his life in bitterness. Tan dropped out of school after third grade and, like his father, started running with street thugs.
By 1974, he had embellished himself with more than 100 tattoos. That same year, he did the first of 12 stints in prison for fighting and gang activity.
He probably chewed gum, too. 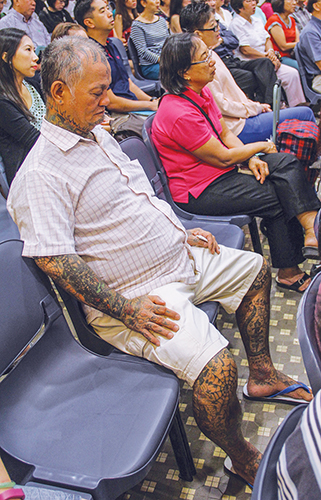 Vincent Tan worships with the Moulmein Church of Christ during the congregation’s farewell service in Singapore. (PHOTO BY ERIK TRYGGESTAD)
One of his crimes earned him three “strokes” from the authorities. (Caning, that is. Remember Michael Fay?) He also learned how to game the system, feigning illness so he could spend time in a hospital instead of a prison cell.
In 1989, during one of his “furloughs,” he wandered into the church building — a six-minute walk from the hospital. He met missionaries Gordon and Jane Hogan and started coming to church.

Dave Hogan, the missionaries’ son, now a minister for the church, said his first memory of Tan “was quite vivid.”

“I noticed ladies — mothers — grabbing kids and running for cover,” he joked. He and his wife, Debbie, “tried to compensate for the fear factor by greeting him as best as we could. We let him hold our tiny, 6-month-old daughter, Breda.
“I never imagined I’d baptize him after numerous incarcerations — 22 years later!”

For years, Tan still had troubles with the law, but he kept coming to church. And he started to change.

On Christmas Day, 2011, at age 53, he was baptized. Since then, he has stayed out of trouble.
Not too long ago, he bumped into some old cellmates. He said he couldn’t be a part of their gang anymore since he was a Christian.
“You, tattoo maniac? A Christian?” they laughed. He replied, “If you don’t believe me, come with me to church. You will see how much the brothers and sisters there love me. Do come!”
He rarely misses a Sunday, and often is “the first one to greet you with a big smile as you walk into the doors of Moulmein,” said Katherine Gould, an American who worshiped with the church when she lived in Southeast Asia. “He loves to tell you about how God has redeemed and changed his life … before he proudly shows off his Moulmein tattoo.”

• Road Notes: A Lord’s army — but no snowmen — in Southeast Asia

Filed under: From The East Headlines - Secondary International News