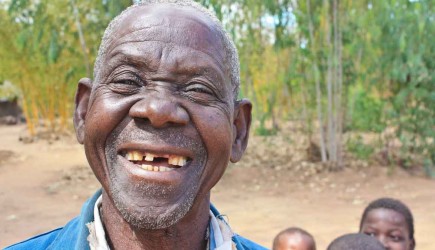 The face of Malawi: In a small African nation, Churches of Christ thrive

Erik Tryggestad
JALI, Malawi — Damison Nsapato can’t stop smiling.
On a Saturday morning, he rushes from his home to greet unexpected visitors from nearby Namikango Mission — a ministry training facility and maternity clinic in this slender, landlocked African nation.
Speaking in Chichewa, Nsapato talks about his 32 years as preacher for the D-Malikebu Church of Christ, a congregation of 170 souls, shepherded by four elders. When asked his age, he replies with a laugh.
He’s 88.
His congregation is one of the estimated 4,000 Churches of Christ in Malawi — thought to have the highest number of church members per capita in the world. In 2000, church researchers Mark Berryman and Wendell Broom estimated that one out of every 50 Malawians was a member of a Church of Christ.
“Malawi is the Israel of Africa,” said Priestly Nkhonjera, a longtime minister in Malawi. Gospel seed fell on fertile soil here more than a century ago, he said.
Congregations developed strong roots throughout the narrow country’s three regions — Northern, Central and Southern. Here, unlike many African nations, gray hair is common in Churches of Christ, as are second- and third-generation members.
In the Central Region, it’s hard to go more than 10 miles in any direction without finding a congregation, said Evance Mwapasa, an elder of the Area 47 Church of Christ in Malawi’s capital, Lilongwe.
Mwapasa grew up in a Church of Christ in Zomba — Malawi’s first capital when the country gained independence from Britain in 1964. Mwapasa’s father also served as an elder.
“I have never tasted any other church,” Mwapasa said.
NEW SOULS IN NYASALAND
Churches of Christ came here through a native Malawian.
Elaton Kundago traveled to South Africa for work and was baptized there in 1906. He returned to Malawi, then called Nyasaland, and began to preach.
Eventually, Kundago fell away from his new faith, but three men he converted in Zomba — George Masangano, Frederick Khonde and Ronald Kaundo — carried on his work.
In 1915, Baptist missionary John Chilembwe led an armed revolt against British rule in Nyasaland, and the government banned several religious groups, including Churches of Christ.
Church members were forced to baptize at night. Masagano, Khonde and Kaundo were jailed for seven years but led church work from prison.
In 1957, Andrew Connally, Doyle Gilliam and James Judd arrived in the Northern Region and built Lubagha Mission in the village of Rumphi.
Judd’s son, Randy, celebrated his 10th birthday in Rome, en route to Malawi. He remembers the family’s old mimeograph machine, churning out gospel tracts.
“We would get letters saying, ‘My brother picked this up and was laughing at it, and handed it to me. But I want to do what it says,’” Randy Judd said.
A lot of Malawians did what the tracts said. The Judds helped launch a Bible college in Mzuzu and traveled the region, teaching, preaching and planting. Hundreds of churches sprang to life.
To the south, U.S. Christians settled in the Zomba area and established Namikango Mission. Mark Thiesen, a second-generation missionary, now serves as director of the mission.
From humble beginnings, Churches of Christ have prospered. The president of the country himself, Bingu wa Mutharika, attended a worship service in the city of Zomba in 2006, recognizing the centennial of Churches of Christ in his nation.
Thiesen called the celebration “a watershed event” that reminded the church of its purpose and energized it to continue serving the Lord.
LABOR FOR LOVE — NOT MONEY
Today there are at least 12 Churches of Christ in the city of Zomba — and many second- and third-generation church members.
Laitoni Misomali grew up in the church and now serves as one of three ministers for the Zomba Central Church of Christ. The church has eight elders, 10 deacons and more than 300 members. Nearly 100 more meet in a prison where the church works.
Few ministers in Malawi are paid for their labor. In the village of Jali, Nsapato works as a farmer, growing enough food to feed his family.
Misomali, 80, gets a little financial support from the church in Zomba, but not enough to live on. But, like his smiling counterpart in the village, Misomali has no plans to stop preaching the Gospel, he said in Chichewa.
“He will minister until he is called up,” an interpreter translated.
REPUBLIC OF MALAWI
LOCATION: Southern Africa, bordering Mozambique, Tanzania and Zambia
CAPITAL: Lilongwe (pronounced “lil-ONG-way”)
POPULATION: 15.4 million, one of the most densely populated nations in Africa.
RELIGION: Christian: 79.9 percent; Muslim: 12.8 percent; other/none: 7.3 percent
HISTORY: In 1859, explorer and missionary David Livingstone encountered Lake Malawi. Livingstone adopted the motto “Christianity, Commerce and Civilization.” Missionaries brought education and medicine, and Malawians began to associate Christianity with a better life, said Bisani Mphongolo, assistant director of Namikango Mission. Formerly the Nyasaland Protectorate, Malawi became independent of Britain in 1964 and adopted its current flag July 29, 2010.
CHURCHES OF CHRIST: Malawian Elaton Kundago planted the first congregation in 1906. U.S. missionaries arrived in the 1950s. Today the country, about the size of Pennsylvania, has 4,000-plus congregations. Churches of Christ that have supported work in Malawi include the Pleasant Valley church in Mobile, Ala.; the Thomaston Road church in Macon, Ga.; the St. Augustine Road church in Valdosta, Ga.; the Mill Street church in Cassville, Mo.; the Elm and Hudson church in Altus, Okla.; and the College Hill church in Fort Worth, Texas.
FOR MORE INFORMATION: missionmalawi.org, ccbcmzuzu.org, malawiproject.org
SOURCES: Interviews, “Churches of Christ Around the World” by Mac Lynn, cia.gov, news.bbc.co.uk