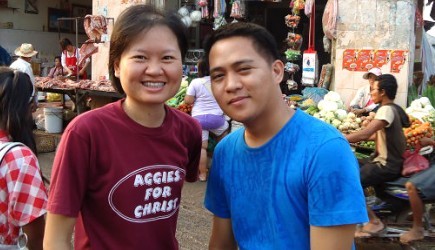 Erik Tryggestad
Anti-government protests have stalled traffic, closed schools and disrupted lives in Bangkok, Thailand, said Kathryn Miller, who serves on a mission team there with her husband, Andy.
The team ministers to Bangkok’s massive student population. Ramkhamhaeng University in Bangkok has an estimated student body of 600,000.
But many students have left the city for their homes due to the protests, Kathryn Miller said.
At least 21 people died and 800 were injured in recent clashes between protesters and Thai troops in Bangkok, according to news reports.
The protesters, known as the Red Shirts, are supporters of former Prime Minister Thaksin Shinawatra, who was ousted by the military in 2006.
In response to the events in Bangkok, hundreds of Red Shirts reportedly forced their way into government offices in the northern Thai cities of Chiang Mai and Udon Thani, the BBC reported.
“As Christians, we are praying that God will give (our leaders) wisdom to solve the problem and bring peace back to our country,” said Wisarat Kaewsiribandit, a church member in Chiang Mai who works with a campus ministry there.
The protests have kept tourists away from Thailand and have created stress and frustration among the people of Chiang Mai, Kaewsiribandit told The Christian Chronicle.
In Bangkok, members of the mission team have talked with Thai Christians “about (how) our faith is not dependent on government, but on God,” Kathryn Miller said. “Also, with non-Christians we have been able to share our peace that only God can give.”
READ UPDATES on Kathryn and Andy Miller’s blog, andykathryn-taiforthesavior.blogspot.com.