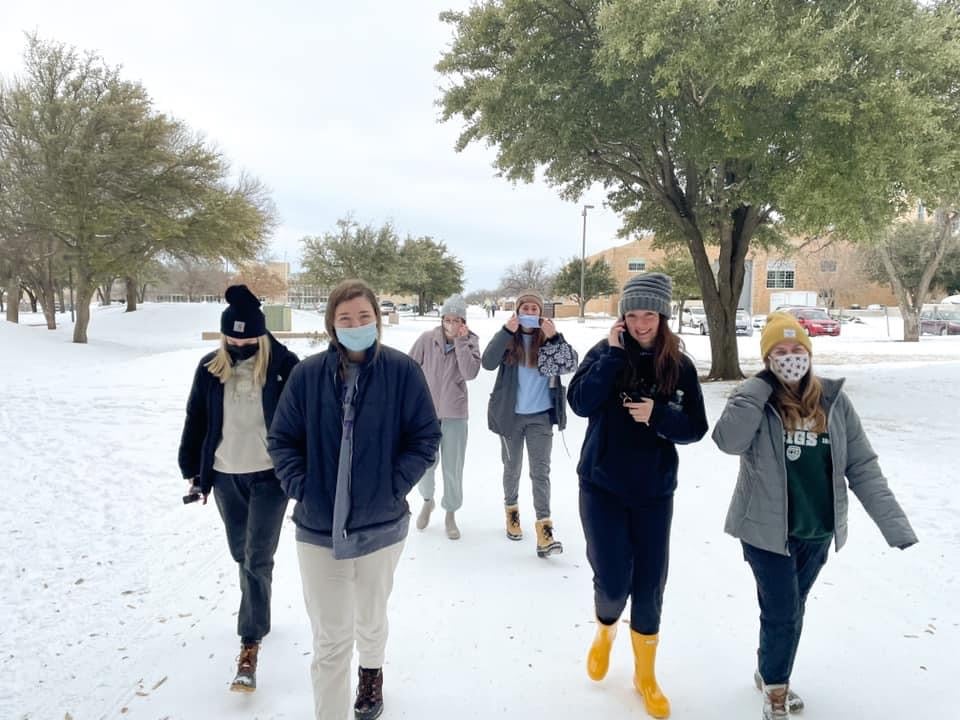 'Everyone in the church and city is helping each other,' a Houston minister says.

Texans were powerless against a winter storm that blasted all 254 of its counties beginning on Valentine’s Day. Millions of residents lost power and water in homes built to withstand heat or hurricanes, not ice and snow.

Christians across the Lone Star State battled power outages, frigid temperatures, busted pipes, boil mandates and mental fatigue from so many “unprecedented” events — all while helping as many people as they can.

Related: Hotel rooms — and hope — for the homeless

The Electric Reliability Council of Texas, or ERCOT, which manages about 90 percent of the state’s power for 26 million customers, initiated rolling blackouts early Monday morning in an effort to prevent a statewide outage. Texas, Alaska and Hawaii are the only states with their own power grids, independent from the two multi-state grids that serve the rest of the country.

Quickly, the rolling blackouts became sustained outages, with many losing power for two, three, even four days. Firefighters watched houses burn to the ground because hydrants were frozen or dry.

“Everyone in the church and city is helping each other. We have a family staying with us and have had people stop by to charge phones and take a shower,” said David Duncan, preaching minister for the Memorial Church of Christ in Houston.

“Before this week, there were two blessings I hadn’t thanked God for in a long time: water and power,” said Duncan, who plans to be more basic in his prayers from here on out.

Well, Southsiders, we have good news and bad news…The bad news is a pipe burst and the auditorium, foyer, and other…

Posted by Southside Church of Christ on Thursday, February 18, 2021

A water shortage in Abilene

“We have water in a pond on campus and two large swimming pools,” said Tamara Long, ACU’s vice president of student life and enrollment, “so in the middle of the night, we were pumping water out of the pond and into trash cans.”

You may never see this again in your life. Every. Single. County in this massive state is now under a WINTER STORM…

ACU dorms are on a tankless system with industrial toilets, so it’s not as simple as melting snow and putting it in the back of a tank at home, said Long, who helped teach residents how to thrust two gallons of pond water into a tankless toilet.

“We emptied as many trash cans as we could, marked them at the two-gallon point and put them in dorm lobbies,” she added. “When we didn’t think it could get more crazy, we lost power to three halls that house sophomores. And then a pipe burst into eight rooms, affecting 16 women. I was heartbroken.” 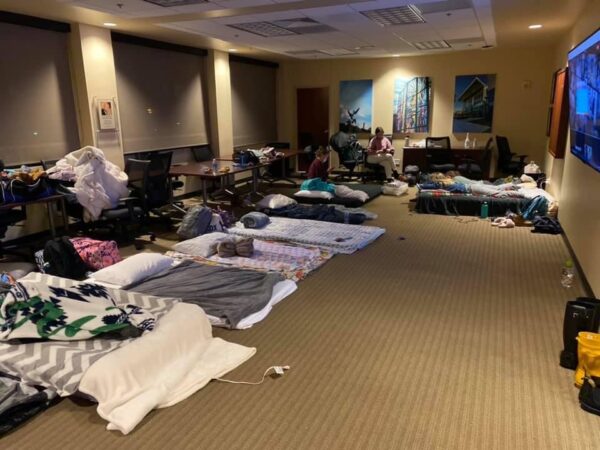 ‘Putting on a happy face’

The university, which is associated with Churches of Christ, eventually opened its Hunter Welcome Center as a warming shelter. Students brought pets, bedding, games and food. Many spent two nights there. The school also opened its cafeteria, The Bean, to anyone with an ACU ID, whether they had a meal plan or not.

Off campus, Lance Parrish feels fortunate his church community is helping his family during this extreme winter weather, but he’s exhausted.

“We are putting on a happy face for the kids. We talk about how cool it is that we will have a family campout by the fire. Then my wife and I lay down and text each other about how scared we are so they don’t hear us talking,” said Parrish, youth minister for the Hillcrest Church of Christ in Abilene who acknowledges he’s reached his breaking point with unprecedented times. 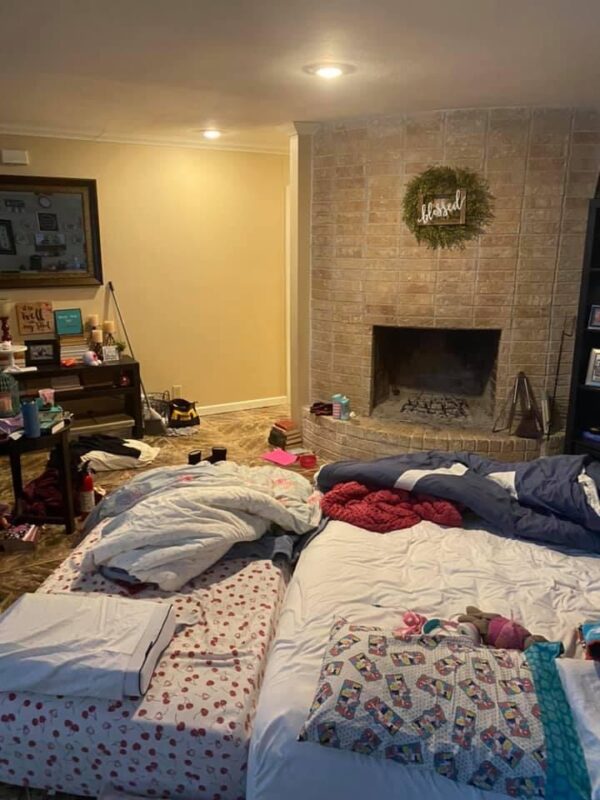 The scene at the Parrish home.

“But we’ve been very fortunate,” he added. “We posted on social media about sleeping on the floor by a fire, and my phone started blowing up with people wanting to help. There is no shortage of people looking out for us. But my heart goes out to our neighbors. I don’t know how connected they are. How do you do this without a community around you?”

And how do you survive if you are already worn down from the pandemic?

“I feel bad for those who were already mentally struggling,” said Marna Wewe, a member of the Westover Church of Christ in Austin. “My friends don’t have heat or electricity. They said they were fine, just mentally exhausted. I hadn’t thought about trying to build a fire every day if you are already struggling.”

It may be cold, but it is beautiful!

Posted by Lakeside Church of Christ on Tuesday, February 16, 2021

‘Tired of being tired’ 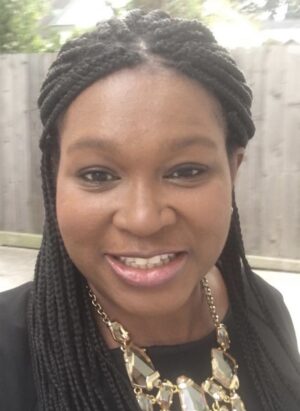 And back in Houston, Ife Gbosi is struggling.

The Abilene Christian alumnus went to bed Sunday night thinking nothing exceptional would happen. Then she woke up Monday morning to no electricity and no running water in her kitchen.

With the temperature drastically dropping during the day, Gbosi and her family decided to sleep on the floor together in their son’s nursery. They slept in hats and gloves and still woke up freezing on Tuesday, said Gbosi, who felt like a horrible mom because her two young children’s faces were cold and she couldn’t warm them.

That same morning, Gbosi tried to call hotels but didn’t have cell service. So she messaged her sister in Washington, D.C., and had her make a reservation for them in downtown Houston. After waiting in a long line to check in, they were told the hotel didn’t have water. They checked in anyway.

“My story isn’t sad. I’m just tired of being tired,” said Gbosi, a product manager for a major bank and a member of City Life Church, a nondenominational congregation. “I work from home because of the pandemic, so I’m texting my boss in the hotel about our situation, and he’s asking, ‘Will you work from the hotel tomorrow?’ He’s in North Carolina where it snows. He doesn’t get it.

“I’m acutely aware that in all of this, I am on the better side. I have resources and can go to a hotel. But I am tired. Trying to explain to a 5-year old, ‘I know I said it wasn’t safe to go anywhere, but trust me, it’s OK now.’

“Up until now,” the mother of two said, “I wouldn’t have gone to a hotel. But we had to prioritize to stay warm.” 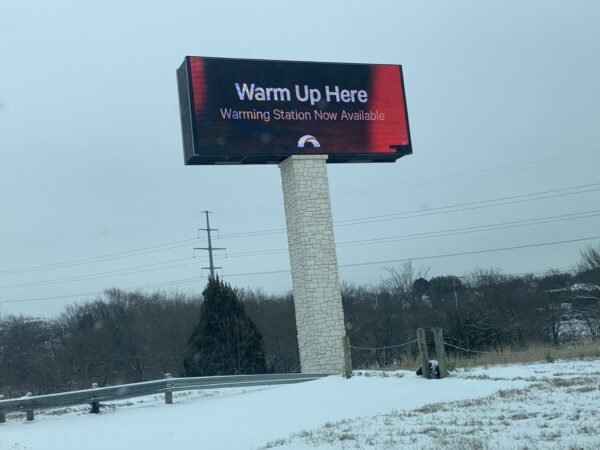 The Hills Church of Christ in North Richland Hills, Texas, invites residents without power to warm up at the church building.

Church opens as a warming station

Across the state, power outages forced countless Texans into hotels or homes of friends and family for the first time in almost a year, given the separation required by COVID-19 concerns.

“We were without power for a day, so [family] opened their warm home to us,” Melody Shaw, member of The Hills Church of Christ in North Richland Hills, northeast of Fort Worth, wrote on Facebook. “It was the first time we’ve been in a house with people in a very long time.”

Others said the catastrophic storm made life feel almost normal for the first time in a long time.

“This took my mind off of COVID for a minute,” said Sandy Felker, a minister’s wife at the Lakeside Church of Christ in Mansfield, south of Fort Worth. In a state of emergency “we got to minister to people and not worry about masks.”

“We had a 76-year-old woman who had been without power since early Monday come into our family life center and shoot baskets.”

The Felkers opened their church building to anyone in need of a warm place to stay, but most church members didn’t want to leave their homes in fear that a pipe would burst and they wouldn’t be home to clean it up. For the 36 hours the Felkers were without power, they warmed up at their church with a small group, calling it the tamest lock-in ever.

Across the Dallas-Fort Worth Metroplex, things were a little more lively.

“We had a 76-year-old woman who had been without power since early Monday come into our family life center and shoot baskets,” said David Meyer, executive minister at The Hills church, which partnered with the city of North Richland Hills and the police department to open as a warming station. “She said she hadn’t played in years and wanted to try. She even got some in.”

The Hills church initially took the posture of turning down thermostats and turning off lights from a conservation standpoint, but leaders quickly realized there was a community need, Meyer said. Around 100 non-church members have come to their building to warm up.

Other churches didn’t fare as well.

“We were inspecting the building to make sure we were good to open as a warming station, and it was raining in the north foyer,” said Jeff Hubbard, lead minister for the North Davis Church of Christ in Arlington.

In a Facebook video, Hubbard stood in the auditorium — knee deep in water — as he shared the devastating news with church members.

“But a cool thing happened,” said Hubbard. “I’ve gotten calls from Churches of Christ around the Metroplex, even Baptist and community churches, all offering for us to use their buildings or help with cleanup. And we aren’t the only church in Arlington in bad shape.” 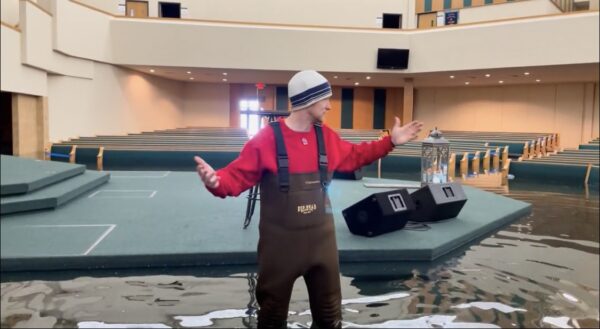 Jeff Hubbard talks about the flood damage at the North Davis Church of Christ in Arlington, Texas.

More than 100,000 Texans are still without electricity, and many cities are under a boil-water mandate heading into the weekend. Others are left with damaged homes. And as a thaw begins, water mains have burst in many places, again leaving residents without water.

It might be easy, and perfectly acceptable, to focus on personal ruin right now.

But not for church members in Texas.

“I felt very honored and blessed that so many churches reached out,” Hubbard said. “That’s what Christianity is all about.” 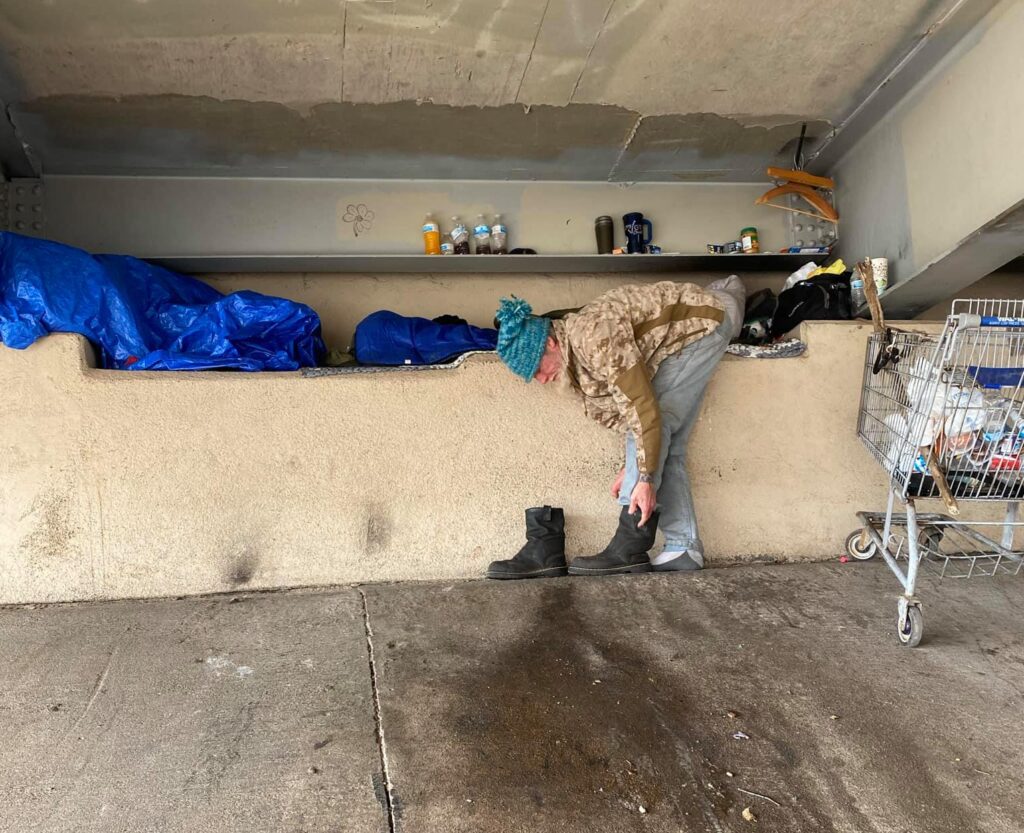 Hotel rooms — and hope — for the homeless

OKLAHOMA CITY — When the weather forecast called for two major…