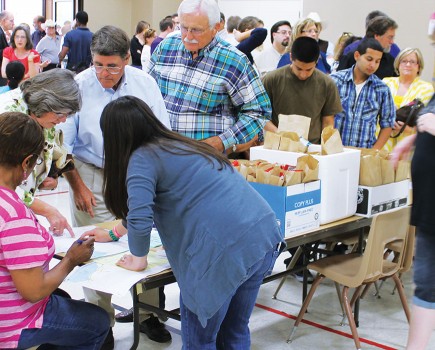 Texas tornado ‘blew in a 2-foot layer of love’

In the bright light, Nelson — who survived the twister huddled in a closet as her roof caved in — said she couldn’t help but see Jesus.
“It brought peace and comfort,” said Nelson, whose husband, Jerry, preaches for the Westhill Church of Christ in this city of 28,000, about 30 miles south of Fort Worth. “I saw it as God’s presence in our dark world.” 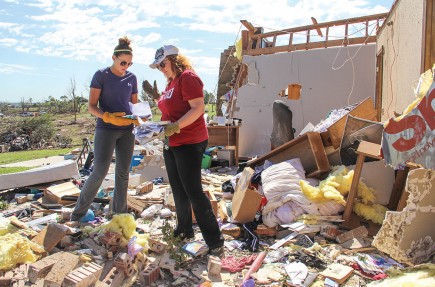 In Oklahoma and Texas, Christians share survival tales and help with relief after the killer twitters. Scroll down for links to The Christian Chronicle’s expanded coverage.In the days following tornadoes that flattened hundreds of North Texas homes May 15, Churches of Christ in storm-battered Cleburne and Granbury shined the light of Jesus — serving as hubs for disaster relief.
“Right from the get-go, the church offered up the use of its building, and it was so dynamic because the location is just to the edge of where the major damage is,” said Rick Holden, Cleburne’s city manager. “So it gave us a chance to funnel a mass volume of people away from the command center and get them processed.”
More than 1,000 volunteers and contractors flocked to the Westhill family life center, where they filled out paperwork and received permits to enter the disaster zone.

Cleburne Fire Chief Clint Ishmael — a Westhill member — said the 500-member congregation has endeavored to improve its hospitality toward the community.
“This fit right into that … to take care of our people here in Cleburne,” Ishmael said.
The family life center became a launching point, too, for feeding victims and filled up quickly with donated groceries, bottled water and paper products. 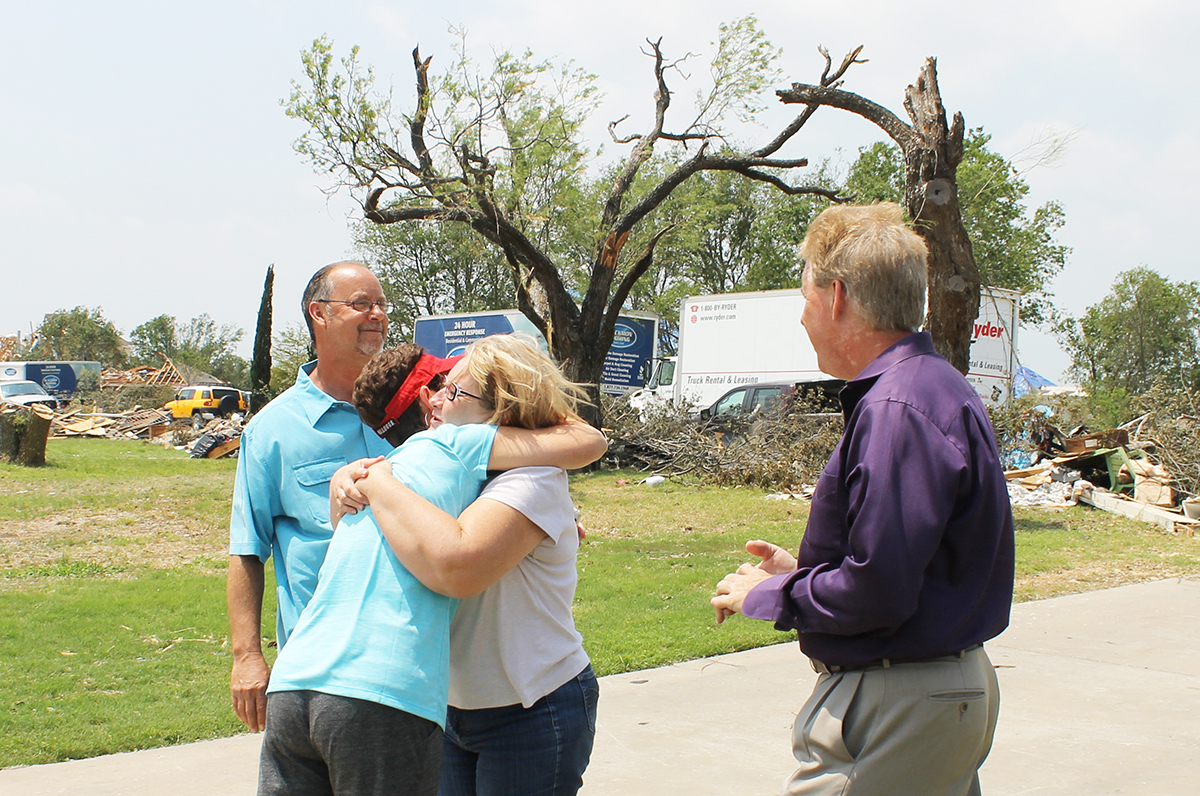 One victim — his voice choked with tears — called to express thanks for the food, youth and family minister Gary Albritton told the congregation.
“Just consider it from Jesus, because that’s why we do what we do,” Albritton told the man.
About 30 miles northwest of Cleburne, the Granbury Church of Christ fellowship hall also served as the disaster assistance center for its community.
Insurance companies and charities such as the Red Cross, the Salvation Army and Mission Granbury set up booths inside the church facility, where hundreds of victims lined up to register for assistance. 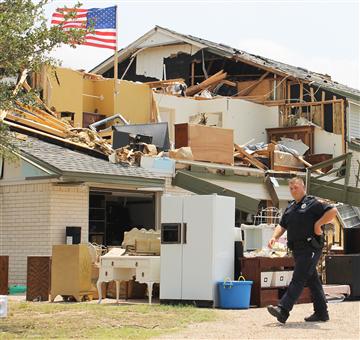 A Cleburne, Texas, police officer leaves a home damaged by a tornado after visiting with the residents. (PHOTO BY BOBBY ROSS JR.)
Many victims accepted emergency food boxes provided by Nashville, Tenn.-based Churches of Christ Disaster Relief Effort, which dispatched a tractor-trailer to Granbury.
“The church here has an excellent reputation for just being benevolent and just reaching out in all kinds of ways,” said John Knox, Granbury’s preaching minister. “I think that really showed.”
Besides his work with the 750-member church, Knox also serves as Granbury’s police chaplain. In that role, he helped notify the relatives of six tornado victims who died.
Knox also ministered to the city’s first responders — including dispatchers, firefighters and police officers.
“Some of it’s as simple as stopping at Sonic and bringing our dispatchers a drink,” he said. “Just talking and listening, that goes a long way. Later, we’ll do some formal critical incident debriefings, but they’re not ready for that yet.” 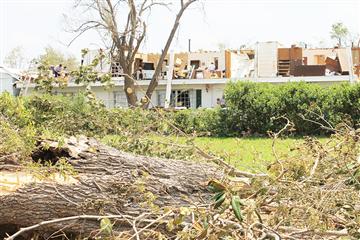 In Texas, victims of a tornado work to salvage belongings. (PHOTO BY BOBBY ROSS JR.)
The church plans to be involved in the long-term recovery effort, said Knox, who also serves as president of the Lake Granbury Ministerial Alliance.
Much of that recovery work will occur through the congregation’s Christian Service Center, which provides a food pantry, furniture, clothes and other services to the needy.
“We feel like this is going to be at least a yearlong process,” Knox said.
No Granbury members suffered injuries or lost homes.
Likewise, all Westhill members escaped the storm physically unscathed.
But the homes of 15 to 20 Westhill families sustained damages — and some were total losses, Jerry Nelson said. 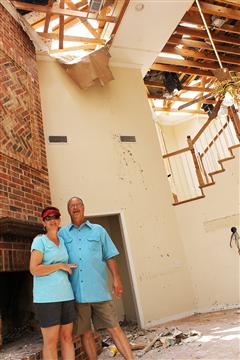 Sun pokes through the roof of Jeff and Jamie Dugger’s tornado-damaged home in Cleburne, Texas. (PHOTO BY BOBBY ROSS JR.)
Longtime Westhill members Jeff and Jamie Dugger hid behind kitchen cabinets as the tornado roared overhead.
“It just lasted forever,” said Jeff Dugger, whose ears popped from the pressure. “That’s when our roof started lifting off and our walls started lifting up.”
Insulation from the attic fell on them and glass swirled. But they survived, he said, with “not a bruise, not a scratch.”
In the storm’s aftermath, fellow Christians showed up at the Duggers’ place to clear debris and pick up broken limbs.
The couple “soaked up the love and the groceries” at a different friend’s house each night, Jeff Dugger said.
“The storm hit, and it left a lot in its wake,” he said. “But it blew in a 2-foot layer of love that’s all over this town. You can’t see it, but you can feel it.”
Jamie Dugger said the outpouring of love has affirmed her faith in God.
“How everybody has helped has just been the most incredible,” the mother of four said, her voice trailing off as she grasped for the right word. “I’m just so grateful.”
TORNADOES: EXPANDED COVERAGE
• ‘God put his hand on us’: In Oklahoma, Christians ask why even as they rely on their faith.
• Inside Story column: After the tornado, Oklahoma church sings God’s praises.
•  Disaster relief trucks roll: Once again, Nashville, Tenn.-based national ministry quick to help victims.

• Close to home: Christian reporter and son cope with loss of friend.