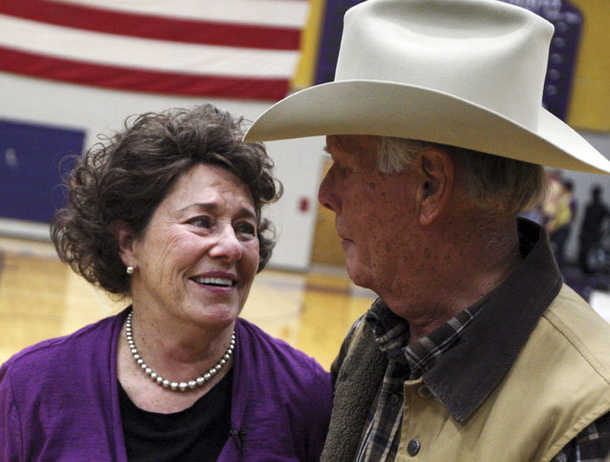 Leta Andrews accepts congratulations from her husband, David, after her record win. (Photo by Ron Jenkins, Fort Worth Star-Telegram, via www.star-telegram.com)

The winningest high school basketball coach in U.S. history is a faithful member of the Church of Christ.
Coach Leta Andrews of Granbury High School in Texas earned her historic win No. 1,334 this week.
The Fort Worth Star-Telegram reported:

GRANBURY — As the final minute of Granbury’s home game against Midlothian ticked away Tuesday, the Pirates’ home crowd rose, cheering loudly.
The fans were yelling for more than a 62-43 Granbury win. They chanted coach Leta Andrews’ name as she picked up her 1,334th career victory.
With the victory, Andrews, who already has the record for the most high school girls coaching wins in the nation, passed Fort Worth Dunbar legend Robert Hughes’ mark for the most boys wins.
“It has been a wonderful ride,” Andrews told the packed home crowd after the game ended.
When the final seconds disappeared, Andrews’ players lifted her in celebration and carried her to midcourt. As Andrews received flowers and praise, the Pirates used giant strips of red tape to cross off the final win on a countdown banner on the wall.
Then Andrews — with tears rolling down her face — hugged her husband, David, and the rest of her family. The party continued as Andrews invited more than 20 of her former players to join her on the court.

Richard Blythe, minister of the Lake Merced Church of Christ in San Francisco, alerted The Christian Chronicle to Andrews’ accomplishment.
“I was at Magic Valley Christian College in Albion, Idaho, with Leta and Dave 50 years ago,” Blythe said in a Facebook message. “When I knew them, they were a great Christian family!”
They still are.
“She is a very active member here,” said John Knox, preaching minister for the Granbury Church of Christ. “Leta is an amazing Christian lady, whom we hold in very high esteem.”
Read an Associated Press feature on Andrews.
httpv://www.youtube.com/watch?v=OXiRITD-gic&feature=player_embedded