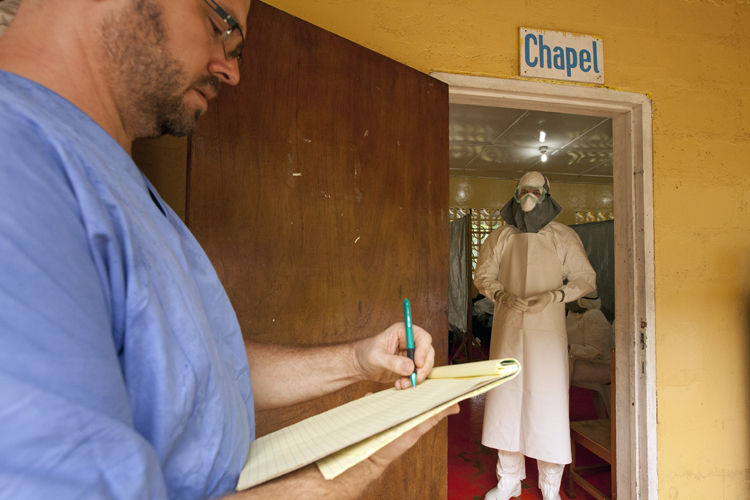 See updates on Dr. Brantly here, and find links to more coverage of Churches of Christ and the Ebola crisis below.

FORT WORTH — The mood at Southside Church of Christ on Sunday morning was somber and quiet. The congregation had just learned that one of its beloved members, a doctor working in Liberia, had tested positive for the deadly Ebola virus. 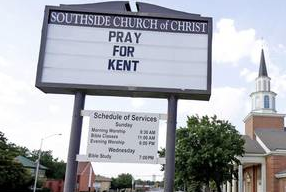 The sign at the Southside Church of Christ in Fort Worth, Texas, asks for prayers for Dr. Kent Brantly, a member of the congregation. (PHOTO VIA DALLASNEWS.COM) Dr. Kent Brantly, 33, a family physician and father of two, has spent much of his life caring for others. He felt called to travel in October to Monrovia, Liberia, with an international relief agency, Samaritan’s Purse, and started treating Ebola patients in June.

Even after he was diagnosed, he asked his home congregation for prayers not only for himself, but for his colleagues.

“He has such a compassionate heart,” said Jason Brewington, a church member who worked with Brantly at Fort Worth’s John Peter Smith Hospital. “Even in the midst of this, he’s asking not just for himself, but for others.”

The Ebola virus was discovered in 1976. It kills 90 percent of its victims, who suffer from internal and external bleeding and organ failure. It is spread through infected bodily fluids such as saliva, vomit and blood. Doctors treating patients with Ebola wear Tyvek suits, latex gloves, surgical masks and eye goggles, but these precautions do not provide complete protection against the virus.

Photos of Brantly working in Liberia show him swathed head to toe in white protective coveralls, gloves and a head-and-face mask that he wore for hours a day while treating Ebola patients.

In a separate story, the Fort Worth Star-Telegram quoted an email that Brantly sent a colleague and close friend:

“I’m praying fervently that God will help me survive this disease,” Brantly said. “Please continue to pray along with me and my friend Nancy who is also very sick and for the doctors who are taking care of us. Peace. Kent.”

Another JPS doctor, Jason Brewington, said he had known Brantly for five years and that they were both members of the same congregation at Southside Church of Christ in Fort Worth. He described Brantly as a person of “deep faith” who is buoyed by the prayers of his congregation back home.

“As a congregation, we’re somber, we’re sad that he has this illness but we know through our prayers and faith the Lord’s will will be done and Kent will be able to glorify God throughout this illness,” Brewington said.

Brantly is a 2003 graduate of Abilene Christian University in Texas, and his diagnosis is making international headlines, including a story on the front page of today’s USA Today.

Samaritan’s Purse requests prayers for him and his family.

“We appreciate so much all the words of comfort and acts of kindness extended to our family,” Amber Brantly, Kent’s wife, and her immediate family said in a statement issued through Samaritan’s Purse. “As people with a deep faith in Jesus, we sincerely thank the thousands of people worldwide who have lifted up Kent and this dreadful situation in prayer. We continue to lean on that faith and take great consolation in our God in these times.”