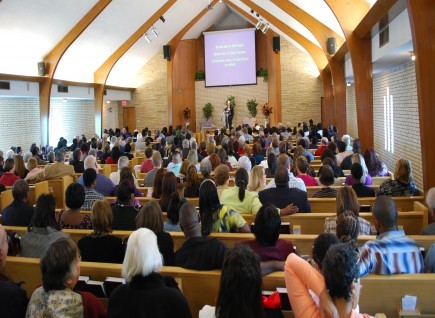 Joy McMillon
On Sundays, when the morning sunlight fills the vaulted space of the Freetown Road church in Grand Prairie, Texas, song leader Gerald Turner sometimes leads an up-tempo gospel song in the place of a sober standard like “Blessed Assurance.”
“If you aren’t moved by this singing, you’re dead,” said Rita Gough, a retired school teacher and a member for 19 years.
Pulpit minister David Thurman agrees.
“It’s very seldom that a preacher can forget about his sermon during the singing, but I forget completely about mine. I always hope he doesn’t lead something before the sermon that gets very emotional, because I’m right there with him.”
Located between Dallas and Fort Worth, Texas, the congregation is mixed –black and white — as of one year ago. Recently a Spanish-speaking Hispanic service began at the building.
Everyone is welcome at Freetown Road: The new, racially-diverse congregation created in the marriage of an aging, predominately white congregation and a young, predominately black East Arlington church.
Before June 2008, they worshiped one and a half miles — and a universe — apart.
Unlike most mergers, this one occurred within a week, said James Williams III, preaching minister for the East Arlington church, which he helped to begin in 2003.
When he told Freetown elder Jimmy Criswell that the energetic, evangelistic, congregation of 80 members had outgrown their rented facilities and was looking for a new place to meet, Criswell shared his concern for the future of the 46-year-old Freetown Road church. Their membership had declined from 400 to 130.
Criswell — who is now deceased — told the African-American minister, “You have everything we need, and we have what you need,” said Williams.
He invited Williams and East Arlington to start meeting with them the first Sunday in June. Williams, who has always disliked the idea of racially segregated congregations, told him that he would place membership, and he hoped the rest of the congregation would do likewise.
Half of the East Arlington church came over the first week. After a couple of months, about 75 percent of their members placed membership, said Williams, now an associate minister at Freetown Road.
Gough said the congregation was impressed with East Arlington members as soon as they arrived. “Here they came, quoting book, chapter and verse. They knew the Scriptures, and they were deeply committed to the Word and living it.”
In the past year a new, racially diverse leadership team has been put in place: four elders, two white and two black; three ministers, two white and one black. The song leaders includes three black men.  When deacons are appointed in the near future, that diversity will probably be seen there also, Thurman said.
According to elder Glenn Holveck, the influx of 80 Christians has lifted the spirits of the original Freetown Road members.
“They brought an energy to us that we didn’t have,” he said.  “They may be one-third of the congregation, but they are two-thirds of the energy.”

Members say there were some growing pains on both sides, especially in the beginning. For instance, Edith Brown, a member of the East Arlington church, supported the merger at first. Later she had second thoughts.
“Initially, I thought it was the work of the Lord getting us together, and this would be a great adventure,” Brown said. “It was never God’s plan for us to have Caucasian churches and black churches.”
Recently, while teaching a women’s Bible class on the subject of unity from Ephesians 4, she shared some of her feelings with class members.
“After we got here, I thought, ‘What have we done? I was not in my comfort zone any longer. What if they don’t like us? Or, What if we don’t like them?’”
But she told the women that she began to realize “Christians aren’t supposed to be in their comfort zone.”
Today Brown is “extremely happy,” and says she was surprised and touched that so many of the Freetown Road’s “older sisters have received us like we were their children and their grandchildren.”

“The core of the church is moving forward in love. We are determined — as Scripture says — to stick this out together,” Brown said.
Church members are still in the process of learning each others’ ways and adjusting to differences between the music, worship and church life in the different cultures, Thurman said.
For instance, they no longer use PowerPoint during song services. Singing from the book allows the new song leaders more latitude for changing the words or varying the tempo if they desire.
Thurman is sensitive to the fact that most of the former East Arlington members continue to use the King James Version while he preaches from a modern version.
“All of us are learning that just because we did something one way doesn’t mean it has to be done that way forever,” said Gough.
Members are encouraged by several positive signs. Since the merger, new leadership and ministry teams have been formed. Contributions and attendance are up, and the church has begun to grow.
“East Arlington brought an evangelistic fervor we needed,” says Thurman.
Attendance regularly runs between 220 and 225, with as many as 240 on a recent Sunday. Community visitors are increasing, including several Hispanic and black members who have obeyed the gospel, said Thurman, noting that Grand Prairie is now 65 percent Hispanic.
He believes their increased contributions should eventually allow them to enlarge and expand their ministry, especially in the needed areas of benevolence and outreach.
Has this been a successful, authentic merger?
“If you asked me that in 10 years, I could probably give you a better answer,” Thurman says. “But I will say that there is a spirit of love, cooperation and submission here.  Nobody is insisting on his own way.”