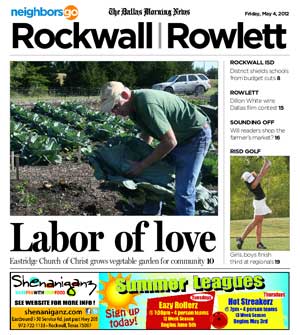 Beyond the hill behind Eastridge Church of Christ in Rockwall is a plot of land the church has dedicated to sowing more than the “fruits of the Spirit.”
What was a grassy field when the church opened August 2005 is now a quarter-acre of neatly plowed rows of vegetables and fruits typically carted from grocery stands.
Now in its fourth growing season, the garden — started by church deacon Clyde Smith — was planted during the economic downturn in 2008.
Its beginnings were rooted as a way for church members to balance their shrinking family paychecks with the burgeoning need for wholesome food, said Smith, a member of the congregation since 2001 who also tends to his own 900-square-foot home garden.
“We had the space, so we figured why not feed people with it,” said Dwight Walker, an elder at the church.
The congregation now reaps the fruits of its own labors. Buckets of produce — most recently cabbage and turnips — are harvested on Saturday by church members and carted to a table in the church lobby for members to load for free into clear plastic bags each Sunday.