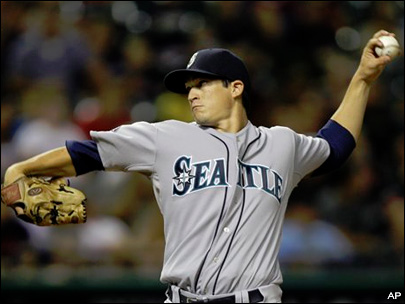 
Texas church member Anthony Vasquez got a “W’ this week in his major-league debut with the Seattle Mariners.
The 24-year-old left-handed pitcher and his parents, Rudy and Lisa, are members of the Northside Church of Christ in San Antonio.

Anthony Vasquez makes his major-league debut against the Cleveland Indians. (Photo via KOMONews.com)

Anthony Vasquez does not know life without baseball. His father, Rudy Vasquez, is a scout for the Los Angeles Angels of Anaheim. Anthony has been a star player since his days at Ronald Reagan High School, where he made the all-state squad. He played one year of college ball at Texas A&M then moved on to play for and graduate from the University of Southern California.
In 2009 Vasquez was drafted by the Seattle Mariners in the 18th round of the first-year player draft. He began the 2011 season at AA Jackson (Tenn.) and soon moved up to play AAA ball for the Tacoma Rainiers. Vasquez pitched well for Tacoma and got his big break when the Mariners headed into Cleveland for a doubleheader and were short of rested pitchers. He took the mound for the second game on Aug. 23 and got the win. His parents and brother were in Cleveland for the game.
In a Facebook posting, Vasquez wrote, “Thank you everyone for your support and your prayers. I couldn’t have been in that situation without you all. Truly blessed to have great friends and family.”

Vasquez, en route to the victory, lasted 5-1/3 innings, giving up nine hits and six runs, five of them earned. He walked two and struck out two. If he returns now to Class AAA Tacoma at least he will have a ‘W’ to take back.
“It felt pretty good, actually,” said Vasquez, who flew all day from Reno on Monday, arriving in Cleveland late in the evening. “I was able to relax a little bit, and settle in. But when you miss your spots like that, sometimes they can make you pay up here.
“I tried to relax as much as I can. I got to the park, and guys were real nice to me, made me feel welcome. I just prepared like any other start.”
Wedge said of Vasquez, “I thought he was up. When he was down, he was good. He got ground balls and some swing-and-misses. He didn’t have quite the command we expected to see. But that first time out is always a mulligan.”