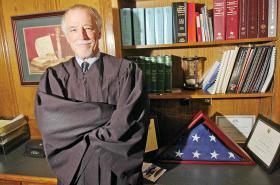 County Judge Rusty Ladd is an advocate for the homeless and works with them through Carpenter’s Church, a ministry of the Broadway Church of Christ in Lubbock, Texas. (Photo by Zach Long, Lubbock Avalanche-Journal)

The Lubbock Avalanche-Journal in Texas reports:

Lubbock County Judge Rusty Ladd has dedicated a significant portion of his adult life to helping homeless people like Danny Brazeal, who was killed in a fight earlier this month.
For more than 20 years, Ladd has worked with, fed and befriended the homeless of West Texas.
“The thing a homeless person misses the most is not food or shelter,” Ladd said. “It’s a genuine relationship with somebody that’s got a stable life going on.”
So Ladd has served that role, being there for people who have no other place to go.
He volunteers through Carpenter’s Church, a downtown ministry dedicated to serving the poor and marginalized.