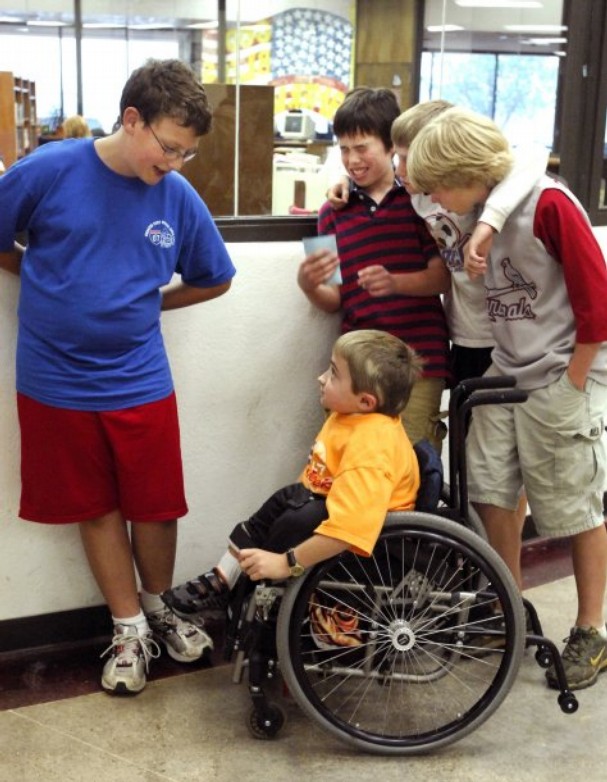 Matt Phillips, center, talks to his friend Korbin Ancel, left, while other boys from his class goof off behind on the last day of class at Wylie Middle School in 2007. (Photo by Nellie Doneva, Abilene Reporter-News, via www.reporternews.com)

The first thing many friends mention about Matthew Phillips was his ever-present smile, often accompanied by a joke or a laugh.
Those were just two of the things he could deliver with enthusiasm from his wheelchair, where osteogenesis imperfect — brittle bone disease — kept him for most of his 16-year life and forced him to undergo surgeries for broken bones.
Phillips, a sophomore at the Academy of Technology, Engineering, Math and Science, died Sunday when, as a friend from Southern Hills Church of Christ said, “His heart just stopped.”
Being in a wheelchair never kept Phillips from making close friends, such as Tyler Roberts, a junior classmate in the ATEMS robotics club.
“Matthew Phillips was a great friend,” he said. “His positive attitude, despite all his medical problems, was an encouragement to me and to the entire ATEMS and Southern Hills family. Matt’s faith in God was strong, and his love for Christ was always evident at school, church and in life. I will never forget the example that Matt has left behind.”