Special assembly in Fort Worth draws members of more than 30 Churches of Christ.
Don Mooney

FORT WORTH, Texas — For over a decade, the Wilkerson-Greines Activity Center was the proud basketball altar where the Dunbar High School Wildcats held services.

On a recent Sunday night, the 5,000-seat arena again buzzed as another local team — members of area Churches of Christ — posted up on the Robert Hughes Sr. floor for a worship assembly demonstrating racial unity in the body of Christ.

Churches from Tarrant County — and beyond — gathered for a unified service in response to the politically charged racial divide that threatens spiritual waters, organizers said.

More than 1,300 church members streamed into the activity center to lay the spiritual groundwork for bridging the not-so-imaginary racial divide that often exists in churches across the United States.

The event was the second annual areawide racial unity service, following a first endeavor hosted by the Southside Church of Christ in Fort Worth in 2016. 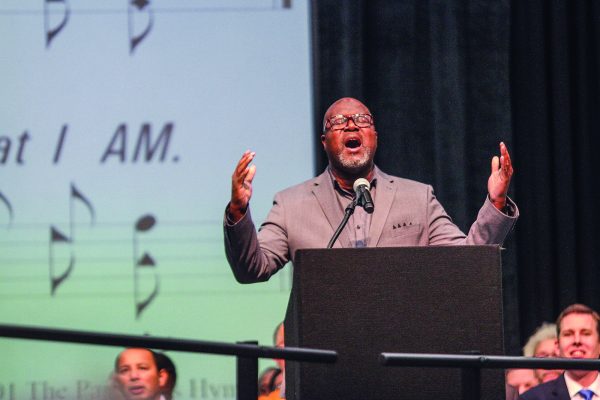 Gerald G. Turner from the Lancaster Church of Christ in Texas leads singing.

“The whole idea of a unity service stemmed from the tragic police shooting that put the national spotlight on Dallas when several officers were killed,” Southside minister Steve Cloer said. The first unity service was put together rather quickly and resulted in a capacity crowd in Southside’s 650-seat auditorium.

“This time, with better planning, over 140 preachers were involved, and somewhere in the vicinity of over 1,300 members of the body of Christ were in attendance,” Cloer said.

Richmond Avenue Church of Christ minister Victor Norris, who attended Dunbar, said: “This has been one of the biggest crowds since the Dunbar glory days. This crowd was united for a need for racial unity with the blood of Jesus. That’s a slam dunk!”

Filed under: National Race Racial reconciliation and the church Texas