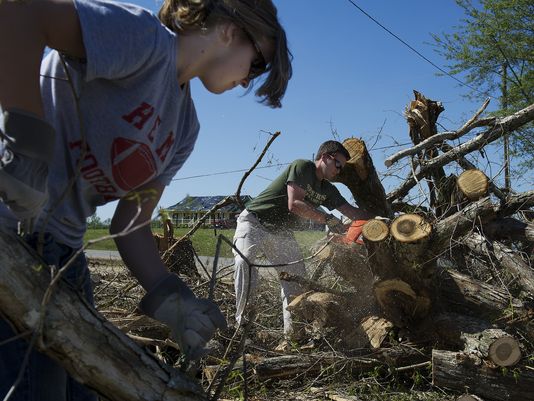 Stan Jean knows how to use a chainsaw, but he felt a bit out-matched after a tornado turned the trees around his Lincoln County home into an obstacle course.

“There is no way you could do it by yourself,” he said, gazing toward the folks working in his yard.

They had arrived in a caravan on Saturday — three trucks with Williamson County tags, one hauling a Bobcat skid-steer loader. They had set their alarms to get up before dawn, meeting up at Berry’s Chapel Church of Christ in Franklin and traveling to Fayetteville.

The group of nine included men, women, a college senior and a teenager. They were among about 75 volunteers who had registered as of noon to help clean up after Monday’s tornadoes.

While the group from Williamson County worked, private funeral services were held for the only two people killed, John and Karen Prince.

Berry’s Chapel volunteer organizer Mark Sullivan said he wanted to “pay it forward,” recalling how strangers had helped in Fairview when tornado ravaged his community a few years ago. Some in the Williamson County group also had helped with recovery efforts on the Mississippi Gulf Coast after Hurricane Katrina. Talley Floyd, who helped Sullivan organize the work day in Lincoln County, said disaster relief was faith-affirming experience.

See our coverage of recent tornadoes and links to help in recovery efforts.