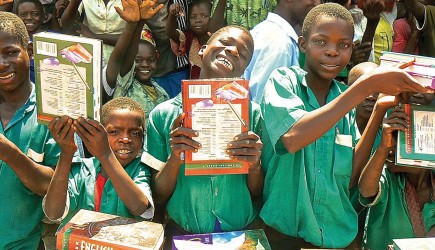 Erik Tryggestad
Nolan and Brielle Read live up to their last name.
The brother and sister sent gifts of literacy — 33,000 school textbooks and 71 laptop computers —  to the people of Malawi, a slender, landlocked nation in southern Africa.
The teens and their family, mother Leah, father Bryson and brother Lincoln, attend the Western Hills Church of Christ in Austin, Texas.
In 2011, Dick and Suzi Stephens visited the congregation and talked about their work with The Malawi Project, a church-supported nonprofit that seeks to help Malawians escape the cycle of poverty through medical, agricultural and educational projects.
Brielle Read, 14, a freshman at Austin High School, decided to help the people of Malawi as a project for her Girl Scout Silver Award, which requires scouts to perform a community service.
“I was trying to focus my project on something to do with education,” she said. She brainstormed ideas with her mother, a teacher, and learned that her school district was preparing to replace its textbooks.
Brielle contacted school officials and arranged for the gently used textbooks — mostly language arts and English — to be delivered to The Malawi Project’s headquarters in Indiana. A member of the Western Hills church who owns a warehouse provided storage for the books in Austin. Church members collected funds to help ship the books overseas.
In Malawi, students eagerly flipped through the pages of the books at the Nankhunda Primary School. The school had very few textbooks before the shipment, said Wilson Tembo, a Malawian church member who works with Namikango Mission and The Malawi Project.
A 13-year-old boy, Robson Kamwendo, told Tembo that “the shortage of teaching and learning materials is one key setback to a child’s success … to properly skyrocket with their education.”
“Pupils depend totally on teacher’s lessons,” he added, and the textbooks allow them to study on their own.
Nolan Read, 17, a senior at Austin High, asked friends, neighbors and businesses for their used laptop computers — no more than 10 years old — as part of his Eagle Scout project.
He collected 117 machines and, along with his fellow Boy Scouts, set up a workshop and performed quality control tests.
“Only 71 of them were in actually good enough condition so that I could donate them,” he said.
The scouts wiped the laptops’ hard drives and installed Linux, a simple operating system that performs well on older computers.
Tembo, who had used his previous laptop to the point where it detached from its screen, received the first of the refurbished computers.
“He was very thankful … to get on the Internet again,” Nolan Read said.
The other laptops will go to Malawi in the luggage of mission groups traveling to Africa, Dick Stephens said.
Malawians, including students at a church-supported school, will use the computers as they train to become teachers, doctors and ministers.
Dick Stephens, who makes regular trips to Malawi, said he has seen firsthand “some of the broken and worn-out things people send to Africa.”
“It is a breath of fresh air to see a young man so careful to send only the best,” Dick Stephens said. “These computers will last a long time in the hands of the Malawians.”
Many Malawians never have seen pictures of the world outside their villages, added Scott Gordon, president of The Malawi Project.
“It is hard for anyone in the developed world to realize the importance of these computers,” Gordon said. “For so many, this is the only library they will ever see. … Now they have the whole world open to view.”
For Brielle Read, the experience of collecting the books and computers was faith-affirming.
“I always heard these amazing stories about kids who could do these things and make a difference in the world,” she said. “But I didn’t think I could do anything really big.”
Now she knows otherwise.
The teens have inspired other members of the Western Hills church, minister George Bomar said.
“They have set a faith course for all of us to follow,” Bomar said. “Their faith has shown us all that with God nothing is impossible.”
For more information, see www.malawiproject.org.