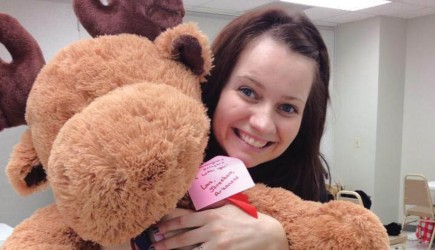 STAFF REPORTS
JONESBORO, Ark. — Meagan Cremeens, a member of the Southwest Church of Christ, was a Westside Elementary School student when a massacre at nearby Westside Middle School claimed five lives in 1998.
After the Jonesboro tragedy, Cremeens remembers that students and teachers received cards, letters and gifts of support from around the world.
In the aftermath of the recent shooting rampage at Sandy Hook Elementary School in Newtown, Conn., Cremeens said she felt an urgent need to “do something to give back.”
She contacted Southwest preacher Jimmy Adcox and told him, “I want to have a teddy bear drive.”
Little did she know that fellow Southwest member Pam Herring, whose daughter Paige, 12, died in the 1998 shooting, also had contacted Adcox.
The two women joined forces and rallied their church family, collecting more than 6,000 teddy bears to send to Connecticut.
They dubbed the project “Project Teddy Bear Love.”
“Most (of the teddy bears) were tied with a card or note of some sort,” Cremeens said, “and every single one had been hugged on and loved on and sent ready to bring healing and comfort to those in Newtown.”