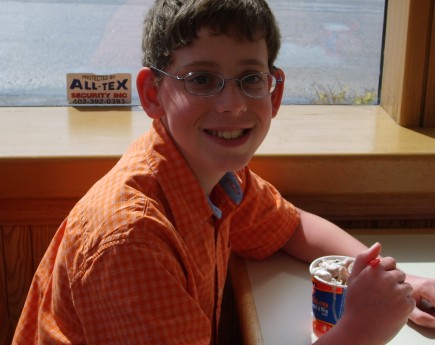 Tears and prayers: Scout’s death latest in string of tragedies

Bobby Ross Jr. and Tamie Ross
At age 13, Sam Thomsen already had developed a gift for preaching.
As his youth minister recalls, the teen crafted a lesson about his Old Testament namesake — Samuel — and the way he listened to God throughout his life.
“Nothing could describe Sam better than that,” Franklin Wood, youth minister at the Southwest church in Omaha, Neb., wrote in an online tribute.
Sam and three other Boy Scouts were killed June 11 when a tornado sliced through a primitive Scout camp in westernmost Iowa, 40 miles north of Omaha.
“There are very few 13-year-old boys in the world you can call sweet,” said Carol Copeland, a Southwest member and friend of the family, “and Sam was one of those. It’s very disheartening.”
When tragedy strikes a Church of Christ, the ripples of grief and heartbreak wash across the close-knit fellowship.
In recent weeks, however, the ripples have seemed more like a tidal wave — of tears, prayers and stunned disbelief.
Sam’s death marked the latest in a string of tragedies involving congregations nationwide.
Michigan church elder Dan Tarjeft and his wife, Jennifer, were riding their motorcycle with friends.
John Robert Dobbs, a Mississippi high school senior and church worship leader, was headed home from a night out.
In Kansas, Bible school teachers Gary and Kimberly Whitlow were going to see a 2-month-old nephew for the first time.
But in an instant, all lost their lives — victims of a drunken driver, a wrong turn and a tornado. Tears flow as loved ones struggle to understand the tragedies.
“God works in mysterious ways that at times are too big for us,” said Alicia Tarjeft, 19, whose parents died. “I hope and pray that God will use this tragedy to bring others to Christ.”
HE LOVED SCOUTING, HUSKERS — AND JESUS
Nearly 700 people gathered at the Southwest church June 13 to honor the memory of Sam, son of longtime members Larry and Sharon Thomsen.
Afterward, the church youth wrote notes to Sam, tied them to balloons and released them outside.
Sam was adopted as an infant through the Nebraska Christian Services agency sponsored by the congregation — a source of pride for the family and church.Sam and his sisters, Lindsay and Sara, were home-schooled.
Besides Scouting, Sam loved the Nebraska Cornhuskers and sharing Jesus with his friends, minister Jim White said.
The teen delivered his sermon on Samuel after Leadership Training for Christ this past spring.
“I was so impressed,” White said. “Sam and I kidded around a lot, but he had a much more spiritual side that was amazing to watch develop.”
Sam died when a tornado destroyed a building where a group of Scouts had taken shelter, authorities said.
Injured were dozens of the 93 Scouts who had gone to the elite camp to learn how to be leaders.
Until the wee hours of the next morning, Sam’s parents held out hope that he would be one of the injured — and not among the dead, the youth minister wrote on his personal Web site.
“Sam was like everyone’s little brother,” Wood wrote. “He loved the Huskers (which resulted in many good-natured arguments between him and our Razorback preacher!).
“Sam had a never-ceasing smile plastered to his face EVERY DAY! I’m beginning to wonder if he ever had a serious moment in his life! Even while he practiced sermon delivery for LTC, all I had to do was crack a smile and he couldn’t resist smiling back!”
‘WE NEED EACH OTHER MORE THAN EVER’
White described the congregation of around 300 as a tight community made up of many longtime members.
“In a state where there are only 42, 43 Churches of Christ, we really feel each other’s pain very deeply,” he said. “Larry and Sharon have a house full of people right now loving them and Christians across the state praying for them.”
Copeland said the storm also did extensive damage — most of it from large, prolonged hail — to the Nebraska Youth Camp in Hastings. “Not only are our youth hurting because of Sam’s death, but every single one of them goes each year” to Nebraska Youth Camp, she said. “We lost Sam, and a place where our youth are able to be together has been seriously damaged.”
But as was the case two years ago when 16-year-old Southwest member Sarah Neal was found shot to death in her home, the congregation will emerge stronger, Copeland said.
“When you’ve been together as long as many of us have, you go through a lot — good and bad times,” Copeland said. “We need each other more than ever right now.”
Kent Barnett, executive director of Churches of Christ for Scouting in Abilene, Texas, offered condolences to Sam’s family and noted that a disaster relief fund has been set up.
Across the nation, 500 Churches of Christ sponsor Scout troops, Barnett said.
“These congregations should be a real resource for Scouts — a shoulder to lean on — for children having trouble making sense of this,” he said. “Of course, so much of what this church/troop connection does is outreach oriented, so this is a real opportunity for members to minister to these kids now.”
Like the Nebraska church, other grief-stricken congregations made a simple request of their extended Christian family.
“Our whole congregation can use all the prayers we can get,” said Darlene Gardner, a longtime member at the Gateway church in Southgate, Mich., where the Tarjefts worshiped.