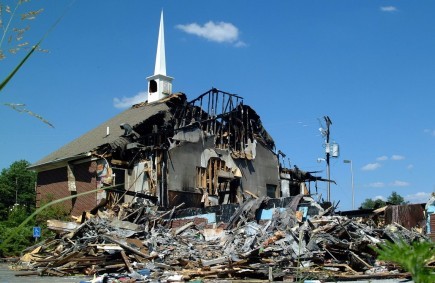 Ted Parks
BOWLING GREEN, Ky. — Fires in two rural communities in the Bowling Green area destroyed two Church of Christ buildings eight miles apart.
Authorities said they determined at least one church fire to be arson and took into custody a person of interest in both cases.
Flames gutted the building of the Mount Pleasant church Aug. 13. Two days later, a fire destroyed the Mount Zion church house. Built in 1852, Mount Zion was the oldest house of worship still in use among Churches of Christ in Kentucky, elder and former minister David Eadens said.
Kentucky State Police arrested Wallace Michael Gaddis, 56, as a person of interest in the fires, the Bowling Green Daily News reported. Gaddis was suspected of making a threatening phone call to a minister, said Detective Sgt. Tommy Smith. While the second fire was ruled arson, the cause of the first remained under investigation.
Both churches were insured, but ministers at each said rebuilding likely would cost more than the covered damages. The congregations still were assessing the specific financial losses at press time.
On Sunday, Aug. 17, the Mount Pleasant church gathered at Richardsville Elementary School, while Mount Zion members met in the Richardsville Community Center, a quick walk from the school.
Leaders and members from both congregations expressed loss, hope and the need for faithful action.
“This is something that has affected our children in a profound way,” Mount Pleasant minister W. Tom Hall told the congregation as members fanned themselves in the stuffy school gym. “Reassure your children today that God is still on the throne, Jesus is still sitting at the right hand of God.”
He turned the tragedy into a call to action, saving points from his morning sermon for Sunday night in order to directly address the congregation’s suffering.
In the wake of the week’s unexpected tragedy, Hall urged members not to put off their personal Bible study, stewardship and faithfulness to the church.
“Do it now,” he urged.
“It hits where it really hurts,” Paul Pruett, 84, a lifelong member of the Mount Pleasant church, said as he and his wife, Christabelle, walked through the rubble of their building that Sunday afternoon.
“We’ll build it back,” said Christabelle Pruett. “We’ve just lost the building. … We haven’t lost our members yet. We’ll be back.”
Mount Zion minister Gary Hays and his wife, Greta, felt loss not only for his congregation, but also for Mount Pleasant.
The minister said he grew up at the neighboring congregation and had family there. “It’s kind of been a double hit for us,” Greta Hays explained.
For elder Eadens, whose family has worshiped at Mount Zion for six generations, the burned structure was more than just a church house.
“We certainly understand the difference between the building and a church,” Eadens said. “Still, it’s more than just a building to us, with that kind of history.
“This is a contest between good and evil,” Eadens added. “Jesus had to experience that in the wilderness, and we’re called to sometimes experience tribulations of life. … If we’ll remain faithful, we’ll prevail.”
To contribute to fire relief, see www.mtzioncoc.com and www.mtpleasantcoc.org.