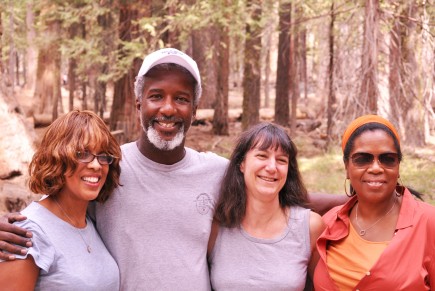 Bobby Ross Jr.
Talk show queen Oprah Winfrey doesn’t make it out to the woods too often.
For a recent special, though, Winfrey and friend Gayle King hitched a pop-up camper to a Chevrolet Tahoe hybrid and hit the road to Yosemite National Park.
The purpose of Winfrey’s adventure: to meet Shelton Johnson, a black park ranger who complained that few African-Americans visit America’s national parks.
While exploring Yosemite, Winfrey ran into Woody Square, who has served since 1992 as youth and family minister for the San Leandro Church of Christ in California. Square is black.
“Hi, where are y’all from?” Winfrey asked Square and his wife, Judy.
“Guess why we’re here?” King chimed in. “Because we were told black people don’t normally come to the forest. And we go, ‘There’s a black man!’”
“Surprise!” Square replied with a laugh. “I’m the first one here.”

The Squares, who were visiting Yosemite with friends from Australia, posed for photos with Winfrey and couldn’t stop talking about the encounter.

“It was totally surreal,” said Woody Square, who earned an associate’s degree from York College in Nebraska, a bachelor’s in Bible from Harding University in Searcy, Ark., and a master’s in ministry from Pepperdine University in Malibu, Calif.

“The fact that we met her was amazing,” said Judy Square, who served with her husband for six years as missionaries to Papua New Guinea.

A week later, an “Oprah” producer called and invited the Squares to fly to Chicago and appear on the show. The producer said the show would take care of everything — flights, chauffeurs, accommodations and all tips.

During the taping, the Squares chatted briefly with Winfrey. Near the end of the show, the host again smiled at them.

“Woody, it seems like camping just brings you so much joy, right?” Winfrey said to Square, who visits Yosemite yearly. “So, come on up here, guys.”

As the Squares stood next to her, Winfrey said, “So, I would have to say that I thoroughly enjoyed my trip to Yosemite, and everybody should get there at least once in their lifetime, don’t you think?

“So, I won’t be going anytime soon. So, I want to give you guys the keys to my Coleman camper. And, because you guys have been so great, you need something to pull it with. So, I’m throwing in the Chevy hybrid Tahoe.”

Woody Square leaned his head back in surprise.

His wife put her hands over her face.

Winfrey didn’t know it, but the Squares’ 11-year-old Toyota Camry has 220,000-plus miles on it. They were hoping to make it last another two years.

“We really felt it was a God thing that brought us there at the right time at the right place,” Judy Square said of crossing paths with Winfrey.