Reflections on covering the deadly tornadoes in Middle Tennessee.

MT. JULIET, Tenn. —  I don’t know if God or guilt prompted me to take the Interstate 40 exit to Mt. Juliet.

Just after 6 p.m. on the Sunday after tornadoes cut a swath of destruction through Middle Tennessee, I was driving a rental car toward my hotel by the Nashville International Airport.

I had spent more than 24 hours in Cookeville — 80 miles east of Nashville — reporting on the faith-based disaster relief effort and the lives lost by eight people with ties to Churches of Christ.

I felt drained, both physically and mentally. 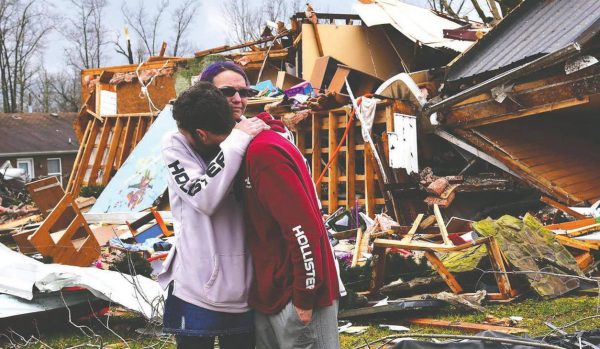 On Saturday afternoon, I had toured the disaster zone and talked to fellow Christians who lost homes.

Then Sunday morning, I had started the Lord’s Day at the Collegeside Church of Christ. That congregation near Tennessee Tech University lost two of its own in the storm: 4-year-old Hattie Jo Collins and 67-year-old Patricia Ann Lane.

Hugs and tears were plentiful before — and even during — the assembly.

After leaving Collegeside, I caught the end of the worship assembly of the Double Springs Church of Christ near some of the worst destruction.

Preacher Eric Collins spoke with a choked voice about the difficult week his congregation and entire community had endured.

Related: After tornado, a teen serves her community while grieving her 4-year-old friend

“It’s been really emotional,” Collins told me after the service. “Our members losing their homes, losing everything — it’s family. These aren’t just strangers you see on the news.” 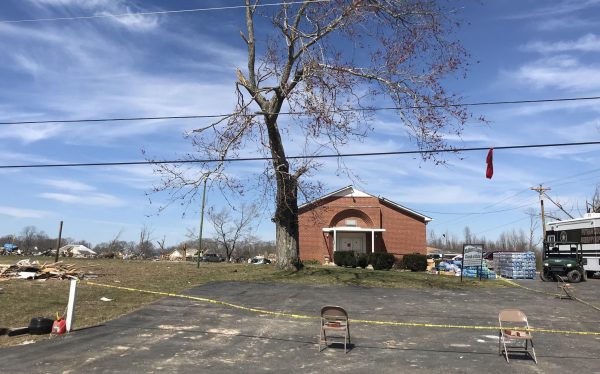 A mobile command vehicle of the Putnam County Sheriff’s Office is parked beside the damaged McBroom Chapel Church of Christ building in a hard-hit neighborhood of Cookeville, Tenn.

By 2:30 p.m., I arrived at the Crest Lawn Funeral Home. Cars already were parking on the grass. A long line of mourners stretched down the sidewalk.

The service for Josh and Erin Kimberlin and their 2-year-old son, Sawyer, wasn’t scheduled to begin for half an hour. It would end up starting 40 minutes late. The Kimberlins were devoted members of the Colonial Heights Church of Christ.

I didn’t leave Cookeville until about 5 p.m.

While making plans for this trip, I had contemplated visiting the Mt. Juliet Church of Christ, about 65 miles away, because I knew many Christians were working hard on relief work closer to Nashville. But since more lives were lost farther east, I had focused my time and attention there.

I also had checked and determined that the Mt. Juliet congregation’s Sunday evening service started at 5. Now it would be over by the time I got there.

But when I saw the exit sign, I made the split-second decision to push up my turn signal. Even if the assembly was over, maybe somebody would still be there. A few miles down the road, past mounds of tornado debris, I discovered a full parking lot at the Mt. Juliet church. It was 6:15 p.m.

“One homeowner told me, ‘At a time when I’ve lost everything, I’ve not had to worry about anything.’”

I opened a side door with a “Volunteers Enter Here” sign on it.

I asked a woman in the foyer if the service was still going. She explained that the congregation had delayed worship an hour to give folks more daylight to devote to relief projects.

Inside the auditorium, Brian Oldham, a Mt. Juliet member who had spent the week leading chainsaw crews, was talking about how hard people work when they’re laboring for the Lord.

“One homeowner told me, ‘At a time when I’ve lost everything, I’ve not had to worry about anything,’” Oldham said.

Here's an update about what we can provide at our distribution center:March 9th-14th, 10am-1pm & 5pm-7pm1940 N Mt. Juliet RdPlease view our website for most updated information: mtjuliet.org/mjrelief

The Mt. Juliet church had invited about 25 households affected by the storm to the assembly that night.

The congregation prayed for individual families by name. And members had a special meal prepared for afterward.

The 109 Church of Christ, a church plant of the Mt. Juliet congregation, provided the food. After the meal, the organizers planned to shower each family with gift cards for dinner and a movie, so they could have a night out together.

At the end of the Mt. Juliet service, a teen came forward to be baptized.

While waiting for her immersion, we sang “There’s Not a Friend Like the Lowly Jesus,” “Thank You, Lord,” “Nothing But the Blood” and “Jesus Loves Me.”

The words touched my soul.

My exhaustion gave way to hope.

I had seen a lot of ruin these past two days. But the faith and resiliency of Christians working hard to help friends and neighbors had inspired me.

As I drove the rest of the way to my hotel, I found myself rejuvenated — and in awe of the enormity of the God we serve.