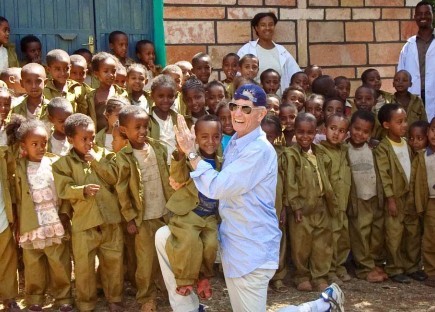 Sudan’s bloody civil war, between the Muslim north and Christian and animist south, raged for 22 years, claiming more than 2 million lives and displacing 4 million people.
Nearly four years after the peace treaty that ended the war, the Southern Sudanese are returning to their homes — many with only the clothes on their backs. Some, baptized in refugee camps in Uganda, Kenya and Ethiopia, are establishing Churches of Christ.
Don Humphrey and DeWayne “Grif” Griffin of the Mount Juliet, Tenn., church visited six young congregations during a recent trip to Southern Sudan, which has an autonomous government under the terms of the 2005 treaty.
John Ed Clark, a longtime missionary in Ethiopia and an elder of the Woodward Park church in Fresno, Calif., and Joseph Smith of Nashville, Tenn.-based Healing Hands International accompanied them, along with Sudanese ministers Isaya Jackson and Kennedy Shurama.
Large crowds listened patiently to the team at each congregation they visited.
But “of all these churches, only two can be considered mature,” Jackson said. “Their immaturity is only because they are currently not being taught.”
To help meet the demand for preachers and teachers, the 1,000-member Mount Juliet church oversees The Sudan Project. One of the mission’s goals is to launch a ministry training school in the Southern Sudan town of Magwi.
Roger Talanyi, a Ugandan-born minister, and his family are completing their studies at Sunset International Bible Institute in Lubbock, Texas. The family plans to move to Sudan and work with the new school. Christians also plan to build a church building and kindergarten on the school’s property.
Workers with Healing Hands International have surveyed the region’s water wells, many of which were damaged during the long war, and seek funds to make repairs.
Northwest of Magwi, in the Southern Sudan town of Bor, the Kongor Christian Bible School is under construction.
The school is a project of Brothers Organization for Relief, overseen by the Swope Parkway church in Kansas City, Mo. John Gak, a native of Bor, founded the organization.
After the school is completed, church members plan to construct a meeting facility. The organization seeks additional funds for construction materials and the donation of — or funds to purchase — a dump truck.
“We have truly been blessed by God in that the Southern Sudanese government gave us the land to build our school and church,” Gak said.
“Although some progress has been made, much more still needs to be done,” he added.
Missionaries in Mbale, Uganda, also are working with a ministry training school and church-planting efforts in the Southern Sudan city of Nimule, just north of the Uganda border.
Body and Spirit Missions, another church-supported organization, seeks funds to educate young Sudanese men and women studying at Uganda Christian University, a private university in Mukono, Uganda, founded by the Anglican Church. Dr. Mike Smith, head of the university’s department of health sciences, oversees the organization.
Humphrey — and many of his fellow church members working in Sudan — stressed the need for U.S. churches to take advantage of the current opportunities afforded by the Southern Sudanese government.
“Right now the door is wide open,” Humphrey said. “That will not last forever.”
HOW TO HELP:
THE SUDAN PROJECT: www.sudan-project.org; (615) 470.5032.
HEALING HANDS INTERNATIONAL: www.hhi.org; (615) 832-2000.