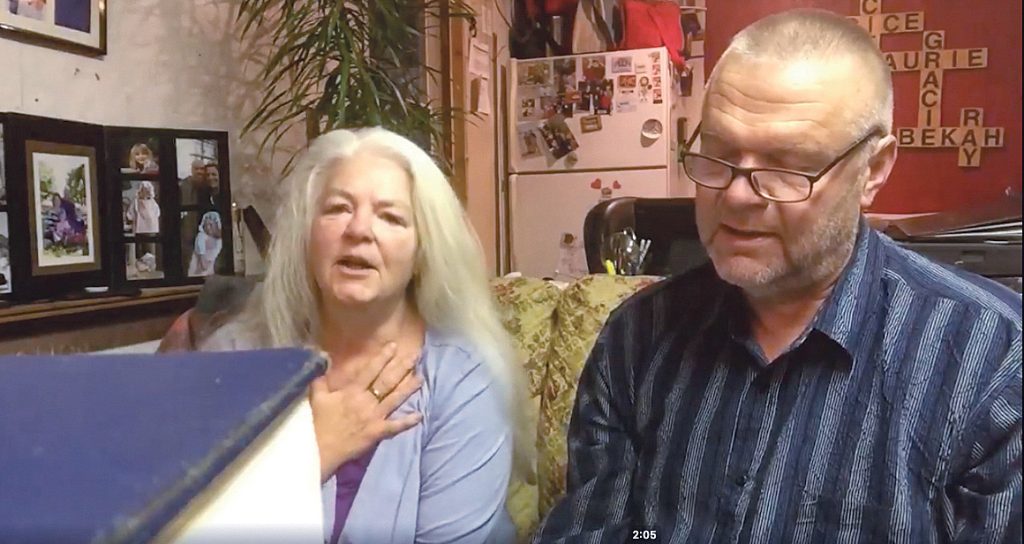 International
During a “song of the day” broadcast for church members in Nova Scotia, Laurie and Ray Fisher sing “Listen to Our Hearts.”
Print
Share:

Standing together while apart

In Nova Scotia, Churches of Christ are ‘small in number but mighty in spirit.’ Now they mourn after the worst mass shooting in Canada’s modern history.

It’s the kind of tragedy “you hear about in the news from faraway places,” said Darren Boehner.

But the deadliest rampage in Canada’s history happened at places he knows. And among its 22 victims are names and faces he and his fellow Christians recognize.

“I did not want to believe what I was hearing. I remember thinking, ‘This is pure evil. Things like this don’t happen in rural Nova Scotia.’”

Boehner is ministry leader for the Mill Village Church of Christ, a 30-member congregation that meets in the Canadian province of Nova Scotia, about 250 miles east of the U.S. state of Maine.

On Sunday, April 19, after church members worshiped in their homes due to the COVID-19 pandemic, many learned of the 13-hour crime spree that began the night before.

A man impersonating a police officer shot and killed victims inside and outside their homes and set multiple fires. Several victims died while trying to escape the flames or help other victims. Three of the deaths happened in Shubenacadie, about two miles from Mill Village.

Our hearts go out to everyone affected by the shooting in Nova Scotia. To the Portapique community, we’re keeping all of you in our thoughts. And on behalf of all Canadians, I want you to know that we’re here for you – and we’ll be here for you in the days and weeks ahead.

The rampage ended in the town of Enfield when the shooter was killed by the Royal Canadian Mounted Police at the Irving Big Stop, where minister Ray Fisher has fueled up many times.

“It could have been me or someone I love,” Fisher said. “I did not want to believe what I was hearing. I remember thinking, ‘This is pure evil. Things like this don’t happen in rural Nova Scotia.’

‘A HEART FOR THE MARITIMES’

Three Churches of Christ worship among the 970,000 souls of Nova Scotia, the most populous of Canada’s three Maritime Provinces, known for its candy-striped lighthouses, rustic fishing villages and majestic red cliffs.

In 1855, minister Donald Crawford planted the Mill Village church in the province’s dairy farming country. Years later another Church of Christ was planted in the capital, Halifax, and that church planted another in the town of Kentville. In the 1950s evangelists including J.C. Bailey, David Lidbury and Bruce Tetreau worked with the congregations.

Fisher and his wife, Laurie, are natives of Maryland who moved to Canada 22 years ago. They have served churches across the nation, with names such as Salmon Arm, Moose Mountain and Ice Lake. Now they split their time between Mill Village and Kentville, which has about 20 members, with occasional visits to the Halifax church, which has about 30 members.

“In general, the congregations are small in number but mighty in spirit,” Ray Fisher said.

Laurie Fisher added, “God has placed us in a most wondrous land and with a heart for the Maritimes.”

‘WEEP WITH THOSE WHO WEEP’

Canada’s social-distancing guidelines make it difficult for the people of Nova Scotia to mourn together, Ray Fisher said.

Still, he’s encouraged by what he sees — “hearts in windows, standing together (while apart) at the ends of driveways or on balconies, and the songs and music and the prayers.

“I am still grieving and will be for some time,” he added. Meanwhile, he and his fellow Christians “weep with those who weep, and we know that Jesus himself wept when he saw the pain of family members who had suffered a loss.”

He recently concluded a series on “Promises of God,” which he began during in-person church services and concluded online. He discussed God’s assurances to his people: “I will be with you, I will protect you, I will be your strength; I will give you peace.”

“I’d like to think God laid that series on my heart as a way to prepare us for what unfolded on April 18-19,” he said. “We are Nova Scotia strong, and for those of us in Christ, we have an anchor.”

For three decades, Ray Holmes worshiped with the Pitman Road…