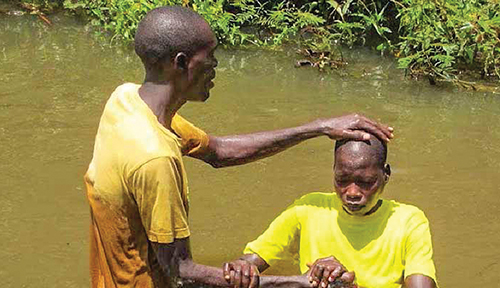 Staff Reports
GAMBELLA, Ethiopia — Christians tossed rocks in the river to scare away crocodiles as they prepared for baptisms in an East African refugee camp in this Ethiopian town, not far from South Sudan.

Though the crocs stayed away, the arrival of a 3-foot-long poisonous snake cut the service short.

Don Humphrey, director of The Sudan Project, a mission outreach of the Mt. Juliet Church of Christ in Tennessee, traveled to Gambella, in western Ethiopia. He met with evangelists working in refugee camps there. In addition to ministry training and a health clinic in South Sudan, the ministry supports 16 South Sudanese preachers working in four refugee camps in Ethiopia and Uganda.

Though Sudan’s decades-long civil war ended with the creation of South Sudan in 2011, ongoing violence in the new country prevents many refugees from returning. A congregation of about 150 souls meets in one of the camps, Humphrey said.

In another camp, a young church has experienced about 50 baptisms — despite the risks from reptiles.

The refugees also face crowded, unsanitary conditions and a lack of food and water, Humphrey said.

“However, for the Sudanese refugees in Ethiopia and Uganda, a great blessing is coming out of their current exile,” he said. “They are hearing the Bible for the first time, becoming Christians and changing their eternities.”