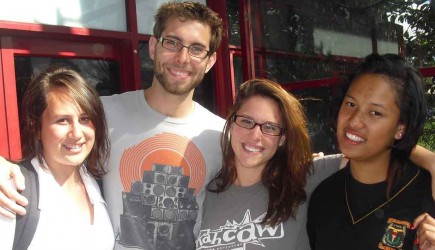 Erik Tryggestad
After school, about three-dozen teens visit the “Icebox.”
That term used to refer to wooden home appliances that held large chunks of ice to keep food cool. The British — and New Zealanders — still use it to refer to modern freezers.
But for members of the Discover Church of Christ in Auckland, New Zealand, “Icebox” is a ministry. Each Tuesday and Thursday, teenagers gather to play games, eat a snack and hang out with missionaries and mission interns.
Many of the teens “are latch-key kids and live in a culture of drinking and drugs,” said Alan Phillips, associate director of Texas-based Missions Resource Network. “Each Tuesday night, about a dozen of these teens meet together to learn about God.”
Local community leaders give the program free rental of its facility and have “noted improvement in mischievous after-school activity” because of the church’s work, Phillips said.
Phillips and coworker Jay Jarboe visited Auckland recently to conduct a workshop for a church-planting team. The team — Justin and Jennifer Cherry, Skylar and Morgan Ely and Elijah and Kristen Peters — arrived in 2008 and established the Discover church in the western suburbs of the city.
Missions Resource Network and Lubbock, Texas-based Sunset International Bible Institute trained the team.
Two families from the Georgetown, Texas, Church of Christ — Paul and Melanie Partlow and John and Tiffany Sanders — plan to join the team this year.