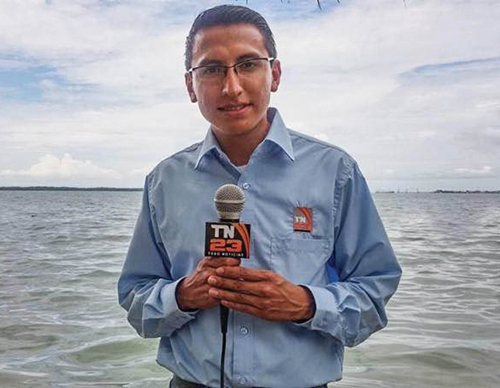 Staff Reports
GUATEMALA CITY — In this Central American capital, where poverty, wide income disparity and violent crime are daily concerns, Julio Hernandez sees his job as a television news reporter as a means of serving his country — and his God.

“By way of microphone and cameras,” Hernandez said, “one can send messages to the public so that they cease their delinquency and instead grow in love among their fellow countrymen, as well as love towards foreigners.”

Hernandez, a reporter for TN23 Guatemala, is an active member of the Zona 11 Church of Christ.

He struggled to earn his university degree and often barely had enough money to take the bus to class. He received a Sherma Scholarship through Health Talents International, a medical mission associated with Churches of Christ, and was able to complete his communications degree at University of San Carlos.

As he covers government meetings and news conferences, Hernandez seeks to be “an example to the next generation — and to my work colleagues — regarding how God lives within my heart,” he said in an interview with Health Talents, translated from Spanish by Julie Obregon.

He also wants to use his talents to help his congregation grow, nuture its children and organize large events to reach out to its community.