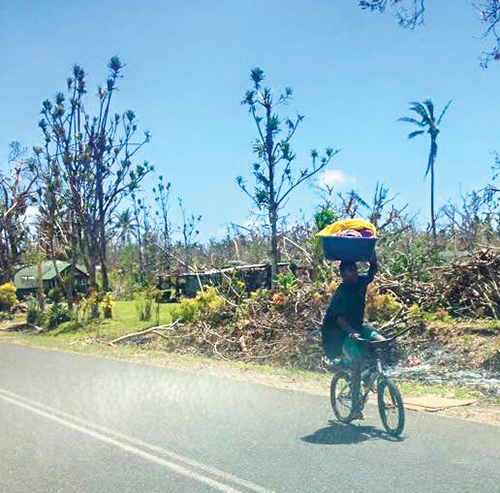 Spotlight: Devastation in the South Pacific

Staff Reports
PORT VILA, Vanuatu — Missionaries ask for prayers and support as they assess damage and begin the long process of rebuilding in this South Pacific nation.

The nation of 267,000 souls, spread across more than 65 islands northeast of Australia, sustained a direct hit from Cyclone Pam, which claimed lives and destroyed or damaged at least 90 percent of the buildings in Port Vila, the capital.
“For over 24 hours, it sounded like a freight train and had the impact of a tornado,” said Tobey Huff, a longtime missionary in the South Pacific who was building a ministry training school in Vanuatu. “It will take at least six months for most of Vanuatu to be somewhat self-sufficient again.  They lost all their gardens, coconut trees … and many more fruit trees.”
Eric and Shawnda Brandell, members of a mission team in Vanuatu, housed at least 15 church members from a nearby village after the storm destroyed their homes.
The couple is coordinating relief efforts. Healing Hands International, a church-supported relief ministry, is collecting funds for water filters.
Randy English, a missionary based in American Samoa, also is assisting in relief efforts.