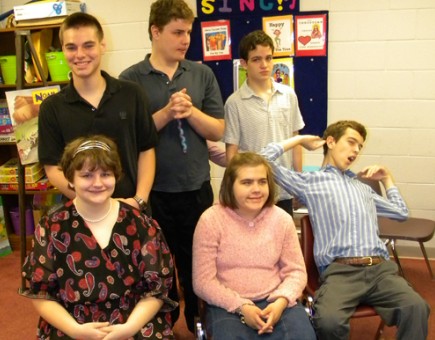 Bobby Ross Jr.
Editor-in-Chief
RALEIGH, N.C. — “People are going to heaven because of Melissa. She has been quite evangelistic.”
Tears well up in elder Ed Woodhouse’s eyes as he describes what his 18-year-old granddaughter has meant to the Brooks Avenue Church of Christ, a 450-member congregation just blocks from North Carolina State University.
Born with Smith-Magenis syndrome, a rare developmental disorder characterized by mental retardation, speech problems, sleep disruptions and hyperactivity, Melissa Woodhouse hasn’t taught the plan of salvation to anyone herself.
But 10 years ago, she inspired the creation of a ministry for children with special needs at the Brooks Avenue church.
It’s a ministry that has met a huge need in North Carolina’s capital city and led entire families to Jesus, church leaders say.

“We wanted the parents to be able to worship in peace, to know that their children were well cared for,” said Paula Woodhouse, Melissa’s mother, who with her husband, Barry, started the ministry in 2000.

Like Melissa, about 10 million boys and girls nationwide — 14 percentof all children — have a special need such as cerebral palsy, Down syndrome and a broad range of disorders called autism, according to the U.S. Department of Health and Human Services.

Few churches provide services for such children. Some churches even ask parents to keep them away, as Seth and Claire McElvaney can attest.

The McElvaneys are the parents of Anika, 15, and Ethan, 12, who have high-functioning autism, and Olivia, 14, who has Asperger’s syndrome.

The church they attended when the children were diagnosed was less than supportive.

“Anika would get very excited … and do this whooping that a lot of children with autism do,” Claire McElvaney said. “And I had people going, ‘Can you not bring her?’”

Eventually, the McElvaneys quit the church.

“When your child gets diagnosed, you start to feel like, ‘Why is God punishing me through my child? What did I do that was so bad?’ And we had it three times over,” said Claire McElvaney, talking through tears. “Our own church didn’t want us. We felt like we had been rejected by God.

After years away from church, the McElvaneys heard about an annual spring carnival for children with special needs at the Brooks Avenue church.

The special-needs ministry began the carnival as an outreach. It relies on 100 church volunteers and draws up to 700 children and parents.
In ways, it’s like any carnival — with popcorn, cotton candy and snowcones, bounce houses, puppet shows and special guests ranging from the Wolfpack mascot to the Easter bunny.
But it’s different too: No one stares or makes a big deal if a child has a meltdown.
“The purpose of this carnival is to allow these families to really, truly have just a fun experience — for them to see the love of Jesus in our volunteers,” Paula Woodhouse said.
Impressed by the carnival, Claire McElvaney, who grew up Episcopalian, urged her husband, who had a Roman Catholic background, to scope out the Church of Christ.
Like Joshua, he brought back a positive report from the Promised Land.
Still, the family’s first Sunday proved nerve-racking.
“I was scared to death. We sat up in the balcony trying to stay away in case something happened,” Claire McElvaney said. “And Anika, oh dear …turned around in the middle of the sermon and said, ‘I’m bored,’ and I wanted to cry right then.
“And the woman right in front of me said, ‘So am I. Do you want something to draw with?’ And I think I cried all afternoon. So we went back again and again and again.”
The couple studied with Ed Woodhouse and decided to be baptized.
“We kind of talk about it like it saved our lives,” Claire McElvaney said.
“In many ways, it did,” added Seth McElvaney, who immersed his daughter Olivia into Christ on a recent Sunday.
A KISS FROM GOD
At a previous church, Jennifer Russo would find her autistic son Robbie, 7, alone in a corner after class.
“Well, it’s not like he’d understand anyway,” his mother recalled a teacher telling her.
But after the family began visiting Brooks Avenue a few months ago, Robbie asked to pray at dinner, she said. Later, while jumping on his family’s trampoline, the boy said, “Oh, I felt a breeze. That must be God giving us a kiss.”
“It really feels like a family,” said Jennifer Russo, who, along with her husband, Frank, is studying with Ed Woodhouse. “They really, genuinely care about you.”
In the beginning, the ministry focused on respite care. As long as children were safe and parents could worship without worry, organizers were happy.
But then ministry leaders decided God had called them to a higher purpose: exposing children with special needs to Jesus.
“I actually have been caught so many times underestimating these kids, but they have shown me over and over that they are capable of so much more,” ministry coordinator Melinda Oldham said.
Take Melissa Woodhouse, for example. Friendly and outgoing, she makes sure a Christian Chronicle reporter greets “Blessing,” a paid caregiver who helps lighten the load of her parents and sisters, Morgan, 13, and Maggie, 11.
Church elder David Mills teaches special education part time at N.C.State. Mills shared the story of his son George, who is moderately retarded and came to live with him at age 5.
George, now 42, was in his early 20s when he asked to be baptized. When his father asked him why, George opened his Bible to Acts 2:38 and said, “For the same reason Peter told these people to.”
Because of their intellectual deficits, Mills said, his concern is not the salvation of children with special needs. “But I realize that God wants their praise and devotion,” he said. “Sometimes, it’s much purer than what we give.”
“Oh, it’s beautiful,” agreed Paula Woodhouse.
This is the Bible, God’s written word. It tells how God loves us. It tells how God made us. This is the Bible, God’s written word.

About 20 young people with special needs, ranging in age from 6 to 22, sang along with teacher Suzan Rouse on a recent Sunday morning. The children meet together during Bible class, then divide into younger and older groups during worship.
“So today, we’re going to have a Bible story about a man that God took care of,” Rouse told the children. “Does anybody remember what his name was?”
“Noah!” Melissa and the others yelled.
“And what came on the ark?”
“Animals!”