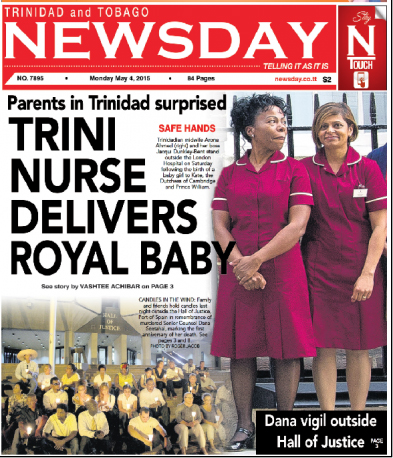 'God does things beyond our imagination,' minister Kenneth Mohammed says of his daughter's role in the births of Prince George and Princess Charlotte.

Newsday, a periodical in Trinidad and Tobago, reports that one of the midwives who assisted in the birth of Princess Charlotte in London is a native of the Caribbean nation, just north of Venezuela.

The midwife, Arona Ahmed, is the daughter of Kenneth Mohammed, minister for the Point Fortin Church of Christ on the island of Trinidad, and his wife, Ena.

Ahmed moved to England when she was 17 to study nursing. She previously assisted in the birth of Prince George, the first child of Prince William and Kate Middleton, the Duke and Duchess of Cambridge. Ahmed’s family in Trinidad was unaware of her role in the prince’s birth until they saw news footage on CNN of her walking out of St. Mary’s Hospital in London behind the royal couple.

A confidentiality agreement restricts her from talking about her role in the births, Newsday reports.

That agreement, evidently, does not extend to her father.

Speaking after services at the church building in Point Fortin yesterday, Arona’s parents said they were overjoyed at the role played by their daughter in the royal birth. An obviously pleased (Kenneth) Mohammed said. “We never expected that, as a nurse, she would one day deliver the royal baby.

“God does things beyond our imagination,” the proud father said.

Her mother, Ena described her as a “loving and caring person.” She said her childhood dream was to become a nurse to take care of people.

Prayers were offered for Arona earlier at the church services, thanking God for the success of the delivery and for her continued well-being. Several church members expressed surprise that their “own Rona” was involved in the delivery of the royal birth. Another member expressed the view that it is important to “train your children well as you never know what role they would be called upon to play in life.”

The Point Fortin Church of Christ is an active, vibrant congregation, said Michael Stewart, a church member in Scarborough, Tobago, who serves as a general secretary for Churches of Christ in Trinidad and Tobago.

Stewart also serves on the regional committee for the Caribbean Lectureship, an annual gathering of members of Churches of Christ across the region. The 45th lectureship is scheduled for July 12-15 on the island of St. Thomas, one of the U.S. Virgin Islands.