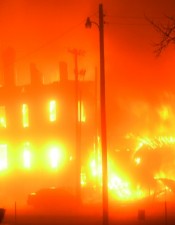 Martin was driving back into Terrell early Sunday morning. “I could see the flames in the air,” she said.

SWCC student Paris Washington had just gone to bed when a friend banged on the door, telling her to look out her window.

“At that time it was just a small fire on the left side of the building and in the back,” Washington said.

But within a few minutes, the flames spread at the building located at 200 Bowser St.

“At this point we don’t know what caused the fire,” said Terrell Fire Chief Jim Harper.

The fire reportedly destroyed hundreds of boxes of records being stored in a drained Olympic-sized swimming pool of the administration building.
“These things are still smoldering,” said Lynnette Nadeau, Terrell public information officer, on Monday.
Many students watched as flames shot from the roof of the building, said Penny Howie, who accompanied her firefighter husband to the scene. She said she heard a series of explosions while there.
“[The students] were concerned about their academic future,” said Kristopher Crigler, who is a former SWCC student. “It was completely devastating.”
The college staff was in the process of getting ready to move to a new administration building under construction. The three-story brick structure housed the administrative offices, several classrooms and an auditorium.
Natesha Wyrick Cathey, president of Southwestern Christian College’s national alumni association, was among those who stood on the perimeter Sunday evening. She said she was “totally taken aback by the horrific site.”
“While this is a devastating moment in the history of our beloved school, I certainly believe that it can serve as a defining moment,” Cathey said in an e-mail.
No one was hurt, and the fire was contained to the immediate area, officials said. But the financial and sentimental losses continued to be felt by former and current students.
Among them was the newly renovated Ben Foster Jr. Memorial Auditorium, which comprised most of the second floor of the administration building, Cathey said.
“Countless hours of labor and thousands of dollars were spent restoring (it) to its former glory in honor of a very special student,” she said. “Having seen it with my own eyes, I can assure you that it is a shockingly overwhelming site.”
Chronicle online editor Tamie Ross contributed to this report.