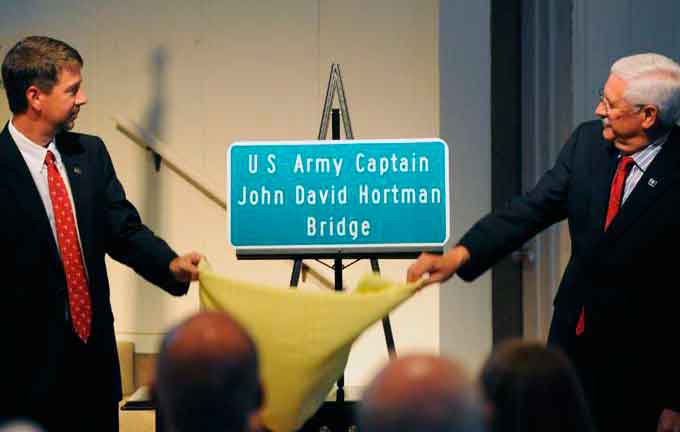 Spartanburg, S.C., county council member Roger Nutt helps unveil a sign for a bridge on Highway 296 crossing the Middle Tyger River. The bridge will be dedicated to John David Hortman. (Photo by John Byrum, via www.goupstate.com)

If U.S. Army Capt. John David Hortman were alive to see a Spartanburg County bridge named in his honor, he would have likely said, “That’s pretty cool.”
County Councilman Roger Nutt’s comment drew laughs during a dedication ceremony at Hortman’s church, Central Church of Christ, on Wednesday. The Highway 296 bridge over the Middle Tyger River has been named in memory of Hortman, who died Aug. 8, 2011, in a helicopter training exercise at Fort Benning, Ga.
“Tonight, we’re here for a celebration,” said Nutt, who attends church with Hortman’s family and traveled with Hortman as part of the church’s singing group when Hortman was younger. “Let’s not forget that. Do you hear that laughter? That’s what David would want. He’d say, ‘I’ve got a bridge? That’s pretty cool.’ He probably wanted a space shuttle, but the county’s resources are limited.” 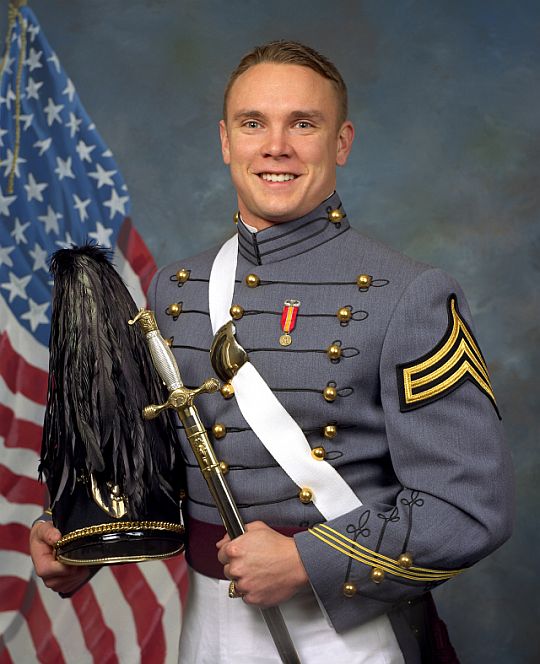 Read the full story.
Hortman, 30, was a 2004 graduate of the United States Military Academy at West Point.
GoUpstate.com published Hotman’s obituary and a story about his funeral service. During the service, his longtime friend, Stan Fields, read a letter given to him by Hortman before Hortman’s first deployment in 2008.
“I died doing exactly what I wanted to do, what God put me on this earth to do,” Fields said, quoting the letter.
The letter listed songs Hortman wanted played during his service, including “I’ll Fly Away,” “It is Well With My Soul” and “Where No One Stands Alone.”