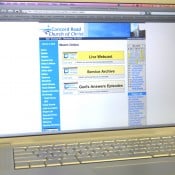 Snowed in, members take a seat at home, log on to ‘online church.’

Bobby Ross Jr.
Stuck at home after a snowstorm, youth minister Paddy Flanagan could not make it to a recent Sunday morning assembly.
However, that did not keep him from joining fellow members of the Concord Road Church of Christ in Brentwood, Tenn., in praising God.
Flanagan logged on to the church’s Web site and watched live streaming of the singing, prayers and sermon.
“It was obviously a little different watching services from home,” he said. “I was sitting in the floor and my wife in the computer chair. I also missed being there in person but did feel a little more part of the group knowing that what I was seeing was happening right then.”
That same Sunday, the Wilkesboro, N.C., church, where Dale Isom serves as an elder, canceled services because of hazardous driving conditions.
Isom and his wife, Michelle, planned at first to have a short Bible study, share communion and call it “church,” he said.
But after a friend mentioned the idea of online worship, he decided to “visit” the Prestoncrest Church of Christ in Dallas.
“Our first mistake was to show up for church an hour early,” Isom said, noting the time difference between North Carolina and Texas. “
“That gave us an extra hour to get ready,” he said. “We prepared our communion and took our seats. When the time did come, the screen came to life with songs for us to join in and sing. … We enjoyed an excellent lesson and took part in a meaningful communion service with a congregation hundreds of miles away.”
Amid technological advances, a growing number of congregations nationwide use live streaming to make the Sunday assembly available — as it happens — to shut-ins, out-of-town members and other interested guests.
Church leaders interviewed by The Christian Chronicle see the potential both for tremendous blessings and unexpected pitfalls from “online church.”
“I think there are problems associated with being able to worship online,” said Charlie Harrison, minister of the Brunswick, Maine, church. “These problems are no different from deciding to attend a ballgame or auto race and not attending worship but having’mini-worship’ in the van or camper so you can be at the track or stadium.
“I guess I view this like I do some medical procedures,” Harrison added. “Just because we can do it does not answer the moral and ethical questions. We are left to grapple with those issues individually and in our congregations.”

That congregation is considering live streaming for invalids and the occasional ill regular attendee, Linscomb said.

“Our greatest fear about streaming, however, is that people will take this as a substitute for coming to the assembly,” he said.

Neither Flanagan nor Isom plan to make a habit out of online worship.

Isom expressed his gratefulness to the Prestoncrest church for making its service available “for just such an occasion.”

“It was nice to have the option of joining a church family when that snow is coming down and the roads are dangerous,” he said.

In Flanagan’s case, only about one-third of the congregation made it to the Concord Road assembly that Sunday.

Many — like Flanagan — chose the Internet option, and the Web server had trouble supporting all the viewers. “The video seemed a little choppy, but the audio worked fine most of the time,” he said.

If unable to worship with his church family, Flanagan said he’d prefer a small gathering of family and friends to a cyber-service.

But he likes the advancements technology has allowed.

“As far as podcasts go, I am an avid runner, and I often listen to sermons while running,” he said. “I can get between three and seven sermons in a week that way, depending on the preacher. I would rather listen to a sermon than music. Music eventually gets boring, but sermons keep your mind engaged while running.”

“We have two or three (podcasts) we download regularly and listen to when we have the time,” Emerson said. “It’s enriched our lives tremendously, and we are incredibly thankful for this and other technologies we have available to us.”

Across most parts of Africa, he said, being a missionary is not as logistically and physically difficult as it once was.

“These days, the villagers have cell phones, city dwellers have iPhones and we Skype with our families and download sermons on a high-speed wireless connection,” he said. “What a world!”

In an interview with The Christian Chronicle, Dwell co-founder Joshua…