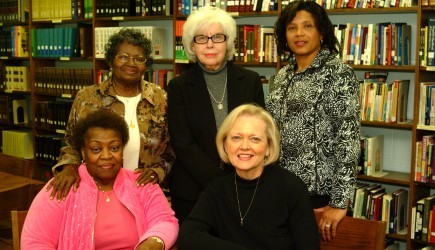 ‘Small something’ aims to break barriers

Ted Parks
NASHVILLE, Tenn. — One Saturday this fall, Donelson church member Annette McRay’s brunch menu included egg casserole, a frozen lemon salad, homemade muffins, a fruit platter and coffee.
But what she really served her guests that morning was the love of Christ — and what she wanted them to savor was not just food, but also the taste of diversity.
The brunch was the first in a series of events in which women from the predominantly white Donelson church, near Nashville, began reaching out to the women at Nashville’s predominantly black Schrader Lane church.
McRay’s brunch idea grew out of her longing to experience the kind of ethnic diversity in Nashville that she had enjoyed in the Chicago area, where she and her husband attended the Naperville, Ill., church, a congregation with more than 20 ethnic groups.
Invited to participate in the women’s ministry at Donelson after moving to Tennessee last spring, McRay proposed the meal. Her suggestion came as the ministry’s leaders were talking about the need for diversity in the church.
Donelson women’s leader Carole Purkey singled out the influence on the group of The Christian Chronicle’s recent articles on the 2007 Crusade for Christ in Tampa, Fla., a biennial event traditionally involving black congregations. A Chronicle column about how race continues to divide the church helped motivate the Donelson women to do “some small something,” Purkey said.
With McRay having met members of Schrader Lane during her time in Illinois, the Donelson women got in touch with their sisters across town.
The brunch was just the start. After the meal in McRay’s home, a group from Donelson visited the Sunday women’s class at Schrader Lane. While there, the Donelson women invited all their Schrader Lane sisters to a tea. Some 120 guests, half of them from the predominantly black church, attended the event several weeks later.
Their relationship growing, the women from the two congregations plan to eat lunch together in December and are discussing a joint service project. But the initial meeting of the two groups in McRay’s home allowed the Donelson and Schrader Lane women to start building ties.
“The agenda was that we were fellowshipping together, getting to know one another,” said Cleo Bell, a women’s class teacher at Schrader Lane. “You have to get to know people, and we just let it all hang out, so to speak, and just said what was on our hearts that had been bottled up.”
Paulette Thompson, who teaches the women’s class with Bell, shared with the Chronicle a memory typifying the hurtful attitudes of the past.
Thompson recalled visiting a prominent white congregation in Nashville with some Nigerian students as a teenager. Meeting Thompson and her friends at the door, a church member let the group enter but made it a point to remind them where the black churches were.
“How could you not have … some scars?” Thompson asked.
As the Donelson and Schrader Lane women talked, they concluded that their focus must be on the present and the opportunities they face now, Bell said.
“We had no control over what happened in the past,” Bell said. “But I am responsible for what happens now in my generation. And that’s what we all came to.”
For McRay, the continued division between white and black churches has a lot to do with clinging too dearly to personal comfort. “We are so afraid to get out of our comfort zones,” she said. “We so often encourage each other and our young people to go abroad for missions. … But we’re afraid to go across town.”
“I think people go where they feel comfortable going,” Thompson echoed. “They go … where history has led them to go,” she said. “Somebody has to do something to break those barriers.”