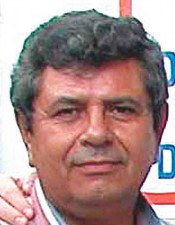 Erik Tryggestad
One year ago, Antonio Lara was gunned down in the doorway of a church where he served as minister.
Christians in El Salvador have continued Lara’s work and baptized 80 people across this Central American nation in the past year, said Paul Newhouse, a member of the High Pointe Church of Christ in McKinney, Texas.
Newhouse and High Pointe’s minister, James Nored, accompanied a team of church members to El Salvador recently to survey ministries supported by the congregation.
Sixto Rivera, a native Salvadoran, accompanied the group and served as translator. Rivera helps plant Spanish-speaking churches in the U.S. with the Texas-based Genesis Alliance.
The team visited a program for needy children and several ministers planting churches in communities near San Miguel.
Rivera later visited the High Pointe church and praised the congregation’s commitment to his homeland.
“As I stood in front of the congregation … I saw the affirmation of the people,” Rivera said. “Their faces were saying ‘Amen’ to the work.”
Nored added, “It was a great day and a great celebration of what God has done.”
SEE A VIDEO of the work in El Salvador at www.missionaloutreachnetwork.com.