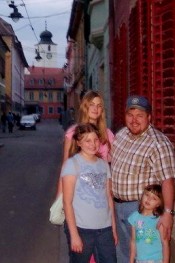 Erik Tryggestad
Fans of Bram Stoker’s “Dracula” might be surprised — and a bit disappointed — by a visit to Sibiu, Romania.
Located in the heart of Transylvania, the city of about 160,000 souls is relatively free of bats, coffins and fog, said Lee Skelton. Nestled among picturesque mountains, the city’s majestic cathedrals date back to the 1300s.
Skelton (not “skeleton”), his wife, Stephanie, and their four children — Elizabeth, Hannah, Jacob and Sarah — moved to Sibiu in June to work with a small congregation. The Ovilla, Texas church oversees the work.
“When it comes to Dracula, (Romanians) actually view him in quite a different way than Americans do,” Skelton said.
Stoker’s 1897 novel was inspired by Vlad III, who ruled southern Romania in the mid-1400s. Romanians credit Vlad with stopping the advance of the Ottoman Empire across Europe. During his rule, “It was said you could place a golden apple in the square and no one would touch it,” Skelton said.
The reason, according to German manuscripts, was Vlad’s cruelty. One account alleges that the monarch impaled 10,000 of his enemies on long stakes and displayed them along the streets of Sibiu. Russian and Romanian accounts of Vlad’s life paint a much kinder picture of the ruler.
The Skeltons haven’t had much time to ponder Dracula since they arrived in Romania. They’ve helped the Sibiu church host a Vacation Bible School and launch a campaign through World English Institute, a ministry that teaches English using the Bible.
But the family occasionally has opportunities to explore the country’s infamous past. During a survey trip a few years ago, the Skeltons toured Bran Castle, better known as “Dracula’s castle,” the former home of Vlad III. During the visit Jacob Skelton got separated from the group.
“I jokingly quipped at the time, ‘Oh great! Of all the places to misplace my son — it had to be in Dracula’s castle!’” Skelton said.
“All joking aside, Romania is a beautiful country with people who need Jesus,” he said. “My family and I are glad to be in Sibiu, working with the local Christians to build up the body of Christ.”
FOR MORE INFORMATION, see www.romaniamissions.info.