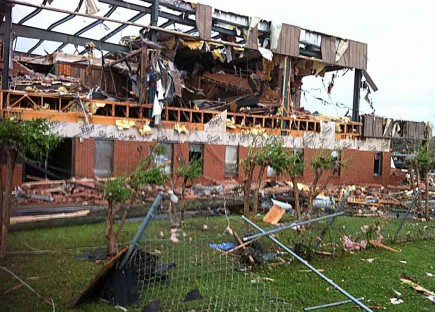 Bobby Ross Jr.
Moments before Wednesday’s tornado obliterated the Central Church of Christ building in Tuscaloosa, Ala., six students huddled in a small cinderblock closet at the church.

Carl Naylor started to pray, but he managed just two words before the twister came.
“By the time he said ‘Dear Lord,’ our ears started popping, and hairs stood up on your arms,” said Caleb Durden, a member of the Central church. “Glass was hitting us in the head. Debris. We had glass and rust and just pieces of metal in our hair.”
The students — all active with the Tide 4 Christ campus ministry — couldn’t hear anything as the storm drowned out the heavenly plea of Naylor, whose home congregation is the Forrest Park Church of Christ in Valdosta, Ga.
“The old saying is, ‘A tornado sounds like a freight train,’” said Andrew Broadfoot, who calls the Beltline Church of Christ in Decatur, Ala., home. “Well, it almost sounded like 10 freight trains. We were lucky that that room held.”
After about 15 to 20 seconds, the noise quieted.
The students — who also included Kyle Henderson and Caleb Bradford, from the Austinville Church of Christ in Decatur, Ala., and Justin Miller, from the Wetumpka Church of Christ in Alabama — opened the closet door.
Broadfoot said he looked to the left, where the church’s family life center used to be.
“It was completely destroyed,” he said, “and that’s when we realized how bad it was.”
Said Durden: “Where walls were, they were no more. There was a roof in one guy’s car. Windows were all busted out. It was unbelievable.”
The Central church building and its Tide 4 Christ student center are — or were — about a mile south of the University of Alabama campus. Membership, including campus ministry students, totals about 300. The campus ministry serves students from Stillman College and Shelton State Community College as well as the University of Alabama.
Tuscaloosa was among the hardest-hit communities by a swath of tornadoes that killed 329 people across six states, the nation’s deadliest tornado outbreak since the Great Depression.
Trae Durden, Caleb’s brother and the Central campus minister, lives about 15 minutes from the church building with his wife Leann and two children, Darcy, 8, and Dalton, 5. He had rushed home to be with them when the storm hit.
An end-of-year party had been planned at the student center that night, but it was canceled because of weather concerns. The six students there were doing homework, practicing music or just hanging out. Trae Durden said he texted them right before the tornado to warn them to take cover in the closet at the church.
“They went through a lot,” Trae Durden said of the students. “They said it was like sandpaper. The roof did crack. They had wind coming in there.. … They’re all real red and scratched up. They didn’t (get) cut terribly bad. They didn’t get injured. One of them had a nail in his foot. That’s the worst of it.
“It was a close call. It was bad,” he added. “I wish they had gone in there (the closet) earlier. You just never know about these things. You don’t know what’s going to get hit.”
In the wake of the tornado, the Central church building appears to be a total loss, he said.
“There are a few cinderblock walls still standing,” he said of the building. “The room where they were is still standing. But everything looks like spaghetti. It’s just all twisted up. It’s ridiculous. Lots of debris.”
But the campus minister said neither he nor Central’s elders are worried about the building. It’ll be bulldozed and rebuilt, he said.
The big concern right now, Trae Durden said, is helping the hurting, distraught tornado victims in Tuscaloosa and elsewhere.
Campus ministry students and Central church members — with help from Churches of Christ from near and far — are working to feed tornado victims and provide bottled water.
Mike Baumgartner with Disaster Assistance CoC, a feeding ministry overseen by the Lake Jackson Church of Christ in Texas, arrived Thursday night and started cooking.
“We will be serving food from 10 a.m. to 3 p.m. in the church parking lot,” Baumgartner said.
The Central church is accepting donations for rebuilding and benevolence needs related to the tornado. Donations can be sent to the church. Find the address on the church website.
“A group of us loaded up an SUV yesterday (Thursday) and took food around, and water,” Caleb Durden said. “The people were so thankful. The sad thing is, these children running around. You know, they don’t have a home around. A lot of people are just dazed. You walk around and see people just sitting there. They don’t know what to do.”
Kaysie Durden Routh, a member of the Hazlehurst Church of Christ in Georgia, is Trae and Caleb’s sister.
She’s been communicating with her brothers from her home in Uvalda, Ga.
“They are my little brothers, but they are strong men of God,” Routh said in an e-mail to The Christian Chronicle.
“They are very concerned about the people who live in the homes surrounding the church building,” she said of her brothers. “Many of the homes are destroyed, and some of the people have not been located yet.”
Routh offered this additional message for fellow Christians: ““My brothers and other church members have been trying to help the people of the neighborhood today. Please continue to pray for the efforts of the rescue and recovery teams. We are very thankful to God that (my brothers) were spared, but there are other families who are hurting now and some who do not know if their loved ones are OK or not.”

Do you know of members killed or injured — or church buildings damaged or destroyed — in the tornadoes? Do you have photos that you’d like to share? Please leave comments with detailed information.