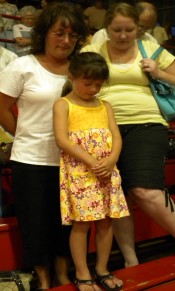 PARKERSBURG, W.Va.— The heat was on.

That’s what happens when you take 90-degree temperatures, on-fire-for-the-Lord church members and a 1950s-era high school field house with no air-conditioning — and put them all together.
Hundreds of hand fans fluttered, volunteers passed out ice-cold bottled water and sweat-drenched Christians wiped their foreheads with towels as the makeshift congregation assembled in this industrial, working-class city of 32,000 souls.
Thirteen Churches of Christ in West Virginia, Ohio and Tennessee supported the recent “Christ Is The Answer” door-knocking campaign and gospel meeting, working alongside volunteers from We Care Ministries, Sojourners, the “In Search of the Lord’s Way” television ministry and Ohio Valley University.
“The Mid-Ohio Valley churches have not had this type of cooperation and attendance since the 1960s,” said Alan Stephens, one of the campaign organizers.

Nightly crowds from 650 to 1,200 endured sweltering conditions as they sang hymns such as “Hold to God’s Unchanging Hand” and heard passionate sermons on the need for everyone to accept Jesus Christ as savior and be baptized.
“We’re not in the condemning business,” preacher Phil Sanders told a crowd seated on folding chairs and wooden bleachers beneath giant rafters. “We’re in the saving business.”
Nearly 250 campaign workers from 13 states knocked every door in Parkersburg and nearby communities — 24,447 in all, said Robert Reed, a deacon for the North End Church of Christ in Parkersburg.
The campaigners ranged from 11-year-old North End members Camille Jones and Rebecca Haguewood to 89-year-old Syble West, the legally blind mother of We Care Ministries director Larry West.
“We just went around and knocked on the doors and just invited them to come,” said Rebecca, who was baptized at age 8. “Most of them were really friendly.”
Said Camille, who was baptized at age 9: “It wasn’t as hard as I thought it would be. It was actually a good experience for me.”
Syble West, a member of the Jackson Street Church of Christ in Monroe, La., knocked doors in the morning and afternoon.
“That’s like living and breathing for her to be out there sharing the Gospel,” said Reggie Gardner, a We Care volunteer and member of the Linder Road Church of Christ in Meridian, Idaho.

REVIVING OHIO VALLEY CHURCHES
This Ohio River city has lost thousands of industrial jobs and seen its population decline by roughly 30 percent since the 1960s.
Like the community as a whole, area Churches of Christ have dealt — in many cases — with shrinking numbers.
The idea for a citywide campaign to revive area churches and share the Gospel came from Stephens, a deacon for the Concord Road Church of Christ in Brentwood, Tenn.
The Parkersburg native was 9 years old when he attended a 1967 gospel meeting by prominent evangelist Jimmy Allen at the same field house.
But Stephens — and many longtime Parkersburg church members — never forgot that experience or the impact the campaign made.
On the last night of Allen’s eight-day meeting in 1967, 3,300 people filled the gymnasium.
“I remember the field house was packed,” said Doreen Kupfner, 56, a North End member.
At age 13, Kupfner was among 98 people baptized that week. Dozens more rededicated their lives to Jesus, according to an August 1967 news story in The Christian Chronicle.
This time, Sanders, a speaker for the Edmond, Okla.-based “Search” program, preached for four nights.
Chris Walker — grandson of Jordanaires singer Ray Walker and a student at Lipscomb University in Tennessee — led a cappella singing. Joe Wells, editor of Kaio, a Focus Press publication, tackled youth issues.
Fourteen new souls were added to Christ — some in a special baptismal tank built by church members Mark Shockey and Richard Engor and filled with 1,100 gallons of water.
“It made all the sweat and sawdust and everything worth it,” Shockey said.
Months before the campaign, organizers began running a television commercial on NBC affiliate WTAP, Parkersburg’s only local station.
The “Search” program, featuring Bible studies by Mack Lyon and Sanders and singing by the Edmond Church of Christ, airs each Sunday on that station.
In the 30-second ad, which appeared 578 times, Sanders let viewers know that church members would be coming to their doors.
“The reasoning is, you don’t want it to be a cold knock on the door,” said Ken Long, WTAP’s local sales manager and a North End member.
Besides the North End and Concord Road churches, participating congregations included the Camden Avenue church in Parkersburg; the Grand Central church in Vienna, W.Va.; the Hopewell church in rural Wood County, W.Va.; the Lubeck church in Washington, W.Va.; and the Rockport, W.Va., church.
Others were the Rosemar church in Parkersburg; the 36th Street church in Vienna; the New Matamoras, Ohio, church; the Barlow-Vincent church in Vincent, Ohio; the Belpre, Ohio, church; and the Mount Juliet, Tenn., church.
“I wonder if the best thing that won’t come from this … is just the tremendous cooperation of the churches,” said Terry Garner, a 36th Street church elder.
Said Ron Riddle, a Camden Avenue church elder: “We’ve witnessed the church come together and people get up and want to work together. It’s strengthened the brotherhood.”

DOORS OPENED TO BIBLE STUDY
For North End members Ray and Karen Hoover, the 1967 meeting was memorable in more ways than one: It’s where they went on their first date.
Both recall that the field house was packed, but they’re quick to point out that times were different.
“Everybody went to church back then, you know?” Karen Hoover said
Crowds averaged more than 2,500 per night at the 1967 event.
This time, the meeting drew an average of 970 people.
“The numbers were excellent, considering the declines in the population and membership at some churches,” said Stephens, who hopes the Parkersburg approach can become a prototype for campaigns in other cities.
“Remember, 90-degree temperatures without air-conditioning were a challenge, and we still had two nights with over 1,100 people,” he added.
Besides the dozen-plus baptisms, numerous contacts were made, Stephens said.
“Hundreds of Bible studies are ongoing,” he said.
The campaign came on the heels of the 11th annual Mid-Ohio Valley Work Camp organized by Churches of Christ.
About 450 teenagers from 14 states gathered in Parkersburg to paint the homes of needy residents.
“I heard people say, ‘Hey, that renewed my faith in the teenagers of America today,’” said Garner, the 36th Street elder. “So now, that’s coupled with this, where we went to the doors and we didn’t use high pressure. We just said, ‘Hey, we’re concerned about your souls.’
“I just can’t believe that we won’t see ramifications from this and a groundswell over the next few months and even years.”