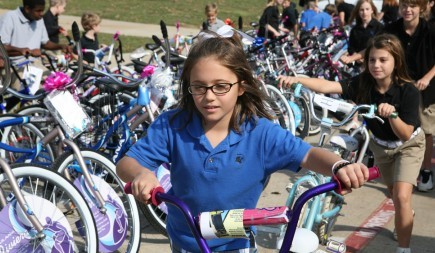 ‘Shouts, clapping and jumping for joy’

Joy McMillon
When Logan Brock wakes up Christmas morning, the Dallas Christian School senior doesn’t expect to find any presents under her Christmas tree. Neither do her three sisters, nor their parents. Rather than buy gifts for themselves, the Brock family used their Christmas money to purchase bicycles and supplies for children in Ghana, West Africa.
“We’ve never had a happier Christmas,” Logan said. “We had so much fun going on a shopping spree together as a family, knowing we were helping someone else.”
All five members of the family took the name of a boy or girl and outfitted the child with a bicycle, supplies and clothing.
The Brocks are part of a student-led, schoolwide Christmas project at Dallas Christian School, a 50-year-old college preparatory school in Mesquite, Texas.
Students collected more than 300 bicycles for students and teachers at the Ateiku Church of Christ International School, according to Martha Leeson, a Dallas Christian instructor and the senior class sponsor.
They met their goal of 328 bicycles — the total number of instructors and students at Ateiku.
“This has become an unbelievable community event,” Leeson said. “Every time we turn around somebody is doing something to help.”
Companies have offered discounts, and other companies have donated clothing or supplies. “Our kids have bought out all the yellow and bright blue colored fabric in Wal-Mart to send to Ghana for children’s school uniforms to be sewn,” Leeson added.
Impressed by the students’ enthusiastic efforts, others joined in the spirit of giving.
Dallas Christian president Terry Harlow donated an older school bus to the African school. Another family has volunteered to put the bus into working condition instead of buying each other Christmas presents. A washing machine has also been donated to the school.
“These kids are so pumped,” said Neil Plunkett, a Dallas Christian parent and owner of RSI Crating and Packaging, who offered to ship anything that the kids collected for free. He expects to ship the goods shortly, and they should arrive about a month later, Plunkett said.
Meanwhile, instructors would like to raise $8,000 to cover the cost of shipping the bus, said Barbara Luster, a Dallas Christian librarian.
Students became interested in helping the private school when Leeson, a member of the Saturn Road church in Garland, Texas, encouraged the senior class to choose something for their annual project that would make a difference.
Leeson — along with her son, James, Luster and Sheryl Hamilton, Dallas Christian academic advisor — spent two weeks last summer working at the 2-year-old African elementary school, where they learned there was no transportation for the children. The vans that had been used to take the children to and from their villages had broken down.
“Transportation is one of the major problems of our country,” Lawrence Oduro, the school’s director and minister of the Ateiku church, wrote in an e-mail to The Christian Chronicle.
Many of the students walk up to 12 miles per day to go to school, so the bikes will make quite a difference, Oduro said. He is sponsored by the Saturn Road church and the Greenville Avenue church in Richardson, Texas.
“We are quite elated at the joyful news of the shipment of the bicycles and the bus,” Oduro wrote. “You can’t imagine the shouts, clapping and jumping for joy by both pupils and staff of the school when they were informed of it.”
It’s hard to know who’s more thrilled — those who are giving or those receiving.
“It’s really had an impact on us,” said Beverly Cawler, president of Dallas Christian’s student body and a Saturn Road member. “It has made me and all my friends realize how we can make a real difference in the world, at such a young age.”