FAIRFAX, Va. — As the Fairfax Church of Christ stood to sing “From The Inside Out” on a recent Sunday, Lori Windham stepped forward to interpret the hymn for deaf members.

Windham, a 42-year-old wife, mother and attorney, learned American Sign Language so she could help with the suburban Washington, D.C., congregation’s deaf ministry.

“Maybe because of her background as an attorney, she’s so good with language. She’s a smart lady, very humble.”

“Really, her speed of learning was incredible,” said Cindi Cesone, a Fairfax elder’s wife who — like her husband, Dennis — was born deaf. “Maybe because of her background as an attorney, she’s so good with language. She’s a smart lady, very humble.”

Windham’s deep faith can be seen not only in her active church involvement but also in her high-profile work at religious liberty law firm Becket. 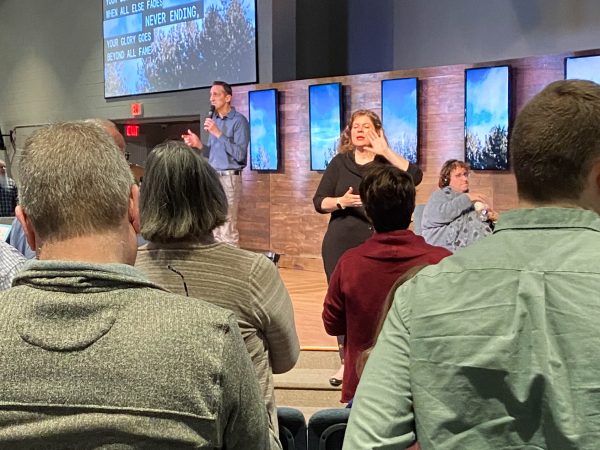 Lori Windham serves as an American Sign Language interpreter at the Fairfax Church of Christ in Virginia.

A senior counsel at Becket, Windham has represented clients in religious freedom lawsuits since 2005 — including serving as the lead attorney for plaintiffs in Fulton v. Philadelphia.

The Fulton case, which Windham argued before the U.S. Supreme Court (albeit via telephone because of the COVID-19 pandemic), concerned whether the City of Philadelphia could refuse to certify a Catholic foster care agency unless the charity agreed to place foster children with same-sex married couples.

In an interview after worship at Fairfax, Windham remembered quickly scrolling through the June 17, 2021, decision — more than 100 pages long — and trying to figure out who won.

“I was like, ‘This doesn’t look right,’” she told The Christian Chronicle. “I was looking for dissent, and there was no dissent because it was unanimous.

“And that was just — after three years of fighting this case — it was just an incredible moment to know that we’d won, and we’d won convincingly.”

Windham’s Supreme Court victory marked the latest — and most significant — career milestone for the Texas native.

Earlier, she was a part of Becket’s legal team in Burwell v. Hobby Lobby Stores. In that 2014 case, the court ruled 5-4 that closely held companies — including those owned by a family with religious convictions — cannot be required to pay to cover some types of contraceptives for their employees.

More recently, Windham filed a friend-of-the-court brief in support of a Washington state high school football coach who wants to kneel on the field for postgame prayer. Justices will hear his case soon.

Becket characterizes its mission as protecting “the expression of all faiths, from A to Z — Anglican to Zoroastrian.” The firm counts eight Supreme Court wins in the past decade.

“All the Supreme Court victories would not exist without her,” Alvarado said of Windham. “She’s been here for every one of them.” 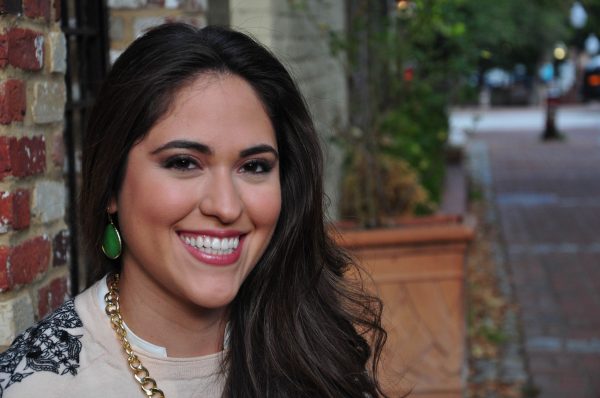 ‘Driven in her belief’

Windham grew up in the Northside Church of Christ, a San Antonio congregation where her parents — Allen and Glenda Halstead — remain as founding members.

Her parents instilled in her at an early age a deep appreciation for religious freedom.

They taught her, Windham said, “that this is how we protect how we believe and how we pass things down to our children. 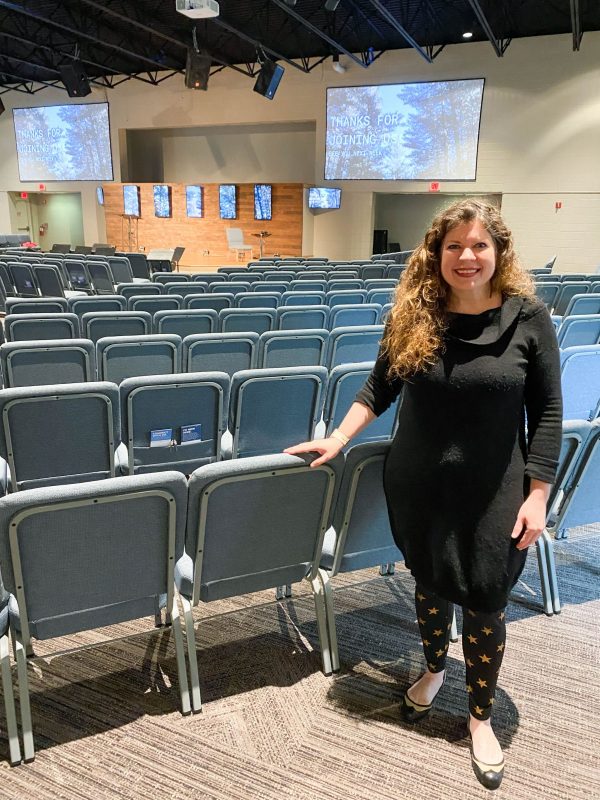 Lori Windham attends the Fairfax Church of Christ in Virginia.

A 1997 graduate of a Christian high school, Windham earned a scholarship to attend Abilene Christian University, a West Texas university associated with Churches of Christ. She majored in political science.

“Lori has always been driven in her belief that religious freedom is foundational for the U.S.,” Coates said.

Concerning the unanimous decision in Fulton, the professor said, “There are very few attorneys who have earned that honor. … But all she was trying to do was what is right in the eyes of God. We are proud of her accomplishments.” 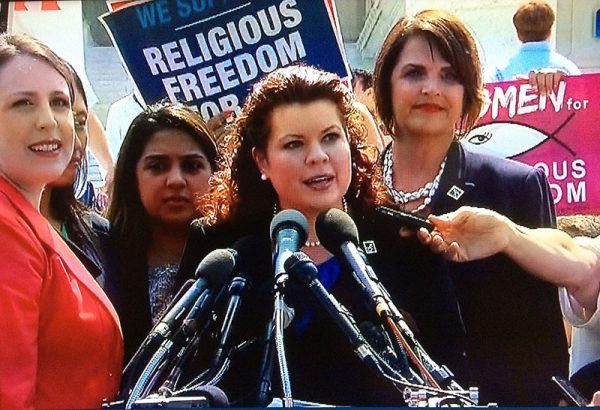 ‘A gift coming from ACU’

At the elite institution, which she attended from 2002 to 2005, she discovered that not all her classmates had wrestled with the First Amendment’s free exercise clause like she had.

“That was like a gift coming from ACU,” she said of her undergraduate preparation.

“I think what was unusual was that so many people there identified with a religion, but it was more like a cultural thing.”

Attending a non-Christian school for the first time was an adjustment, as well.

“I think what was unusual was that so many people there identified with a religion, but it was more like a cultural thing,” Windham said of her Harvard classmates. “They were kind of puzzled to meet people for whom their faith made a big difference in their life and was part of thinking about how you live.

“And so I remember,” she added, “actually having really good conversations with some of my fellow students who were Orthodox Jewish or who were Muslim because they understood this idea that my faith makes a difference.”

Those conversations helped impress upon her the importance of protecting religious freedom for everyone — not just those who share her beliefs, she said.

For that reason, Windham has advocated in cases ranging from a Muslim inmate who sued for the right to wear a beard to a Santeria priest prohibited from making animal sacrifices to Jewish synagogues kept from building on their own land.

“The American way of doing things,” Windham told the Chronicle, “is realizing that we have people with a lot of different beliefs, but we can protect everybody and let them search for truth and hope they find the real truth. That’s the best way to do it.” 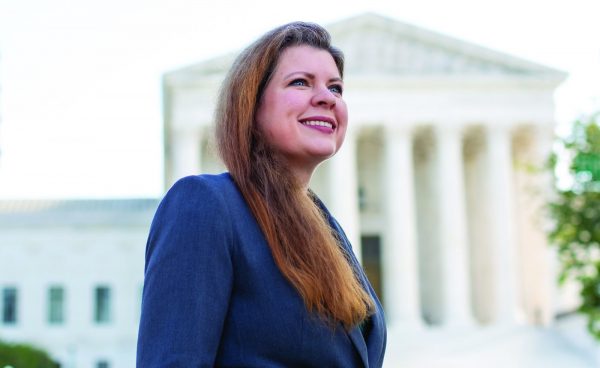 Between her law school years, Windham worked in the nation’s capital — for the U.S. Justice Department’s civil rights division one summer and Becket’s founder, Kevin J. “Seamus” Hasson, the other summer.

After she finished Harvard, both former employers offered her a job.

“I gave it a lot of thought and a lot of prayer, and I thought, ‘The federal government is always going to be there; I can do that some other time,’” she said. “I decided, ‘I’m really interested in religious liberty work; I want to do that for this part of my career and see where it takes me.’ And it’s been a lot of fun, so I’ve never stopped doing that.”

“I thought, ‘The federal government is always going to be there; I can do that some other time.’ I decided, ‘I’m really interested in religious liberty work.’”

While in Washington during her intern summers, Windham got her first introduction to the Fairfax church.

A friend from ACU had told her about the congregation, and she decided to check it out.

She immediately found a home away from home.

“I had a place to go and to make friends,” she said.

While studying to take the bar exam, she joined a Fairfax group on a service project at a children’s home. During that project, she met her future husband, Matt Windham, who has a master’s degree in mathematics and works in data analytics.

They exchanged wedding vows 15 years ago, and Fairfax has remained their church home.

“Lori is amazing,” said Phil McKinney, the church’s lead and discipleship minister. “It’s not just the fact that she’s a lawyer and has had these huge cases, but she is just incredibly involved in ministry here.

“Whenever we need help with anything, she’s always there,” he added. “It’s just her spirit. And you know she takes that into the courtroom on behalf of the people she represents.”

“Lori is amazing. It’s not just the fact that she’s a lawyer and has had these huge cases, but she is just incredibly involved in ministry here.”

Windham does her best to deflect the attention.

Asked about learning sign language, she replied, “I’m not nearly as adept as I should be.”

But she’s happy to praise her fellow Christians, commending the Fairfax church’s diversity and the congregation’s ability to maintain close-knit fellowship in a transitory, spread-out community.

“It’s unusual because there are so many people who are in D.C. for a short period of time, so people come through here and come and bring their gifts to the congregation. And then they move on and go somewhere else,” she said. “This congregation is great at welcoming people … and understanding people are going to come and go.”

For her part, Windham has no plans to rent a U-Haul anytime soon.

She loves her church, her job and her life in the Beltway.