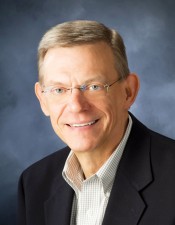 STAFF REPORTS
ROCHESTER HILLS, Mich. — Rubel Shelly will step down as president of Rochester College in 2013.
The college, which is associated with Churches of Christ, has launched a national search for Shelly’s successor.
William Anderson, chairman of the board for the college once known as Michigan Christian, said the target date for announcing a new president is this spring.
In Shelly’s five years at the helm, enrollment has increased from 850 students to more than 1,200 students. For 27 years, Shelly served as pulpit minister of the Woodmont Hills Church of Christ in Nashville, Tenn. When he left in 2005, he joined Rochester’s religion faculty part time, voicing a desire to help prepare future preachers. He became a full-time professor the next year.
But in 2008, trustees asked Shelly to fill a much larger role, tapping him as president when the former head, Mike Westerfield, resigned. Shelly, 67, intends to assume the role of chancellor, oversee the transition of leadership and “return to his most cherished roles of teacher-author within the college community,” according to a news release.