Chris Seidman loves to study God’s word — and to preach it. He is an avid student of Scripture, and his sermons reflect the same. 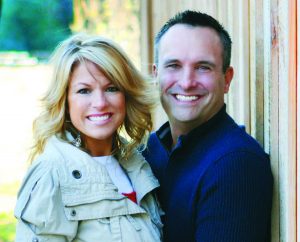 Chris and Tara Seidman have served souls in Texas and Florida for nearly 30 years.

In 2001 he began ministering with the Farmers Branch Church of Christ in the suburbs of Dallas. Today “The Branch” is a multi-site congregation of 2,500 members with campuses in Carrollton and Farmers Branch.

Seidman is a sought-after speaker. His most recent book, co-authored with Josh Graves, is “Heaven on Earth: Realizing the Good Life Now.”  He also authored “Before Stones Become Bread: Becoming More like Jesus by Resisting Temptation.”

He is married to Tara, also a graduate of ACU. They have three grown sons, Skyler, Garrison and Cooper.

What is your philosophy of preaching?

The aim of my preaching is that people would see Jesus. The philosophical approach to my preaching might be summed up by what Paul said in 1 Thessalonians 2 — he loved them so much that he was delighted to share the Gospel and his life as well.

I’ve found that people lean in when I open up and reflect upon how the word or insight that I’m sharing has intersected with my life personally – for better or for worse.

Strategically in my preaching, I want the message to have three features:

• What could God be saying through this text in its context?

• What does this have to do with Jesus?

Do you have an annual preaching plan?

I try to have five themes over the course of a year, but it doesn’t always work out that way.

I want one series that revolves around the cross of Christ. It could be a series on Jesus’ seven statements from the cross, or the passion narrative of the gospel, or what Paul had to say about the cross in his letters.

A second theme is a series having something to do with the kingdom of God for the simple reason that this is what Jesus preached. The kingdom was his favorite subject.

A third theme is some kind of expository series through a particular book of the Bible.

Credibility is a huge variable in the preaching moment. People are fact-checking with Google, Snopes, or whatever else while you are preaching.

A fourth theme is more theological, such as something on the nature of God, his sovereignty or the fear of the Lord, or the Spirit of God.

A fifth theme is a series that addresses something that is going on in our contemporary culture. For example, last year I did a series on technology and its relationship to spirituality and to the building of community. Technology is advancing faster than we know what to do with it. I called the series “Present: Learning to be Where You Are.” Our relationship with technology and various devices and screens has a lot of leverage in what’s happening in our culture today.

What kind of challenges do preachers face today?

There have always been challenges to the preaching moment, though they may change from generation to generation. One of them today is attention span. At the same time, I also realize that five minutes of boring is five minutes too long, and 30 minutes of engaging or fascinating is not long enough. Attention spans are a variable, but then so are the preparation, passion and capacity of the preacher.

The other thing that makes preaching today difficult is that everybody has the capacity to fact check everything the preacher says, while the preacher is saying it. Credibility is a huge variable in the preaching moment. People are fact-checking with Google, Snopes, or whatever else while you are preaching.

How do you try to make sermons relevant to four or five generations sitting in your audience?

In most every sermon I write, I am always thinking about somebody who is at church for the first time and is potentially not a believer or has very little frame of reference in regard to Scripture. I try to have something in my sermon that might speak to someone in that situation.

I have found that older generations appear to have an appreciation for more of a teaching or didactic approach, whereas the younger generation seems to regard a story or narrative approach.

The other day I had a woman who just started attending ask me, “So how did Jesus die a second time?” She had assumed he had died again after his resurrection. I wish you could have seen her eyes when I shared with her the rest of the story and why it matters.

In terms of multiple generations, I try to be relevant to the younger generations by being more autobiographical in my illustrations. Most everyone has a great appreciation for preachers being transparent and drawing upon illustrations from their own lives.

What advice can you give to us as listeners on how to get the most out of a sermon?

Seek answers to these two questions when listening to a sermon: “What is God saying through this text? Where is Jesus in this?” And, “What am I going to do about it with the help of the Holy Spirit?”

I think any listener also has to come with a spirit of graciousness and understanding that the one doing the speaking is a cracked vessel and doesn’t have a monopoly on the truth. The preacher speaks in part and sees in part, as Paul recognized in 1 Corinthians 13.

How do you and your wife share in this ministry?

There is so much ministry that my wife does apart from me. Her spiritual antennas are so much more attuned than mine.

I think perhaps the most effective ministry we do together is in our living room and also following our services when we receive people for prayer. To be with my wife when she is praying for people and both hearing their heart while also tapping into the heart of God and melding that together in prayer is a beautiful thing.