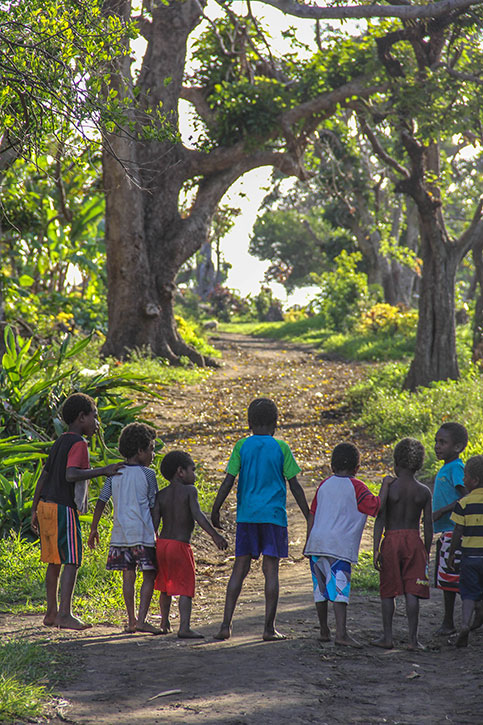 In the South Pacific nation of Vanuatu, a decade of island ministry yields growth — and lessons about living simply for God.

Erik Tryggestad
President and CEO
LOUN, Vanuatu — From this mountaintop village you can see — and hear — for miles.

On a Sunday afternoon a handful of barefoot, dark-skinned Melanesians lead Eric Brandell down a tiny path to their garden. Deftly, they navigate tangled roots and knee-high vegetation as children weave in and out of their path, giggling.

Occasionally, the distant growl of a motorbike engine interrupts the sound of waves from the South Pacific, 900 feet below.

Above, swallows and parrotfinches chirp and flit among the branches of massive banyan trees. 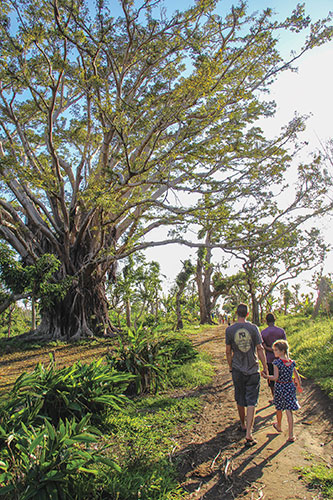 Near the village of Loun, Vanuatu, Eric Brandell and his 7-year-old daughter, Lexi, walk with church members. (PHOTO BY ERIK TRYGGESTAD)
“As a missionary, you come to teach, and you end up being taught,” says Brandell, who moved from the U.S. to Vanuatu 10 years ago with his wife, Shawnda, to “sarem Gud Nius” (pronounced “share-em Good News”). That’s “share the Gospel” in Bislama, a Creole mix of English and French that serves as the language of commerce among Vanuatu’s 83 islands.

Related: Souls matter here — A lot of us can’t find Vanuatu on a map. God can. Read Erik Tryggestad’s Road Notes.
The country has more than 100 indigenous tongues. This island — Tanna — has at least eight.

“I have more secular education, more Bible education, than people do here,” Eric Brandell says, “but they know how to live life. They’re much more in touch with creation.”

In the garden, one of the Melanesians, John Iata, grins as he pulls a giant head of lettuce from the volcanic soil — salad to accompany tonight’s dinner of rice, sweet root vegetables and coconut milk. He leads the group back to the huts where his family lives and worships.

“A lot of times,” the missionary says, “I think the way they live is the way God intended for us to live.”

“As a missionary, you come to teach, and you end up being taught,” says Eric Brandell, who moved from the U.S. to Vanuatu 10 years ago with his wife, Shawnda, to “sarem Gud Nius” (pronounced “share-em Good News”). RELATED COVERAGE: https://www.christianchronicle.org/article/share-em-good-news

SURVIVORS OF A 10-YEAR MISSION
As the sun sets and Vanuatu’s flying foxes — fruit bats — circle the night sky, the Loun Church of Christ gathers in one of the huts, walled with woven strips of bamboo. As they sing a cappella hymns in Bislama, Iata slides small, solar-powered lights into the thatched roof so the Christians can see the pages of their weathered hymnals. 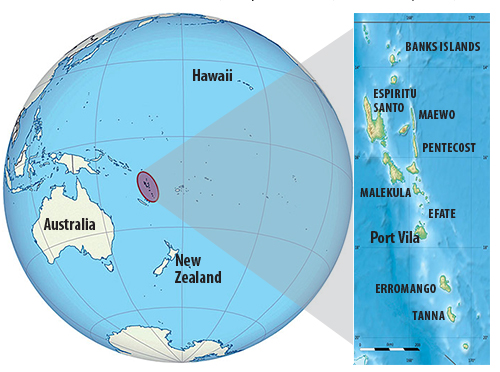 REPUBLIC OF VANUATU
POPULATION: 272,264; languages: Bislama, French, English and more than 100 local tongues; RELIGION: 70 percent Protestant, 12.4 percent Catholic, 17.6 customary beliefs, other.
HISTORY: Once known as the New Hebrides, this archipelago of 83 islands was governed by a “condominium” of France and the United Kingdom, until independence on July 30, 1980.
CHURCHES OF CHRIST: Robert Martin made initial contacts through Bible correspondence courses sent from nearby Fiji. In 1979 John W. Hall moved to Vanuatu and helped plant churches. Edwin Crookshank followed. Randy English makes regular visits from American Samoa. Tobey Huff is building a ministry training school. There are about 15 Churches of Christ meeting in Vanuatu.

SOURCES: CIA World Factbook, “Churches of Christ Around the World” by Mac Lynn, images via Wikimedia Commons
The nation of 272,000 souls, about 1,200 miles northeast of Australia, rarely makes the news, though it was the setting for a season of  “Survivor,” the reality TV competition, in 2004.

That same year the Brandells and coworkers Aaron and Cindy Baker and Mike Olson formed Mission Vanuatu. The team trained at Bear Valley Bible Institute in Denver and moved to Vanuatu’s capital, Port Vila, on the island of Efate, in 2005, overseen by the Columbine Church of Christ in Littleton, Colo.

They introduced themselves to the Churches of Christ on Efate and practiced their Bislama. 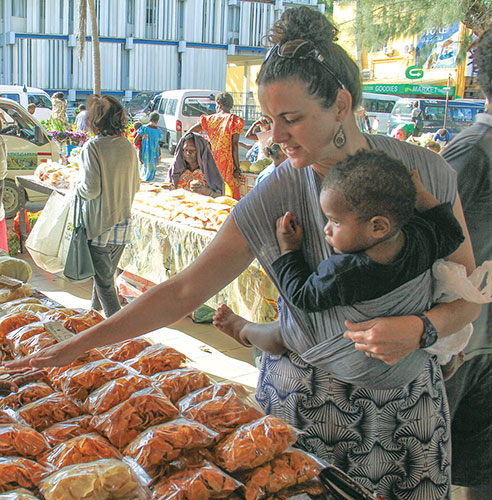 In Port Vila, Shawnda Brandell shops with her youngest son, Grayson, in an open-air market. One U.S. dollar is worth about 100 vatu, Vanuatu’s currency. (PHOTO BY ERIK TRYGGESTAD)The church is one of four the missionaries serve on Tanna — an island with no paved roads or cities in the southern reaches of Vanuatu.

They also shopped for vegetables in Port Vila’s open-air market. There, a woman named Leimawa Tabawa met Cindy Baker. They became friends and studied the Bible. Tabawa and her husband, Sam, were baptized.

That chance encounter in the market proves that “God had a plan before he created us, definitely,” says Sam Tabawa, now a leader of the Etas Church of Christ, which meets on mats under a sheet-metal roof about 15 minutes from Port Vila. The Tabawas, natives of Tanna, told the missionaries of their desire to “sarem gud nius” with their families back home.

The Bakers moved to Tanna for a year, where they continued to meet people in the markets and study the Bible. A few members of the Etas church from Tanna moved back to the island to help launch new congregations. 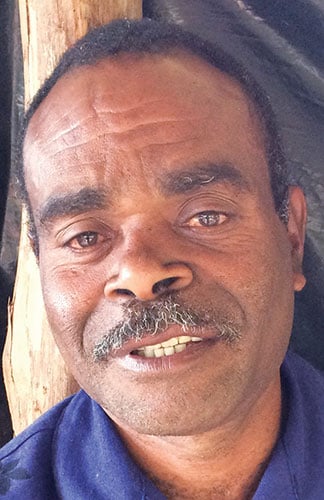 Sam Tabawa
Olson, meanwhile, moved to the island of Espiritu Santo to work with Christians there. The Brandells moved to Malekula and worked with two newly established churches for three years.

Olson and the Bakers have since returned to the U.S. In 2014 the Brandells moved back to Port Vila and now make regular visits to churches across the islands. The Bakers also make mission visits.

In 2015 the Brandells became disaster relief coordinators after Cyclone Pam swept across Vanuatu. The Category 5 storm destroyed buildings and crops — particularly on Efate and Tanna.

Churches of Christ in Australia, New Zealand, the U.S. and across the region sent funds and containers of supplies to help Christians here as they replanted their gardens.

“They began to pick up the pieces immediately,” Eric Brandell says, standing in front of the Loun church’s meeting place. When the cyclone knocked it down, the Christians merely stood it back up and repaired what was damaged.

The “new” hut is about 20 percent smaller than before, the missionary says. It’s also fuller, as the church’s response to the storm has attracted visitors and a few who had fallen away. The Christians hope to build a more permanent meeting place with concrete and sheet metal soon.

“It was a very trying time,” Eric Brandell says of the storm, “but I think they’ve come through it quite spectacularly.” 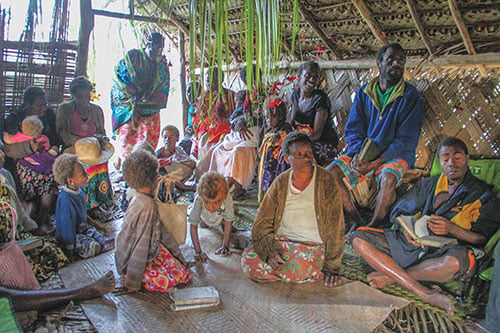 Members of the Church of Christ in Loun village on the island of Tanna gather for a Sunday night devotional as they welcome Eric Brandell. The church rebuilt its meeting place after Cyclone Pam destroyed it in March 2015. (PHOTO BY ERIK TRYGGESTAD) STRUGGLES OF A CHRISTIAN NATION
After a decade of ministry in Vanuatu, the Brandells “know about our culture, know about our country,” says Eddie Karris Kalokul, age 84, one of the first members of a Church of Christ on the islands.

Missionary Edwin Crookshank baptized Kalokul on Jan. 19, 1981 — at midnight so members of the Presbyterian church where he formerly served wouldn’t find out. 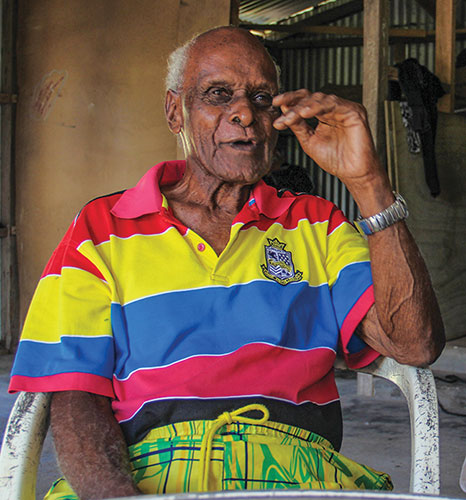 At his home, Eddie Karris Kalokul talks about his baptism in 1981. (PHOTO BY ERIK TRYGGESTAD) Now Kolokul, who judges land disputes and worships with the Eton Church of Christ near Port Vila, is bolder about his faith.

He wants to follow only what he reads in his Bible, a well-worn book with a cracked cover that sits on his desk next to a copy of a biography of Nelson Mandela.

More than 80 percent of his countrymen claim Christianity as their faith. Protestant churches are active. Seventh Day Adventist and Mormon churches are growing.

Vanuatu has a large number of adherents among churches of the Stone-Campbell movement, mostly instrumental Christian Churches/Churches of Christ.

But many here are Christians only “in lips,” Kalokul says. Though they worship on Sundays, they don’t live out their faith during the week.

Sunday worship with the Etas Church of Christ in Vanuatu

Sunday worship with the Etas Church of Christ in the South Pacific nation of Vanuatu. (The language is called Bislama, by the way)

Posted by The Christian Chronicle on Tuesday, August 25, 2015

“No! A Christian country is the people who live in Vanuatu.”

Kava, a locally produced alcoholic beverage, “is the No. 1 religion in Vanuatu,” he says. Spousal and child abuse also plague the islands.

“I see them from my window — they struggle for life,” he says of those who pass by on the highway between his house and the South Pacific beach. “They say they are Christians, but the blessing has run away from them. …

“But I’ve never seen the righteous forsaken, or (God’s) children in want of bread.”

Kolokul continues to live for Jesus, even after the recent death of his wife of 57 years, Nettie. Another missionary, Tobey Huff, preached the funeral.

“I know she’s waiting for me … in the bosom of Abraham,” Kalokul says. “I’ll meet her soon.

“I have a house there whose builder and founder is God, and I hope to go there one day and see all my brothers and sisters, thank you very much.” 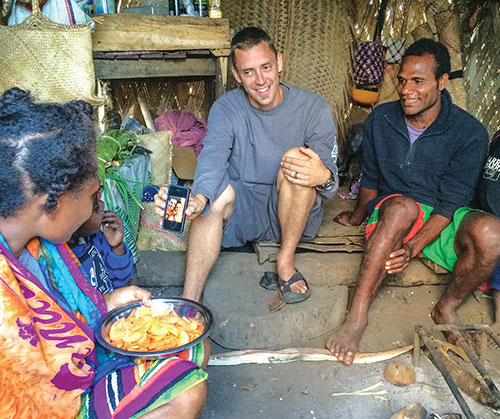 Eric Brandell shares pictures of his family with Christians in the village of Iatakun on the island of Tanna. Brandell and his wife, Shawnda, currently work with 11 Churches of Christ on five of Vanuatu’s 83 islands. (PHOTO BY ERIK TRYGGESTAD) THE MISSION CONTINUES
Back on Tanna, after visiting the Loun congregation, Eric Brandell treks to the village of Iatakun to conduct a weeklong Bible study.

Focusing on Philippians, he talks about the “bigfala trip blong Pol,” Bislama for the apostle Paul’s missionary journey. The men and women listen and take notes.

Teaching the Gospel in Vanuatu

Eric Brandell launches a week-long Bible study with members of a Church of Christ in the village of Iatakun on the island of Tanna, Vanuatu. RELATED COVERAGE: https://www.christianchronicle.org/article/share-em-good-news

People here live a simple life, the missionary says, and he wants to help them practice simple Christianity, free of manmade doctrines, and to bless the lives of their spouses, children and neighbors as God blesses them. 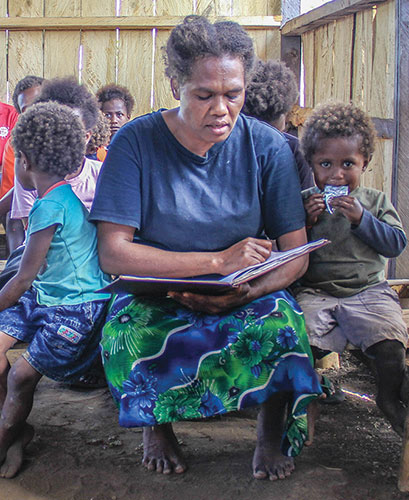 The Iatakun Church of Christ hosts a welcome devotional for guests. (PHOTO BY ERIK TRYGGESTAD)The Brandells have entered a new phase of their mission, overseen by the Perkins Church of Christ in Oklahoma. As they nurture young churches, they are producing Bislama-language resource materials including study guides and Bible dictionaries. They want to develop more contacts, eventually touching souls on Vanuatu’s 12 most-populated islands.

The Iatakun Church of Christ is dedicated to the task, says Antoine Kamoi, a member of the congregation. Studying the Bible for a week means they can’t work in their fields and harvest vegetables to sell — their lone source of income.

It’s a sacrifice, Kamoi says, but “people must know that Christ’s church is the way, that you can hear the message and believe it.”